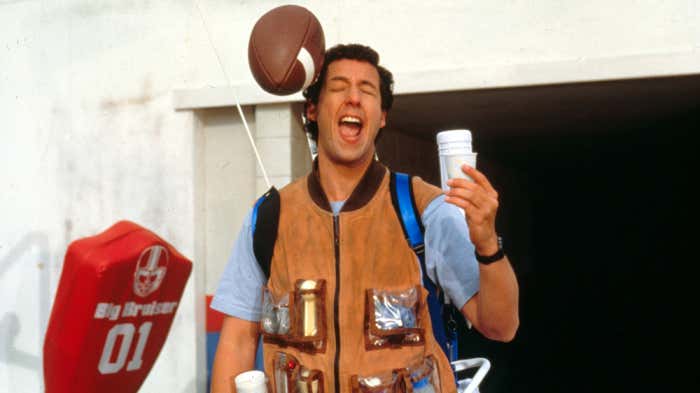 LA Times – Allegations that two students at Bernstein High in Hollywood spiked the water at a junior varsity football practice with a male enhancement drug prompted an investigation that led to the dismissal of varsity coach Luis Barajas.

The investigation of the July 12 incident discovered that Barajas had failed to notify school officials or parents that players had possibly ingested contaminated water until two weeks later, according to a report The Times obtained through the Public Records Act.

Let’s look at this story from a few different lenses before we form any opinions as to whether this coach deserved to be fired.

First and foremost, that’s a hilarious prank. I’m sorry to the kids and parents involved but it’s true. A tremendously huge part of me wishes that the JV squad would’ve actually drank all the spiked water when this happened so we could be sitting here sifting through all the first-hand accounts of what happened that afternoon on the practice field.

“Well, everything was fine at first,” Johnny, the starting JV quarterback said. “The water tasted kinda funny but it always tastes funny because we fill it from a hose behind the gym. Next thing I know, my cup is feeling really tight in my practice pants. I didn’t think much of it until I found myself changing coach’s plays so I could get out of the shotgun and place my hands under center.”

“Yeah, I mean Johnny and I always joke about it when he puts his hands there,” Anthony Martinez, who plays center for the Bernstein High JV Football team, added. ” I’m always like ‘bro! don’t get comfortable!’, but today something felt, I don’t know, different? It was like all of a sudden I felt comfortable with my best friends hands placed tenderly between my legs, his fingers tickling my taint.”

Okay sorry I may have gotten carried away there, but you can’t tell me hearing these kids talk about being overwhelmed by sexual urges while walking through a new tweak to their halfback power play wouldn’t be fucking hysterical.

From a parent’s perspective, it’s obviously a nightmare. You can get male enhancement pills at pretty much any gas station across the country, and most of them are probably filled with a bunch of shit none of have ever heard of. We have no idea how these kid’s bodies and hearts would’ve reacted after ingesting this stuff and then being put through a high intensity football practice. It could’ve been fine, but it could’ve also been very bad.

Finally, from the coach’s perspective, I can’t wrap my head around why Luis Barajas thought it’d be a good idea to just bury this whole situation and think it’d go away. It’s not like he was the one who put the fucking boner pills in the water bottles; it was 2 kids on his team. He should’ve immediately kicked the kids off the team and gone right to school officials.

I suppose you could make the argument that trying to act like all of this would just go away is an ultimate “football guy” move. I’m sure he’s smart enough to recognize how potentially serious it could’ve all been, but in the end no one actually drank the water and he’s got a fucking game to get his boys ready for. It’s hard enough trying to toughen his team up when everyone is horrified of concussions these days; I’m sure he felt that by getting parents and school officials involved it would’ve been much too large of a distraction for his team to overcome.

Oh well. Hindsight is 20-20. The damage is already done, and Luis Barajas lost his job after sitting idly on his hands. It’s a damn shame, because I can think of a few NCAA coaches who have done far worse and kept their positions. I suppose winning cures all, maybe even a few adolescent erections hiding beneath a few layers of sweaty, hand-me-down football equipment. I guess we’ll never know for sure.