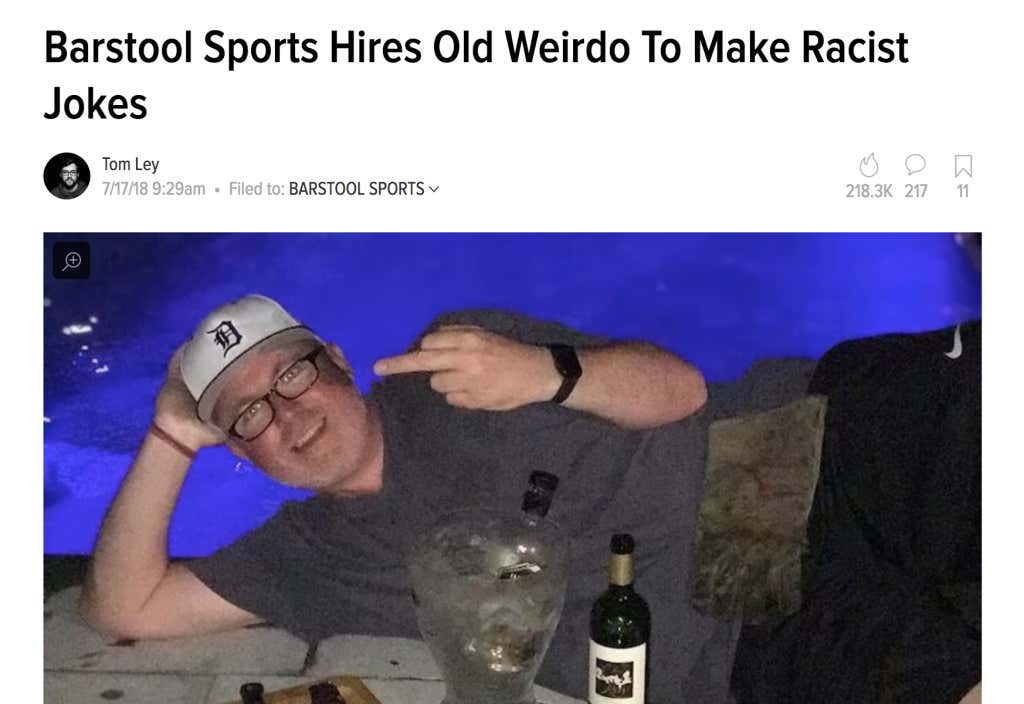 and insinuating Barstool employees can’t support transgender rights because they made a joke once.

The answer is, yep you guessed it, shaming superheros for helping cops. 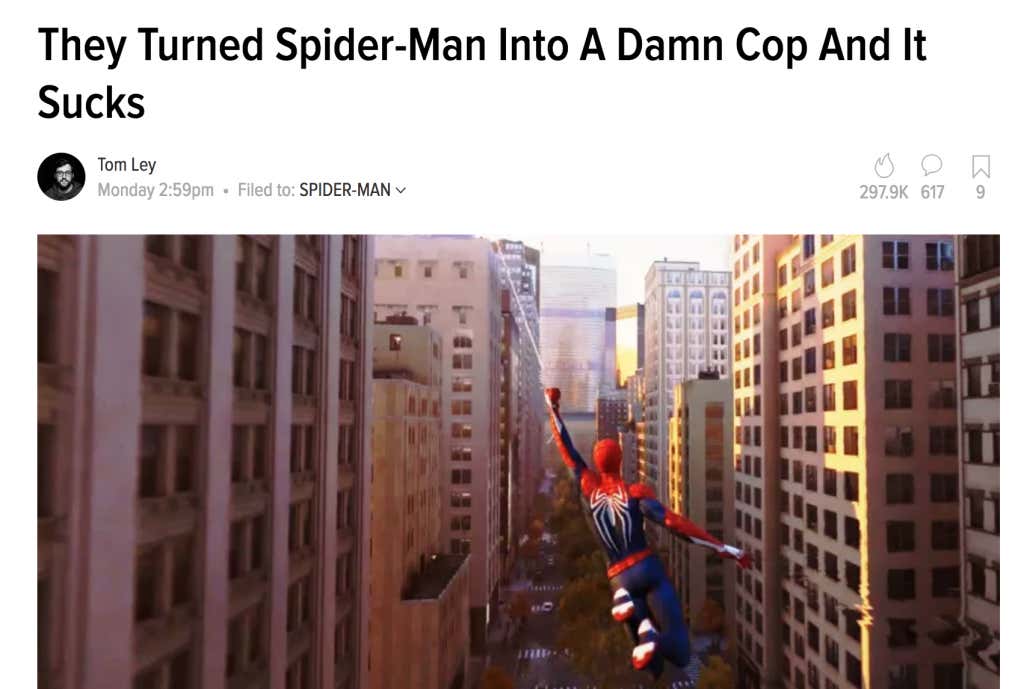 (DeadSpin) The new Spider-Man video game came out for PlayStation 4 last week, and I was eager to spend a chunk of my weekend playing it. Some things I immensely enjoyed during my few hours of play time: web swinging, jumping off buildings, web swinging, whispering “whoa, that looks just like the real Empire State Building,” and web swinging. One thing I definitely did not enjoy is how the game turns Spider-Man into a friggin’ cop!

Granted, I am only a few hours into the game, but so far the primary objective boils down to Help The Cops. Not just any cops, either, but the NYPD specifically, because the game takes place in a true-to-life rendering of New York City. It’s dumb to expect video games to be responsible reflections of real life, but it is also impossible, for me at least, to not feel some ickiness about the game forcing me into cahoots with even a fictionalized version of the NYPD, an organization that routinely oppresses some of the most vulnerable residents of the city I live in.
Besides the few story arcs where Spiderman goes rouge and turns into an emo bitch

has there ever been a time that Spiderman has not helped the cops? Hardcore comic book buffs will probably be able to dig up a few examples but the fact of the matter is that the vast majority of  Spiderman storylines end with him tying criminals up in webbing and handing them over to the cops. He’s your “friendly neighborhood” Spiderman, not your “vigilante criminal murdering” Spiderman who captures bad guys and then tortures them in his aunt’s basement. Hell even Batman, who’s supposed to be more of an “above the law” badass, almost always lets the cops handle it after he punches villains in the face a bunch of times. I mean for the fucks sake Batman’s biggest ally is a cop that uses a giant spotlight to summon him whenever he needs help. 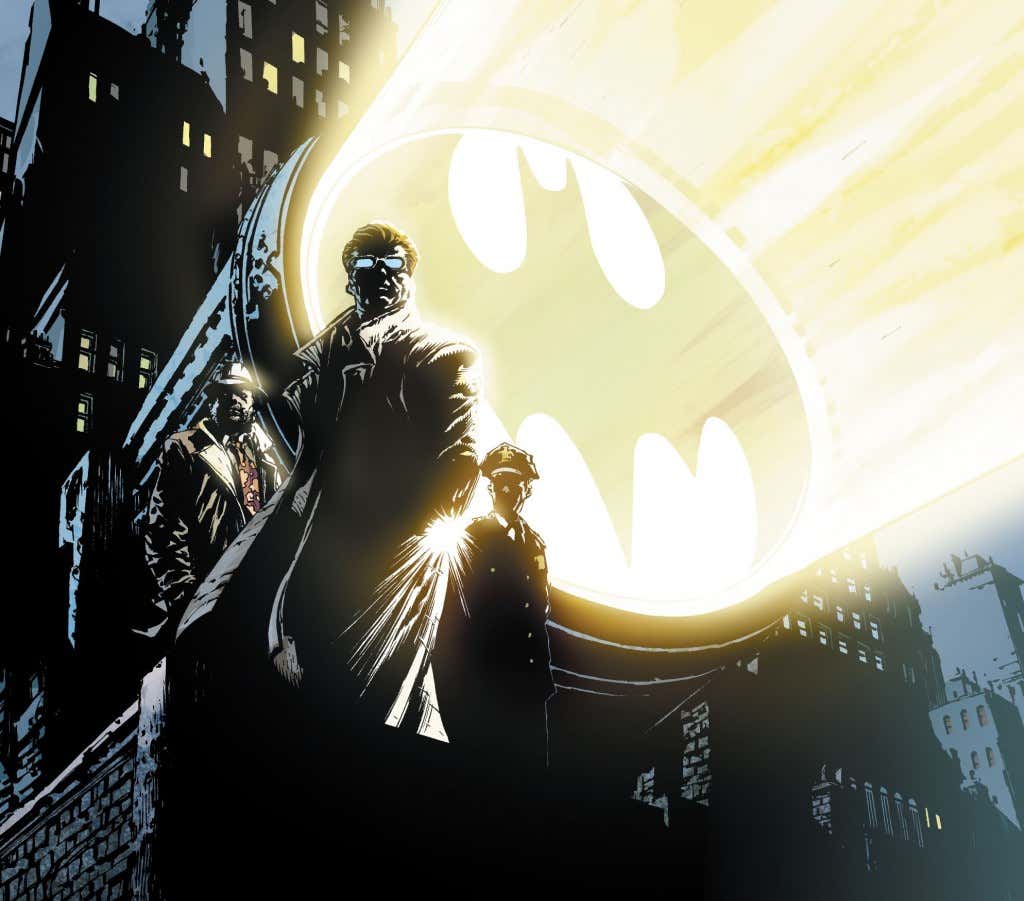 Spiderman helping cops in a video game form though, is apparently where Tom Ley draws the line.

“Spider-Man deserves better than to be allied with such forces. A big part of the character’s appeal is that he is just as much under the thumb of the city as the people he tries to help. He’s from a shattered family, he works multiple jobs, he can’t pay his bills, he’s stressed out all the time. He’s not a hero who swoops down from on high in order to save the commoners from themselves, he is a commoner. Therein rests everything that is inspiring about the character; he’s just a guy who wants to make life better for the people who are dealing with the same struggles he is.

What this new game does is put Spider-Man up on a perch where he doesn’t belong. He’s no longer performing heroic deeds out of just the goodness of his heart, but also for the purpose of solidifying the existing power structure’s grip on the city.

O man, I just hate it when Spider man swoops down to save commoners! Next time I’m being mugged on the streets of NYC I’d prefer it if he just walked up to me and gave me a lecture on how the NYPD has some corrupt cops that don’t have my best interest at heart. Uhh thanks Spidey but I’m about to get robbed and shanked in the back, would you mind ejaculating out of your wrists all over my assailants face before that happens? Thankfully, the entire twittersphere also agrees that Tom Ley is a GIGANTIC asshole. 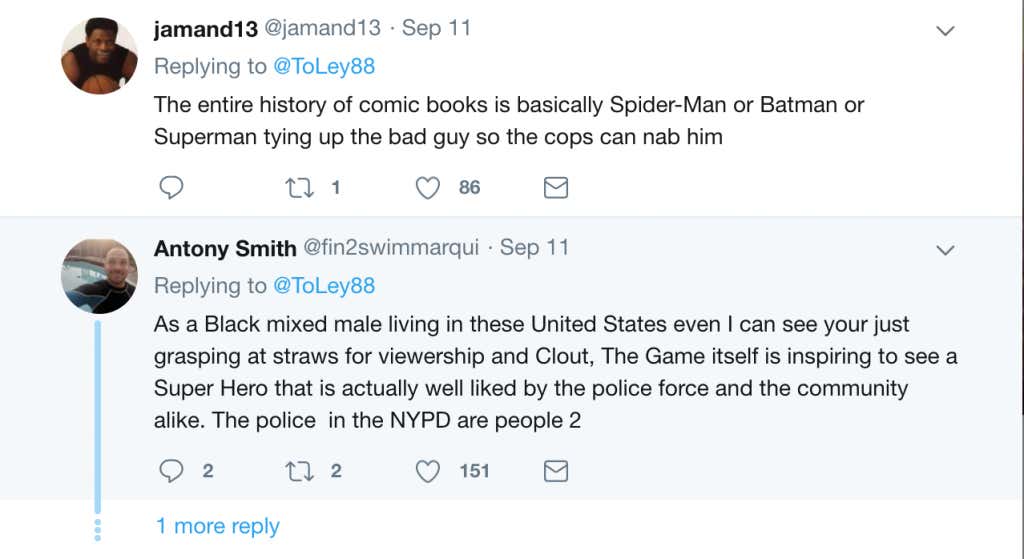 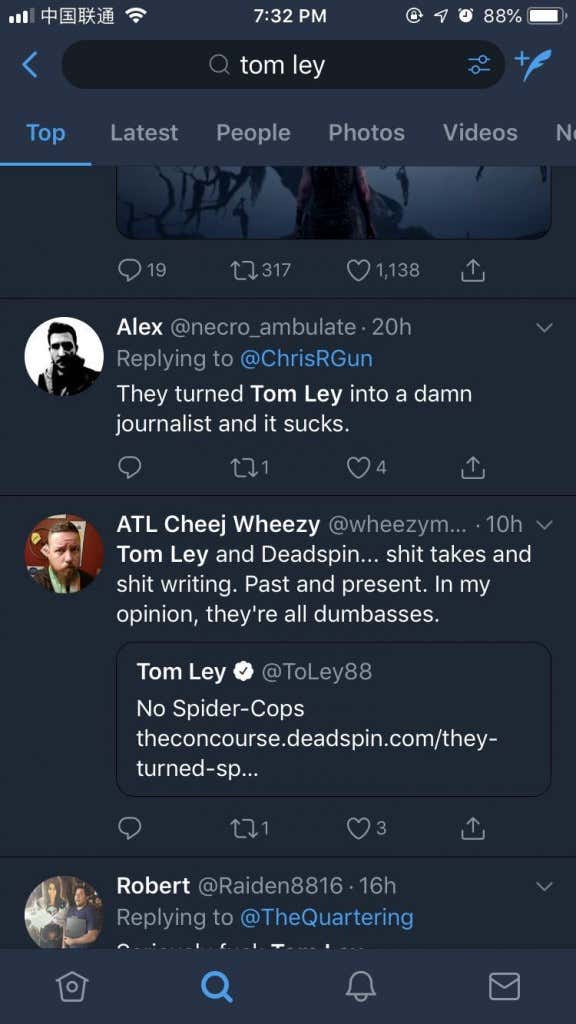 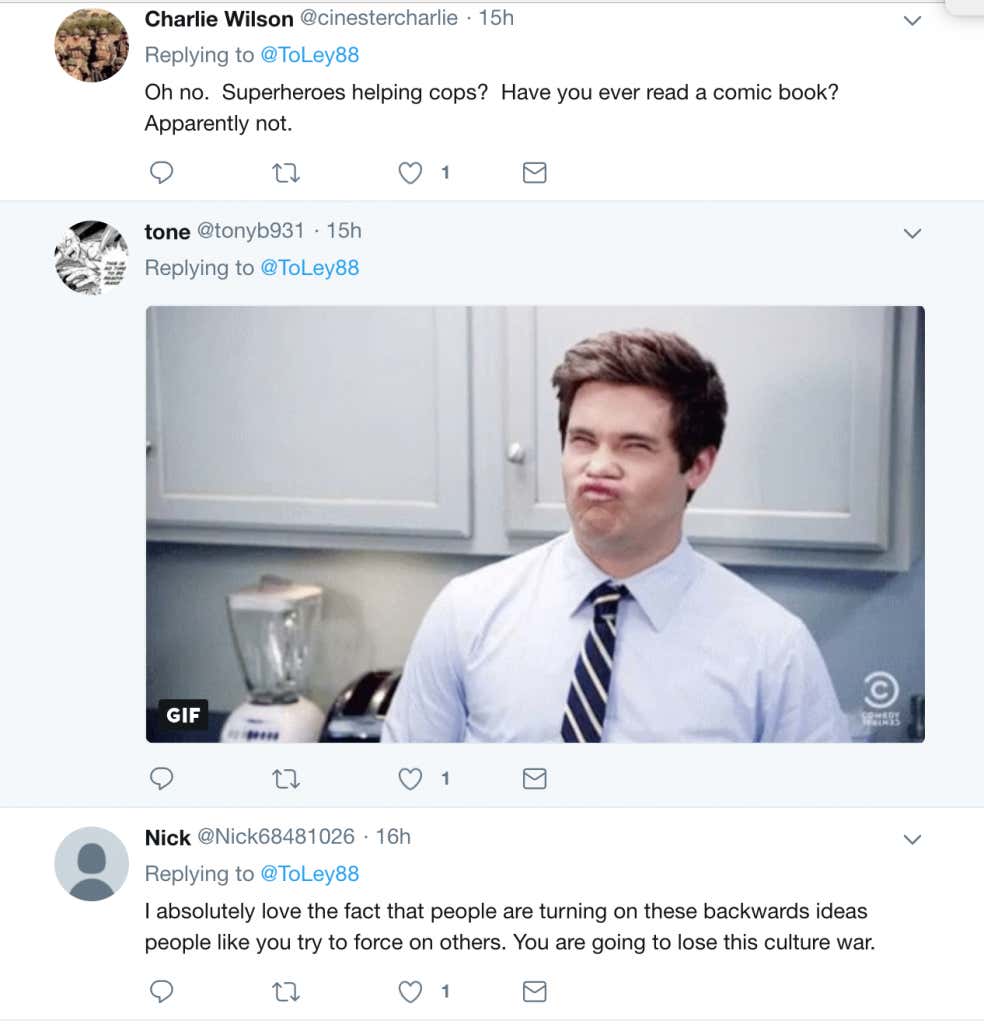 Barstool really needs to get back in the mud to give those losers at Deadspin something to write about again. At least Barstool gets some more brand recognition every-time they write a hit-piece.

Oh and while Tom Ley was getting his panties in a bunch over the fact a superhero in a video game had the audacity to help cops, lets see what Barstool’s resident “racist old weirdo” was writing about. 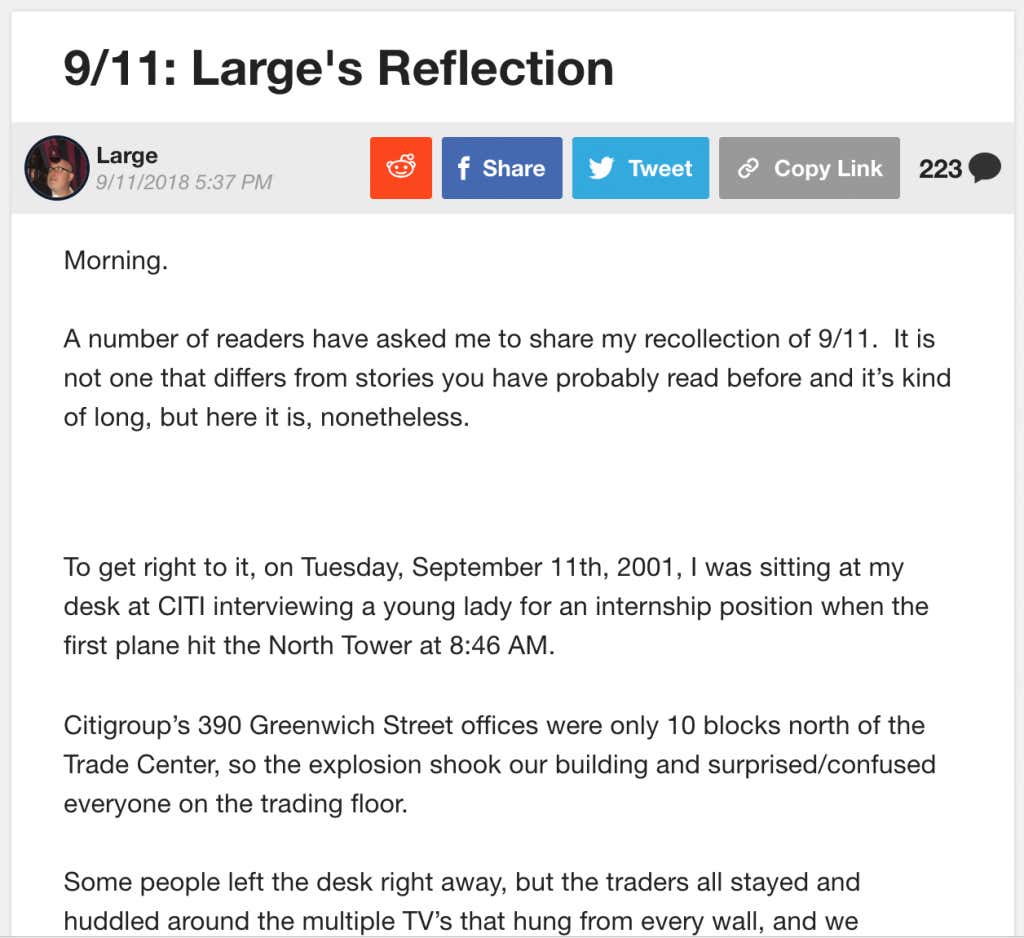 Oh just a personal heartfelt account of the way September 11th impacted his family. September 11th, when 71 NYPD members lost their lives trying to save civilians from a heinous terrorist attack. Dozens more have passed away in the years following 2001 as the direct result of illnesses contracted while working in the hazardous conditions immediately following the attacks. At least we can be thankful that Spiderman wasn’t helping them that day. Fuck off Tom.