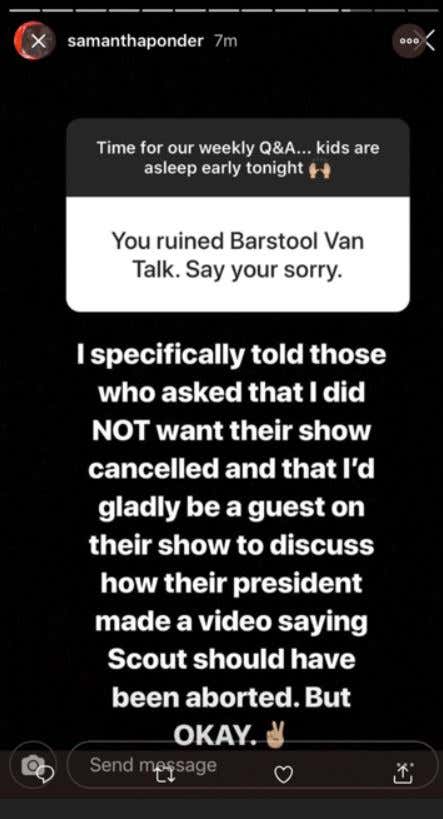 So Samantha Ponder posted this today on her Instagram story. Listen I’ve never truly hated Sam Ponder for what she did to BVT before today. She was just a vindictive asshole who held a grudge against Barstool for things Dan and I said about her ruining Gameday on a pick em podcast 4 years prior to the ESPN partnership. I will never hate somebody for holding a grudge. That would be hypocritical of me since I’m the greatest grudge holder of all time. She wanted to sabotage us at the expense of her own company and that’s exactly what she did.

But I don’t think even she understood what she was doing. She didn’t understand the grave she dug for herself and her career. Now Stoolies DESPISE her. PMT fans DESPISE her. She alienated the very audience that ESPN needs so desperately and why they turned to us in the first place. And now she is feeling the heat. Her rankings and likability are in the toilet. Her career is in the toilet. Our fans of which there are many will never forgive her. So with her back against the wall her true colors are showing. She is now resorting to bold faced lies. Yes I confirmed with Dan that she NEVER offered to speak with them. In fact it was quite the opposite. She flat refused to speak with them.  She demanded the show be cancelled. Of course nobody can ever prove that point, but trust me if they could have talked to her or had her on the show at the time they would have.  If she didn’t cause a stink at ESPN BVT would be on Season 2 right now.

But what can easily be proven is the fact I NEVER said anything remotely similar to wanting her to abort her kid. It’s insanity to put such a clear lie in writing. But this shows you the type of person we are dealing with.   Not only is she a dishonest scumbag, but she is so insane she thinks she lie like this without being called out for it. Hey Samantha you managed to find the tape of everything I ever said or wrote negative about you in the past so where is this magical quote? Oh right you can’t find it because it never happened so you don’t have any proof of it. And spare me the song and dance that I deleted it because we haven’t deleted anything we’ve said about you.  The bottomline is I know when something sounds like me and I never use the word abort and I didn’t even know your kids name. There is 0.0 chance I said this. It’s slander plain and simple. And this is the woman who ruined ESPN’s future with Barstool Sports? A liar plain and simple.  When you lay with dogs you get fleas.  What does your god say about lying? Isn’t that a sin? For shame Samantha. For shame.