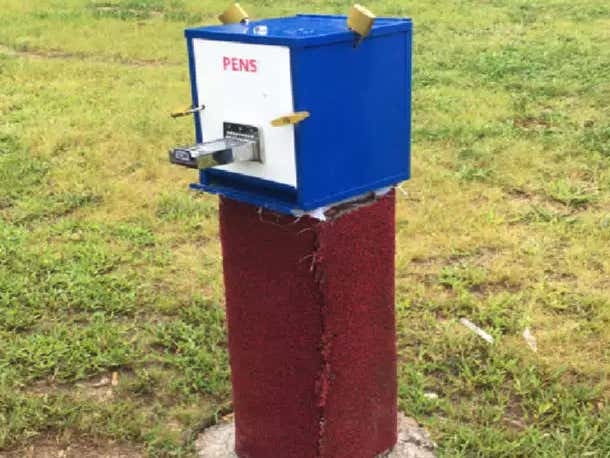 ABC- Town of Brookhaven officials and Suffolk County police are trying to figure out who placed three potential crack pipe vending machines, dubbed as pen vending machines, in Coram and Medford. The town received complaints about the machines over the weekend. Two of them — one of which had partially destroyed by community members — have been removed.

The blue and white vending machines, which featured the words “Sketch Pens” on the outside in black and red font, were mounted in cement into the ground and would dispense a small glass tube and a filter. Included was the top of a pen, which could be put into the glass tube to form a pen, along with an ink tube. The “pens” cost $2 each, and the machines would accept the payment in the form of eight quarters.

I’m not really sure if this needs to be said or if it’s just implied at this point, but crack is bad. Like really bad. I am taking an official stance of being against crack and all crack related activities since I learned as a young man in D.A.R.E. that crack kills and was reminded as an adult just how addictive it could be by Dee and Dennis Reynolds.

However, you have to respect the entrepreneurial spirit of the people that installed these vending machines selling very legal pens in such a high traffic area without having to spend money or jump through red tape for one of those pesky permits. The father of capitalism Adam Smith must be proud as punch to see that kind of initiative being taken in a free market and it has nothing to do with the fact that Smith was a huuuuge crack guy. The design of the dispensers are as elementary as they are impressive. Take a basic box, add a shitload of cement, a laundry machine widget, and as many locks as possible since any crack fiend will eat through metal like a bull shark if all he needs is a pipe to get his fix and for less than $100 at the hardware store, you are cashing in on the crack game, which as every rapper I listened to as a youth tells me, is pretty much a license to print money.

That being said, I do hate seeing this happen in my beloved New York State and have a message to everyone building these machines (Replace “throwing anything onto this field” with “building crack pipe vending machines”, “Cleveland” with “Baltimore”, and “Cincinnati” with “New York”).