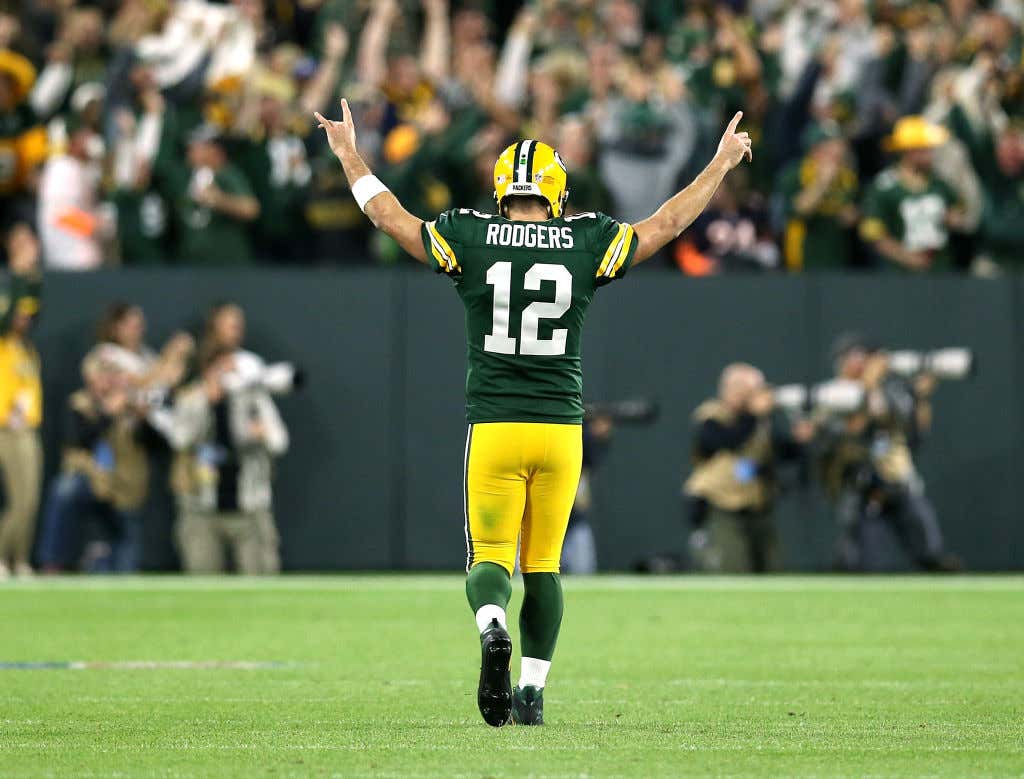 I don’t want to take anything away from Aaron Rodgers’ performance last night. It was everything you’d expect to see out of one of the best to ever do it. The moment Michele Tafoya said that he was going to “give it a try” after halftime, everybody watching that game knew that we were going to be in for a show. Everybody thought to themselves, “imagine if this dude comes back and actually wins this game for Green Bay”. And then what did Aaron Rodgers do? He did exactly that. Now we may never know what really happened to Rodgers’ left knee/leg in that first quarter and the chances we get the actual diagnosis before his season is over are probably sitting at 0%. But it was enough of an injury to have him carted off the sideline before the half was over so we have to assume it was at least semi serious. But after some work in the locker room (read: shots), he was ready to go for the 2nd half and led his team to victory. It was awesome.

Hockey players do this all the time and I don’t see any of them getting their D sucked quite as hard as Rodgers was receiving figurative fellatio from the sports world last night. And again, I’m not taking anything away from A-Rod’s performance. That touchdown pass to Geronimo Allison was absurd and there are only a handful of other people in the world who can do that. But playing through an injury? Buddy. That is literally every single hockey game that was ever played. If there are 23 players on an NHL roster and 31 teams, that means there are 713 NHL athletes who have played through an injury just as Aaron Rodgers did last night. Torn ACLs, broken legs, a slapshot to the teeth, arms actually falling off of their body. It doesn’t matter. Hockey players play through it all. Unless a hockey player dies, they are going to finish the shift. It’s called being Hockey Tough, you should look it up sometime.

And here is the highest praise that I could ever give Aaron Rodgers. He is a Hockey Tough son of a bitch. If we’re talking about NFL players who could realistically find themselves playing in the NHL, Aaron Rodgers is on the list while Jalen Ramsey is still walking out onto the ice with his skate guards on. So that’s all I’m saying here. Aaron Rodgers isn’t an alien because he was able to come back after that injury and win the game. Aaron Rodgers is just a hockey player who just so happens to play football very well.