Like Big Cat said in the NFC rewind: the NFL Rewinds are back! Are they better than ever? No, probably not. But they’re undoubtedly back.

A TIE! And with that, the Browns are off to their best start since 2004.

Big Ben must’ve put BIG money on the Browns because he was off all day.

James Conner had a big game filling in for Le’Veon Bell, but there’s no doubt in my mind they actually win this game if he had any other haircut.

Bob Wylie’s gonna keep getting this team closer and closer to the promise land one tie at a time.

Imagine the numbers Josh Gordon would’ve put up all these years if Goodell wasn’t such a narc.

This was the best worst game ever. It had everything I needed to stay enamored throughout but was still horrible enough to end exactly like this.

Browns fans cannot wait to get that first Sunday victory under Hue Jackson.

Nathan Peterman is far and away the worst quarterback ever of all time.

I’m not the biggest Josh Allen fan of all time but there’s just no possible way he could be as bad as the Peter Man. I didn’t even know a 0.0 QBR was possible until today. This wasn’t even caught and it was the best throw by anyone wearing blue today.

For Baltimore… is Elite Joe Flacco BACK???

Crazy. They went out and got him decent receivers and he plays better. Weird. Who could have seen that coming.

Crabtree’s so happy to be living on the other side of the country of Aqib Talib.

But don’t fret, Bills Mafia. You may have lost the battle on the field but Ravens fans could never beat you at your true passion.

This one was off to a hot start from the opening kickoff.

In all seriousness it was great to have Andrew Luck back on the field looking healthy. It wasn’t great to see the Bengals try and knock him out for another year.

I’m sure Luck missed playing football. I’m also sure he did not miss getting hit like this.

If Luck is healthy and Ebron is going to be this wide open all year I could see that being beneficial for the Colts, tbh.

Everyone who picked up John Ross after that preseason touchdown catch thinks they’re Bill Walsh now.

For a game that started off rocky it had one of the more competitive second halves of the day. Luck was driving for a chance to win the game in his comeback at home. Storybook shit. Then something named a Clayton Fejedelem decided he was having none of that.

I can’t tell if he’s that fast or if those jerseys just look fast. On turf too? Impossible to be sure.

Nothing like a five hour lightning delay to kick off the season. Surely a great omen for both teams.

Dion Lewis was having some fun during the delay at least.

If I’m the Dolphins moving forward I’m trying to play God with the weather every Sunday because after the extended break they were COOKING.

Shoutout Scary Terry literally opening the season for the Patriots.

Gronk’s spikes get all the publicity but the sassy ass shuffles he breaks out before the spikes are what really get me going.

Speaking of Gronk: this was very clearly not a catch. But it was called a catch. I enjoy the NFL more when they open up the definition of a catch.

Before Jeremy Hill’s leg exploded we learned he doesn’t actually have bones in his arms. Horrifying stuff, honestly.

People freaked out about the Patriots receiving corp all summer just to forget that James White isn’t even really a running back.

Meek Mill and Robert Kraft being best friends is the most confusing yet adorable thing to happen these past few years. To be a fly on the wall to hear these conversations about luxurious watches. 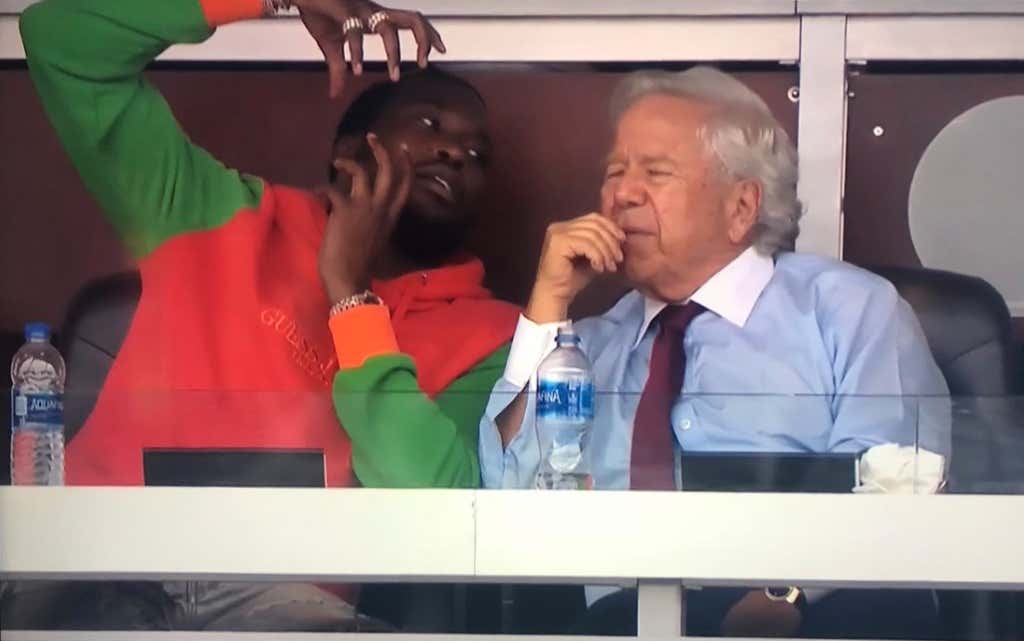 Seeing Janikowski in anything other than a Raiders jersey made me infinitely sadder than I ever could have anticipated.

Seahawks went out, drafted a running back in the first round, and then had Chris Carson gain 43 more rushing yards on the same amount of carries. He also hurdled a grown man, which will always get a guttural reaction out of me in real time.

Von Miller was everywhere and nowhere all at the same time for the entire damn game. How do you even protect against this. COOKIES.

Brandon Marshall is a billion years old and still one of the most uncoverable humans in the end zone.

ESPN’s Fantasy system accidentally gave that touchdown to Brandon McManus for a minute and people were NOT happy. Don’t play with a man’s fantasy points.

The absolute LAST team you want to play in Week 1 is Kansas City. Andy Reid is already the Bye Week God. Facing him after months of preparation is never going to be a good time. Especially when Tyreek Hill does stuff like this.

And also this, as well

Mahomes had plenty of help from his playmakers all afternoon no question. But when you’re dropping it in a bucket to your FULL BACK down the field you get all the credit in the world.

Los Angeles doesn’t give two shits about the Chargers.

Well, except for this guy.

Andy Reid has every short fast guy in the League. He gets down to the red zone and becomes Oregon Chip Kelly. It’s awesome and I have no clue how you stop this.