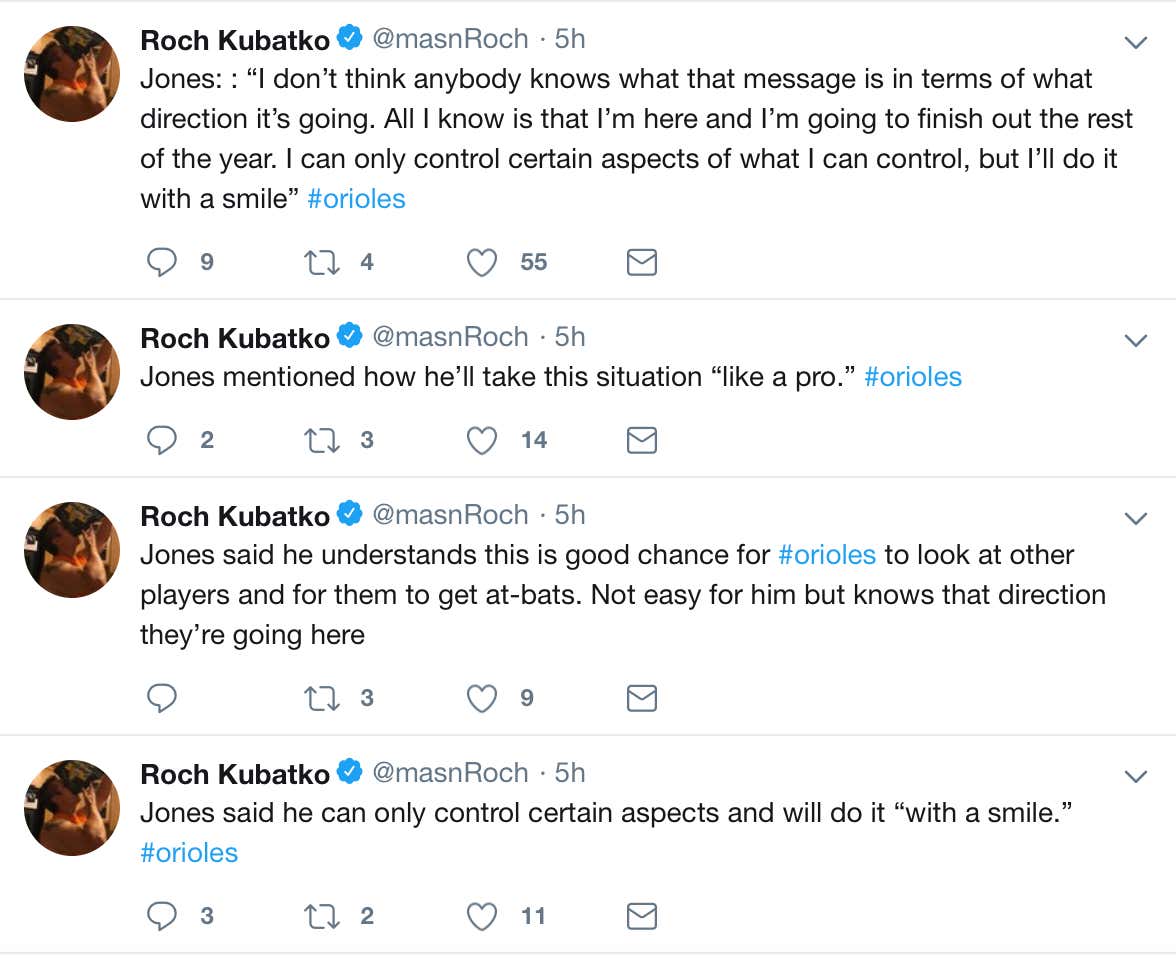 So when your team is 61 games below .500, have 102 losses, has a legit chance at losing 115 games, in the beginning of a rebuild because you traded off every single ounce of talent they had on their team, and their lone highlight of the year came on the last pitch of the first game, you have a right to audition players for the future. You may take a look and see what you have to look forward to in a few seasons, call up some of the young guys, let them play and lets see what they’re made of. That is what the Orioles said they were going to do with Cedric Mullins, a move that Adam Jones accepted and brought on. Fast forward a few weeks later, the team is openly benching Jones, not for performance either. They also aren’t playing Mullins in center field everyday like they said they would, they’re throwing just anyone in the outfield while Jones, the longest tenured Oriole sits on the bench with a smile.

Jones has been with the Orioles since 2008 and has been the man in town since then. He’s the Cap10 on and off the field. Jones has been here for the lowwwwwww low times, he was a huge cog in the winning times, and now he’s here again in the low low times. He openly chose to exercise his 10-5 rights to void a trade to a contending team at the trade deadline, since he has his 10-5 rights (10 years in MLB and 5 with the same team) he can do that. He did this because he supposedly wanted to keep his playing time with the Orioles and not be a platoon guy with, idk maybe the Phillies? Many Orioles fans were upset with Jones for NOT being traded He is a 33-year-old centerfielder who probably should have been playing a corner outfield spot the entire year, the Orioles were not going to get any big prospects for him. I had 0 problem with Jones wanting to stay in Baltimore and finish this season out, and potentially bring him back next season as a mentor.

The Orioles have sat Jones in 4 of the 8 games they have played in September, including the entire Rays series this past weekend. I know what you’re thinking, Tampa Bay turf with an older guy, probably not good for him to be on the turf with his knees, I’m not buying that is why he is out. Could Dan Duquette and the team be trying to punish Jones for NOT accepting at trade a few weeks back? I’d like to hope that a team and front office executive couldn’t be that childish, but man, with this team, you never know.

Again, when they came to Jones and wanted to bring up Cedric Mullins, they said Mullins would be the everyday centerfielder, and Adam would play in right. That has been the case lately, but now they are putting guys like John Andreoli, Jace Peterson, and Joey Rickard out there. I’ll tell you this. Andreoli, Peterson, and Rickard are not the answer for 2019 and beyond for this Orioles team. Why not just let Adam play out his time here in Baltimore instead of benching the longest tenured player and the the guy said no to a potential playoff team to be here? No doubt this is causing tension between Jones and the club, you can read in between the lines of his comments above. He knows he should be playing, but the team wants to see what they have. I would get it if they were playing Austin Hays or Yusniel Diaz, but it’s John Andreoli, give me a break. I also love that Jones has actually been productive this year (.285, 14 homers), but they still throw Chris Davis out there every single damn day. Money talks, I guess.

This team is screwing over Adam Jones and what is likely his last few weeks in an Orioles uniform, let the guy go out on his terms, not riding the pine and lying to our face. Adam is a class act and that is the reason he isn’t throwing a hissy fit like some other players would, he knows that isn’t the right thing to do, so like he said, he’s gonna take this with a smile. I’d love to be a fly on his wall when he gets home though. The season has been over in Baltimore since before the end of April, don’t sugarcoat this. Jones deserves better from this club.