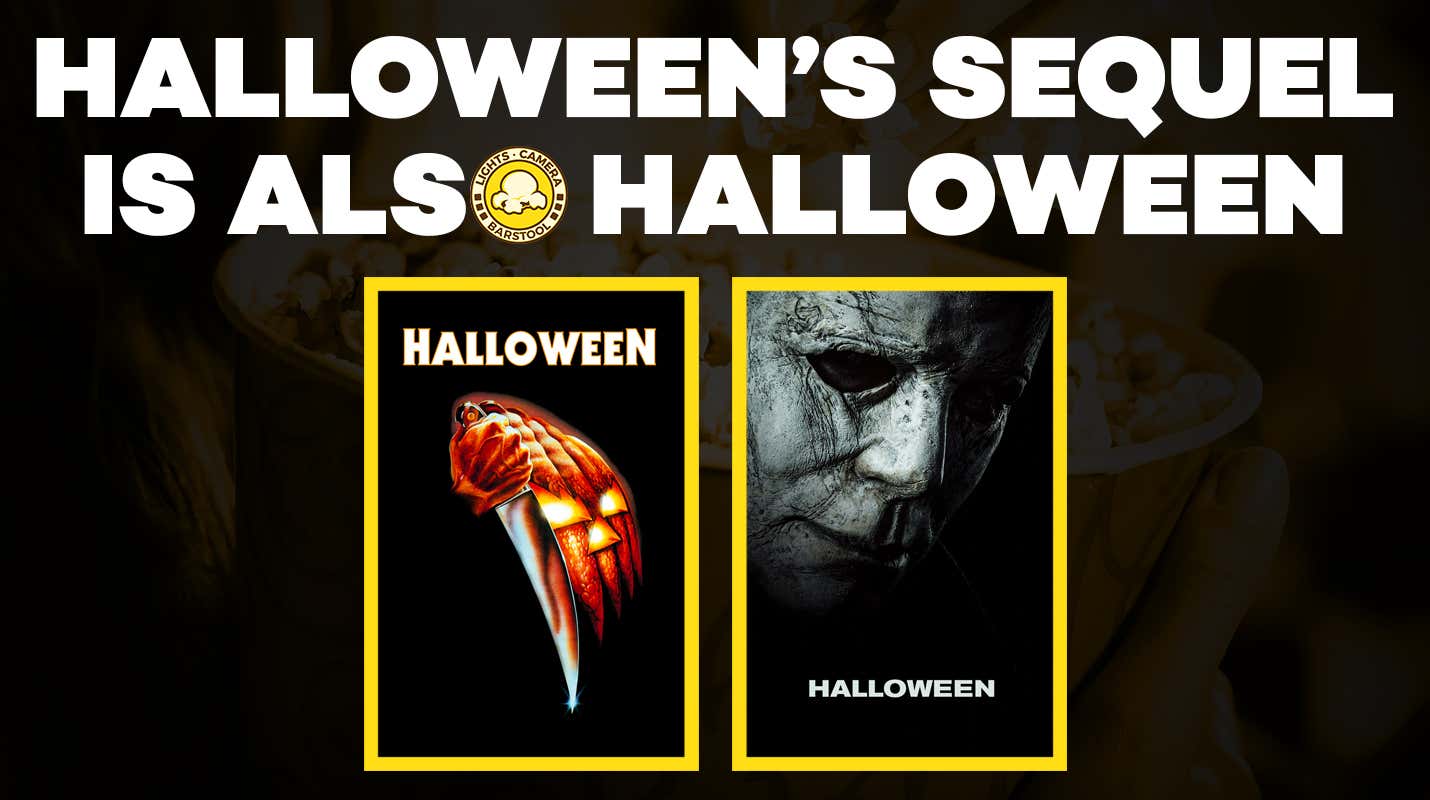 The new trailer for ‘Halloween’ was released earlier this morning. Why don’t we take a quick watch before we get into everything? (SPOILERS BELOW)

That was pretty good, honestly. Laurie’s one mission in life being her desire to kill Michael Myers is always the best subplot concept. There will be some duels in this movie and I couldn’t be more excited for that element to play out. Per usual, there will be some jump scares, which aren’t my favorite elements in a horror movie, but they are a staple of the ‘Halloween’ franchise. Overall, though, the trailer shows off some cool shots and a very tense horror movie both visually and sound wise. With Jamie Lee Curtis returning and Danny McBride writing, the hype for this movie is already pretty big.

Here’s the weird thing about the movie: ‘Halloween’ is now the direct sequel to… ‘Halloween’. Yup, that’s right, the 2018 ‘Halloween’ now officially follows up the 1978 version of ‘Halloween’. There is no “number two” attached to this new one, they just both have the same fucking name.

Every single movie after ‘Halloween’ (1978) is now considered irrelevant and is no longer recognized as canon. This is both ridiculous and, potentially, confusing, mostly because Jamie Lee Curtis’ character has been killed off two times before in different timelines. So, I decided it was a good time to look at the many different ‘Halloween’ movie timelines.

The official timeline is now ‘Halloween’ as the first movie followed up by ‘Halloween’.

I understand the issue the studio has here, as calling it ‘Halloween II’ would make the appeal of the movie a bit smaller. But at the same time, they now run into the issue of everything being confusing.

Truth be told, I really like the idea of wiping everything away and giving the movie a truly (hopefully) solid sequel. Myers being thrown into a maximum-security prison, only to escape 40 years later is pretty cool. I’ve always thought this concept made more sense than him just disappearing like a fucking ghost every year or two and then hiding away until each Halloween. This dude is a cold-blooded killer, he isn’t going to wait nearly a year between every move he makes. 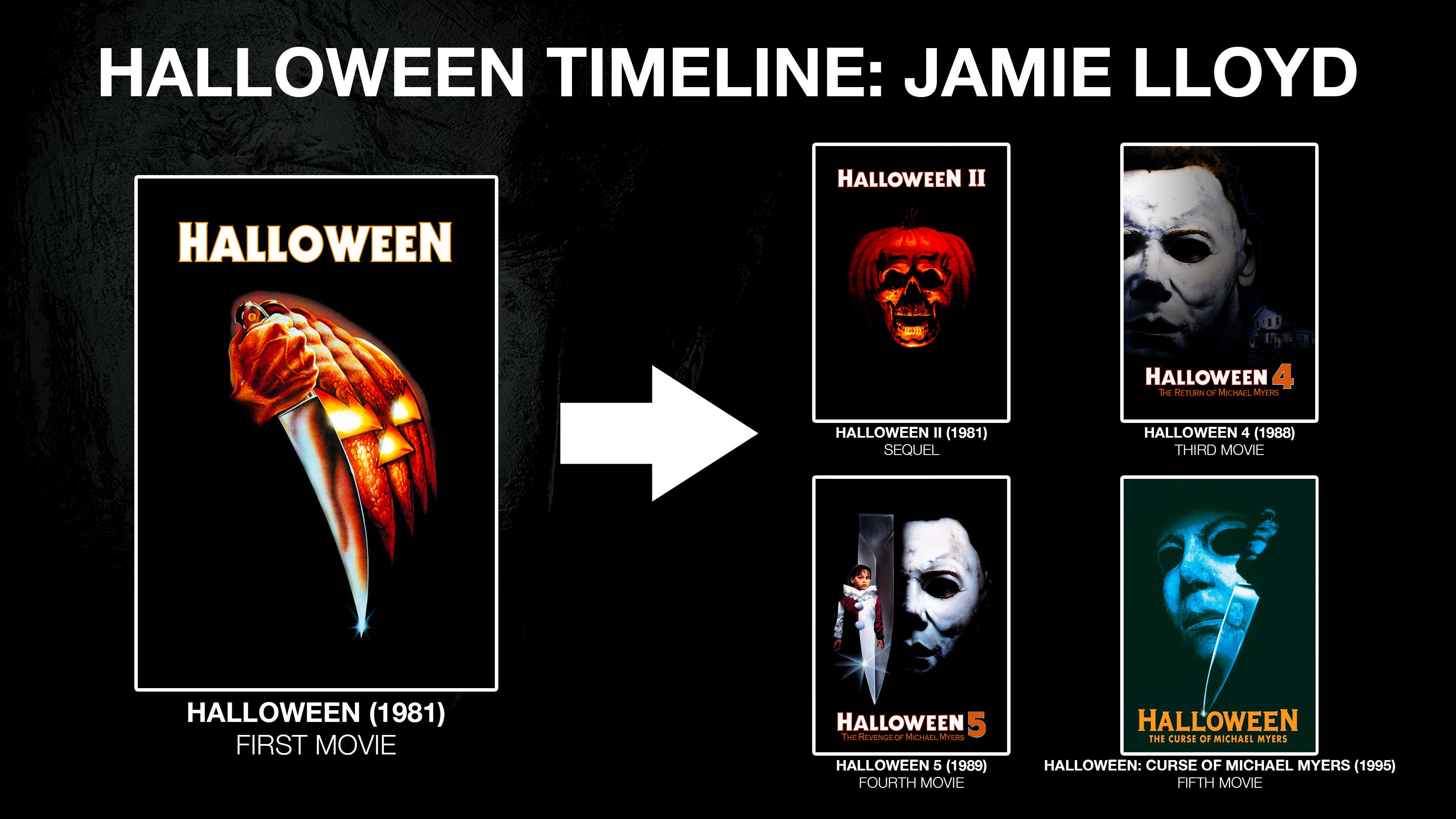 We find out that Laurie Strode is not only Michael Myers’ sister, but that she dies in between the gap of ‘Halloween II’ and ‘Halloween III’. That character introduced to take over the lead role is Jamie Lloyd, Laurie Strode’s daughter.

This timeline gets a little strange as it involves some telepathic bullshit with Jamie and Michael Myers, who is her uncle. It also features Paul Rudd…

Rudd plays Tommy Doyle, a kid Laurie used to babysit, who is on the mission to kill Myers with Jamie’s daughter, Kara Strode in ‘Halloween 6: The Curse of Michael Myers’. Like basically every movie in this franchise, we never really know what happens to Michael Myers once the final credits roll. 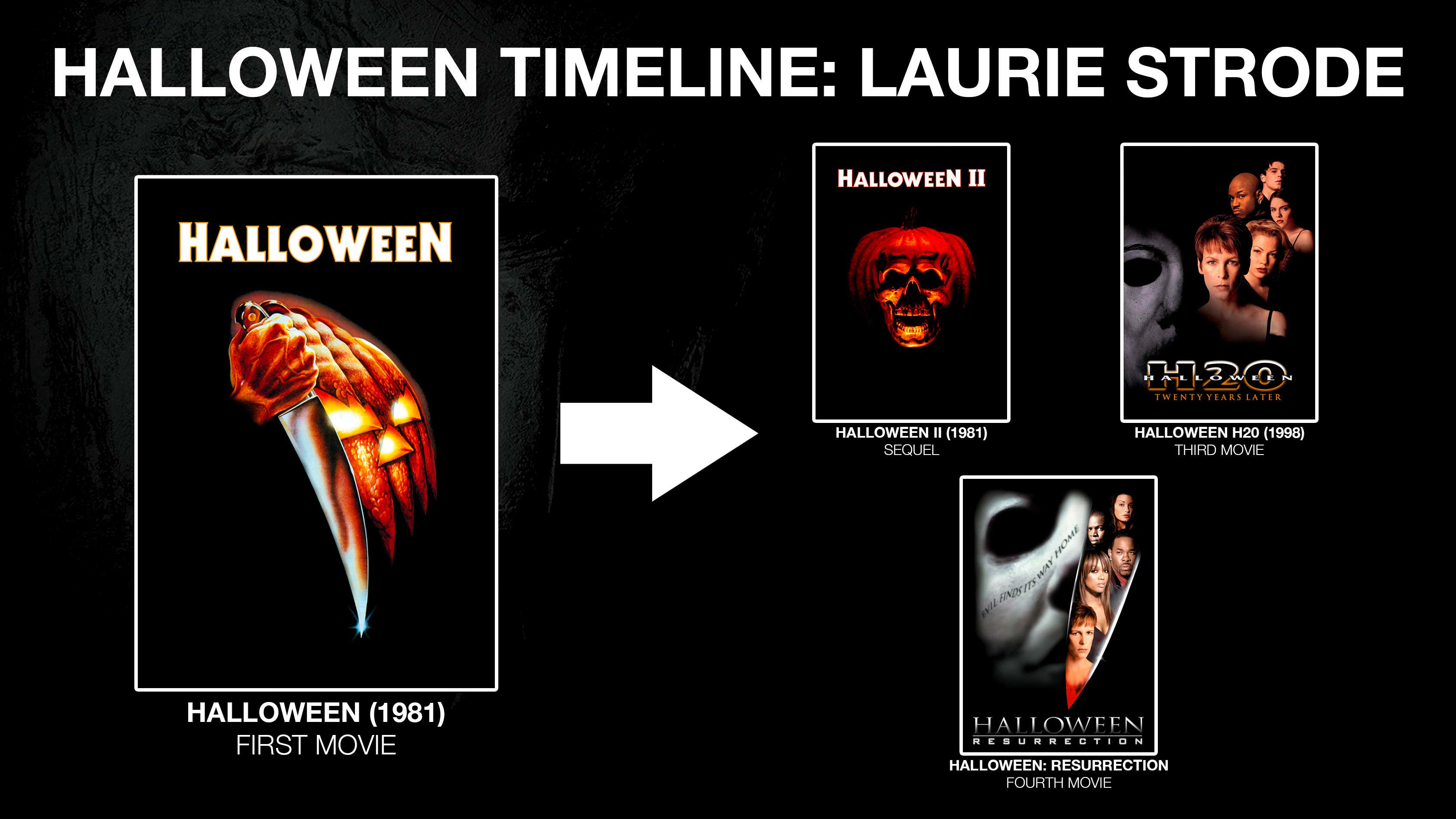 Killing off Jamie Lee Curtis’ character seems like a wild move, right? Well, the ‘Halloween’ franchise recognized this and brought her back for a different timeline, starting with ‘Halloween H20: 20 Years Later’.

In this timeline, ‘Halloween II’ still exists, but ‘Halloween 4’, ‘Halloween 5’ and ‘Halloween 6’ are all wiped away. Because of ‘Halloween 4’ being retconned, Laurie Strode is alive again after faking her death. She also moved across the country and changed her name to Keri Tate.

Set, obviously with the title, 20 years after ‘Halloween II’, ‘Halloween H20’ ends with Laurie chopping Michael Myers head off with a fucking axe.

Seems cool, right? Wrong! That was, apparently, not actually Michael Myers. Long story short, we find out in the next movie, ‘Halloween: Resurrection’, that Myers put someone else in his costume and ended up running away. Laurie goes to a sanitarium after going crazy from killing an innocent person. She runs into Myers again, attempts to kill him but is then stabbed during a moment of reflection and gets tossed off the building. Laurie is dead. Done. See you later. Myers doesn’t die in this film, as he wakes up while being examined in a morgue (of course). 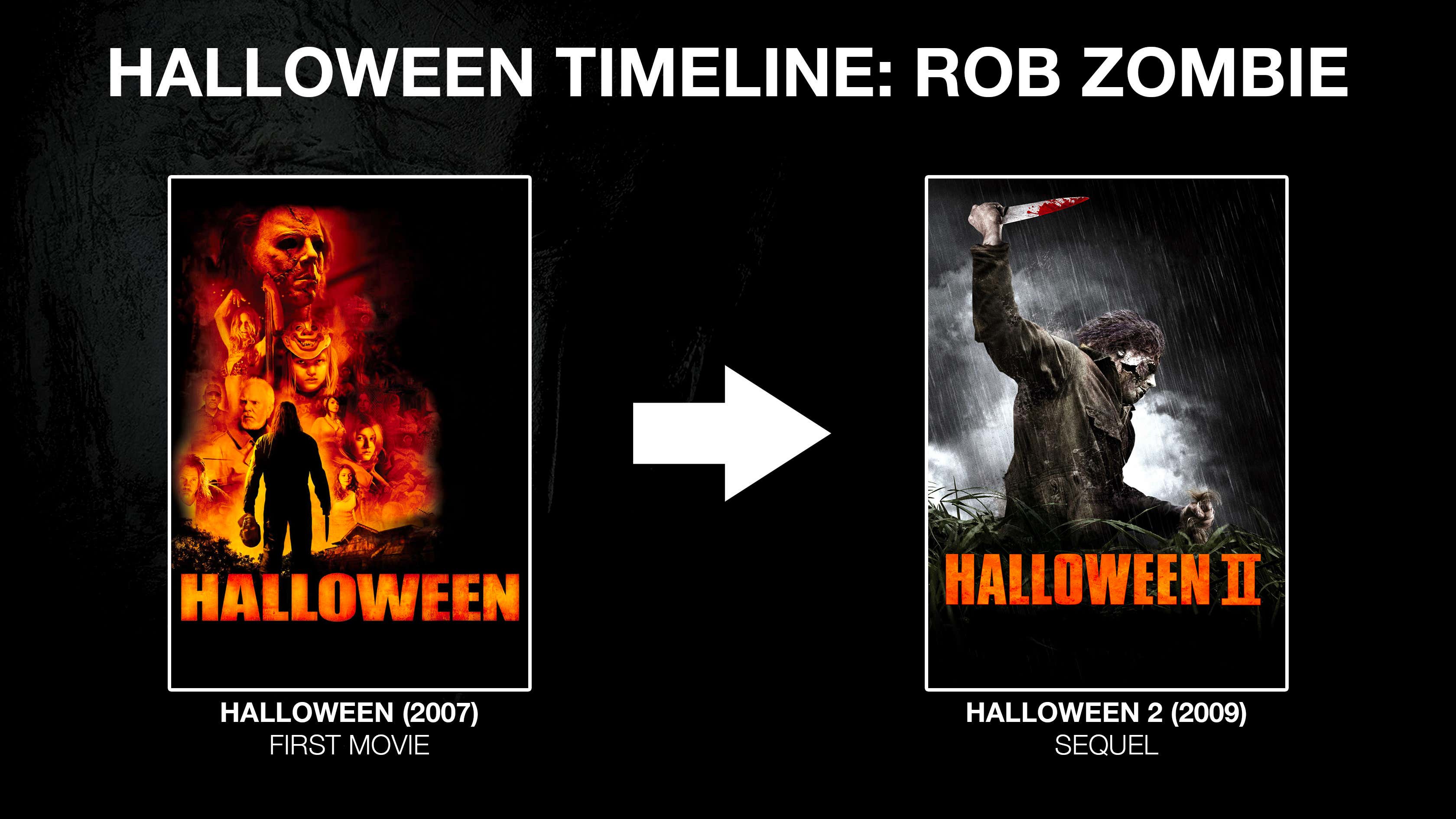 TIMELINE STATUS: IRRELEVANT IN ITS OWN SPACE

Rob Zombie decided to remake the original ‘Halloween’ and, with the advice of the original creator John Carpenter, completely rebooted everything, starting with a prequel.

I absolutely loathe these movies. Daryl Sabara, of ‘Spy Kids’ fame, gets murdered by a young Michael Myers in this movie.

Honestly, I have nothing else to say about these movies, so let’s grab a quote from ‘Halloween’ super fan Jared Carrabis. On the Rob Zombie ‘Halloween’ movies, Carrabis says, “Halloween purists didn’t like them… because they humanized Michael Myers. … I liked them. I liked finding out where [Michael Myers] came from.” The myth of Michael Myers is what intrigues the purists, Carrabis says, but that he enjoys both angles. 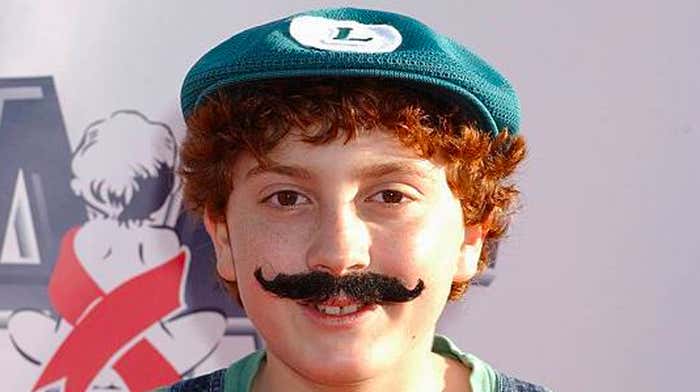 Sorry, I had to post that photo. Anyway, I might have changed my opinion on them now. Maybe I like the concept, but just don’t totally enjoy the movies as a whole. Carrabis also told me that he thinks the ‘Halloween 4’ timeline is trash and that when the weird telepathic powers and curses happen, he just asks, “what are we doing here, guys?” He only recognizes the timeline that involves Laurie Strode being alive.

These movies have literally nothing to do with the original ‘Halloween’, but, unlike the next timeline, we are going to discuss, at least they involve Michael Myers. 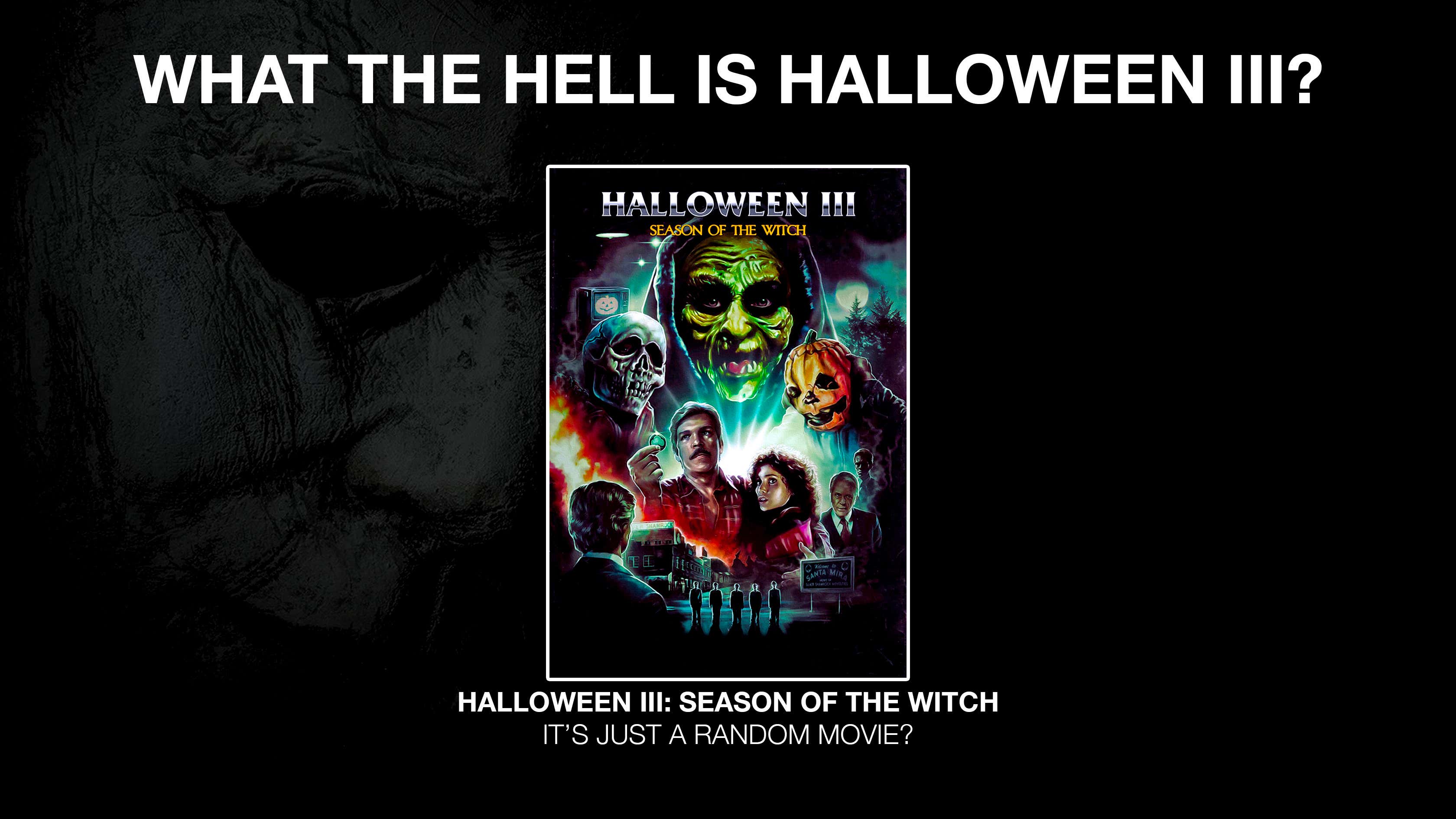 TIMELINE STATUS: THIS HAS NOTHING TO DO WITH MICHAEL MYERS

Michael Myers is not in the movie and it has absolutely nothing to do with any of the ‘Halloween’ movies. They do show an Easter egg clip from the original ‘Halloween’ in ‘Halloween III’, but that is the only reference. 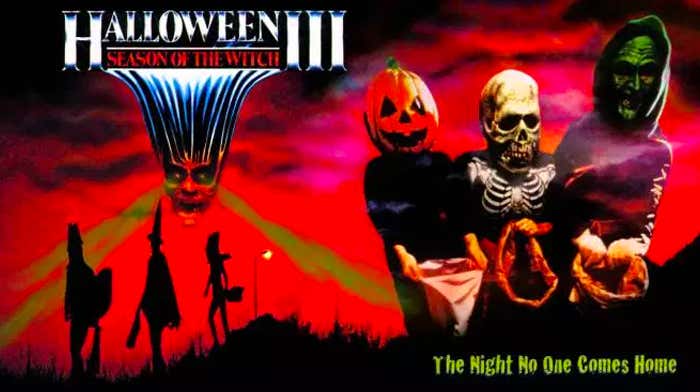 Creator John Carpenter wanted to try and create an anthology spin-off to the original ‘Halloween’ movie with ‘Halloween III: Season of the Witch’. First off, calling it the third movie is a wild move for a movie having nothing to do with the originals. Secondly, it’s easy to find the big issue with this movie as it worked away from the slasher elements and “instead featured ‘witchcraft’ theme with science fiction aspects and parallels to old Cletic fairy tales.

Ha, holy shit, that sounds awful! The movie, obviously, bombed and was poorly received. Following ‘Halloween III’, they went back to the Michael Myers theme and the rest was history.

—
Does it all make sense now? No? Okay, I figured.

The new ‘Halloween’ comes out October 19th, but the first screenings take place next week. Make sure to subscribe to Lights, Camera, Barstool and stay tuned for our ‘Halloween’ review episode with special guest Jared Carrabis.