This is like when Vin Baker became a barrista at Starbucks, resulting in one of my favorite photos on the internet: 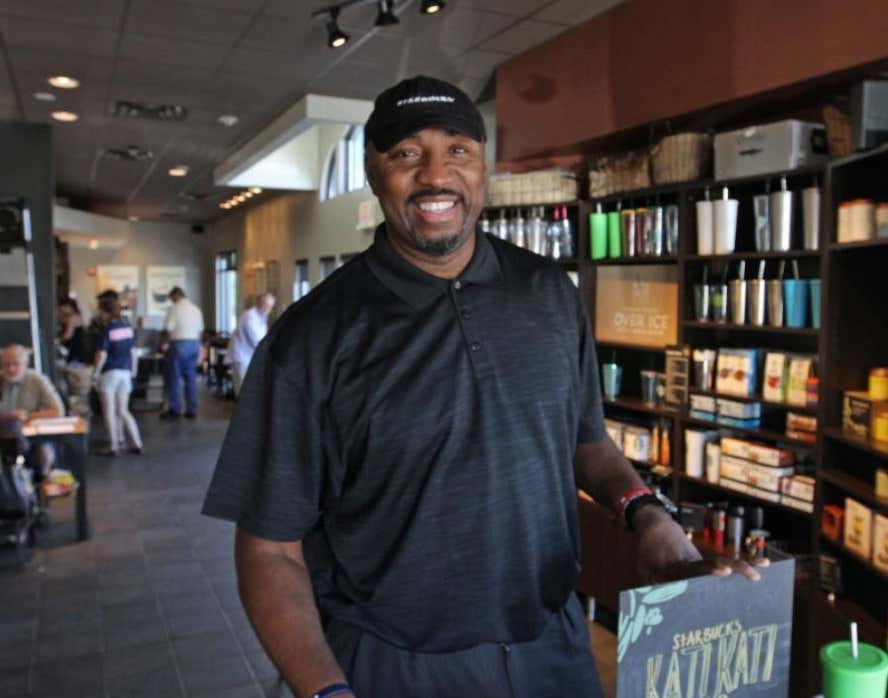 That photo makes me laugh every time. Not because I’m shaming Vin Baker for working at Starbucks, but because picturing the 6’11”, 250+ pound Baker working at Starbucks is outrageous. I loved Vin Baker when he played for the Celtics even though he didn’t do much. Sure, it made me sad that we had to lose Vitaly Potapenko for him, but great acquisitions require sacrifice. He was fucking ENORMOUS when he came to Boston, tipping the scales at over 300 pounds. Sadly, it was due to his alcohol abuse. Still, big Vin Baker fan.

On to the story at hand: Geoffrey Owens, of Cosby Show fame, was recently spotted packing grocery bags at Trader Joe’s. The internet “shamed” him for plummeting from television star to friendly grocer. He then went on Good Morning America and defended his job, saying “there’s no job better than another.”

As someone who has worked 7 jobs in 7 years, I can tell you: that’s false. Geoffrey Owens is wrong. Do not listen to him. I’ve never heard something so wrong in my life. Simply put, the vast majority of jobs suck. That’s why we have weekends and vacation days. But some jobs don’t suck. And those are usually the jobs that pay a ton of money and don’t require a lot of work. Like Michael Buffer’s “job.”

I have no problem with Geoffrey Owens working at Trader Joe’s until the next acting gig comes in; I’m just not going to hold him up as some scion of workforce humility. “There’s no shame in hard work.” Obviously. But it’s one thing to champion a bricklayer who adds shifts to support his daughter’s dream of going to college, or a single mother who takes night school classes to get a better job so she can provide a better life for her kids. Geoffrey Owens was a regular cast member on the COSBY SHOW for YEARS– the number one show on television for most of a decade. If he’s working at Trader Joe’s, it probably means he’s been spending like a maniac. But I guess those residual checks stopped rolling in once the networks pulled the Cosby Show reruns due to Bill’s rapes.

The internet responded and said that “job shaming” is a societal ill. But as some of you know, I used to work as a tutor. I would say that shame was the single biggest motivating factor behind me trying to get ahead in comedy. I watched all my friends ascend the corporate ladder, making more money each year, going on fancier vacations and earning the admiration of hot babes everywhere. The FIRST question hot babes ask you is “what do you do for work?” Being a tutor isn’t a panty-sopper (most people use panty-dropper. I prefer to sop panties, making them so wet that they fall off themselves from the weight, sliding down the leg and leaving a trail of sluggish slime.) I felt shame being a tutor, and that shame fueled me to get better at comedy so I could become famous and then sop women’s underwear like a piece of bread at the end of a bowl of mussels. So when it comes to job-shaming, I’m a huge proponent.

I’m sure Geoffrey will end up on his feet. People named Geoffrey typically do. The internet is making a big deal out of the fact that he went to Yale. Yeah, great, good degree blah blah blah. Wouldn’t see a Harvard grad working at TJ’s though. Whole Foods at worst. And we wouldn’t be flaunting it with a Harvard hat. Keep a low profile until the next million-dollar salary rolls around.

PS- never saw him on the Cosby Show but this cameo won me over. Here’s hoping he lands back on his feet, in front of a camera soon: