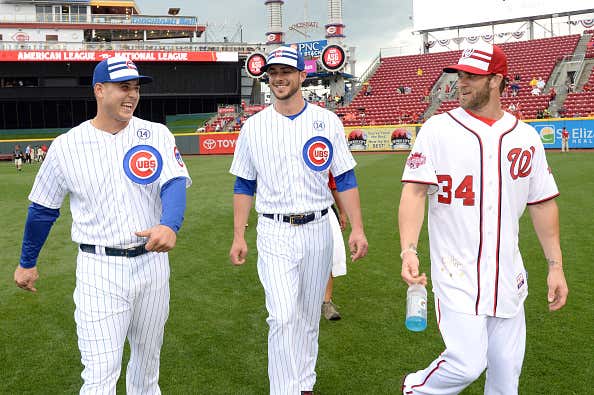 I’ve been squatting on this blog for the perfect moment. Blah blah blah. Here’s how it works courtesy of some immovable observations.

1. It’s not your money: unless you’re balling out on personal finances to the tune of being Tom Ricketts don’t @ me about the cash. If you’re prepared to make an emotional argument about the cost of doing business with Bryce Harper then also be prepared to get teabagged with cold hard logic.

2. Historical Payroll vs. Revenue: here’s that cold hard logic I was just talking about. Even if you want to say that the cost is too high and it’s absurd and will never get done. Do your homework. Think about this as a business. Have the Cubs created enough financial stability to extend payroll 12-15% to sign him? You tell me

3. There’s a $1.4 BILLION DOLLAR SURPLUS between Payroll and Revenue from 2011-2018. The last two years alone have amounted to over $500 million. Like all things with Tom Ricketts, money is not important.

4. If we agree the financials are *r e l a t i v e l y* immaterial, then we can move on to the actual structure of how this would go down.

5. The list of guys staying: Rizzo, Kris Bryant, Contreras, Baez, Schwarber. These are the core players regardless of the Bryce Harper sweepstakes. These are the known names to start the hunt. The names Theo and Jed put in front of Bryce as your core. Your boys.

6. The list of positions Theo has not solved: Centerfield

7. The list of positions currently solved but with potential room for improvement: 2B and Right Field

8. What about Jason Heyward? I love he’s stepped up to a .740 OPS this year after a .669 through his first 1,110 plate appearances with the Cubs. I love his defense. I love the camaraderie (which is a hard word to spell) and the extra inning speech and all that stuff. I do love a lot about him. But you know what I love more? Being the best. More importantly, so does Theo Epstein. He likes being the best too, and he’s looking at Bryce as an opportunity to take a big step towards being the best.

9. Can Heyward just opt out? Yes after this year but legit a real hard LOL to anyone thinking that’s a realistic possibility. He’s owed $86,000,000 over the next 4 seasons. At this point I don’t think he’d get $86,000,000 for 10 years much less 4. We’re talking about a defense-first corner outfielder here. The market value for his services is not near where it needs to be to even consider the opt out.

10. Could we get Bryce and keep Heyward? Maybe. I hope not. Heyward or Harper in center field is a legitimate disaster. Heyward would be slightly above average in center, but then that means he is * o n l y * a slightly above average player in all aspects. Like his best tool is defense in right field, so moving him to center in a musical chairs effort to get Bryce in right would just be dumb. Similarly, paying Bryce $400m+ then having him play center field would be an extremely stupid idea. I firmly think you need one or the other here, but I am willing for Theo to prove me wrong.

11. So what do I recommend? I’d sign Bryce first then worry about Heyward second. That’s fucked up, but the financial points above are made to give me cushion for this point. Sign him first then make the moves to put him on a path to right field. That path would likely involve trading Heyward to an AL team (Anaheim, Seattle, Oakland, Texas) and eating a big piece of the contract in the process. Technically, you could argue the money the Cubs eat on the deal could theoretically be applied to Harper’s compensation when considering the total cost of bringing him in. So let there be no doubt, it’s extremely fucking high. The cost is astronomical.

12. Is it worth it? This is another good question that I’m asking myself. I want to say yes. I think it’s worth it. But that’s the meatball version that just assumes a better player makes for a better team. Maybe he does, maybe he doesn’t. Idk. Personally, I think Bryce Harper is hungry AF to be considered one of the best ever. I think he wants to play for a historic franchise and go the Hall of Fame and win a bunch of world series and all that shit. I know he doesn’t love that LA lifestyle, is very close with Kris Bryant and loves Wrigley. I know that Bryce Harper has as much talent as any player in the National League. Realistically, the list of places he would go is extremely short, likely just the Yankees or the Cubs. So in a sense, I think that adds value to Harper because you’re getting the best version of him. Final verdict: yes it’s worth him.

13. What would the Cubs look like with Bryce Harper? Deadly and very slow. But mostly deadly with a Rizzo/Bryant/Harper sequence right in the middle. Whether it ultimately happens will boil down to how bad Theo wants him and how willing Theo is to give Bryce the house in the process. Knowing history, it’s probably going to happen because Theo does Theo always. Knowing the facts, it’s going to cost an astronomical amount of money and would require major reshuffling. But at the end of the day, I’m trying to be the best and win a bunch of fucking championships.