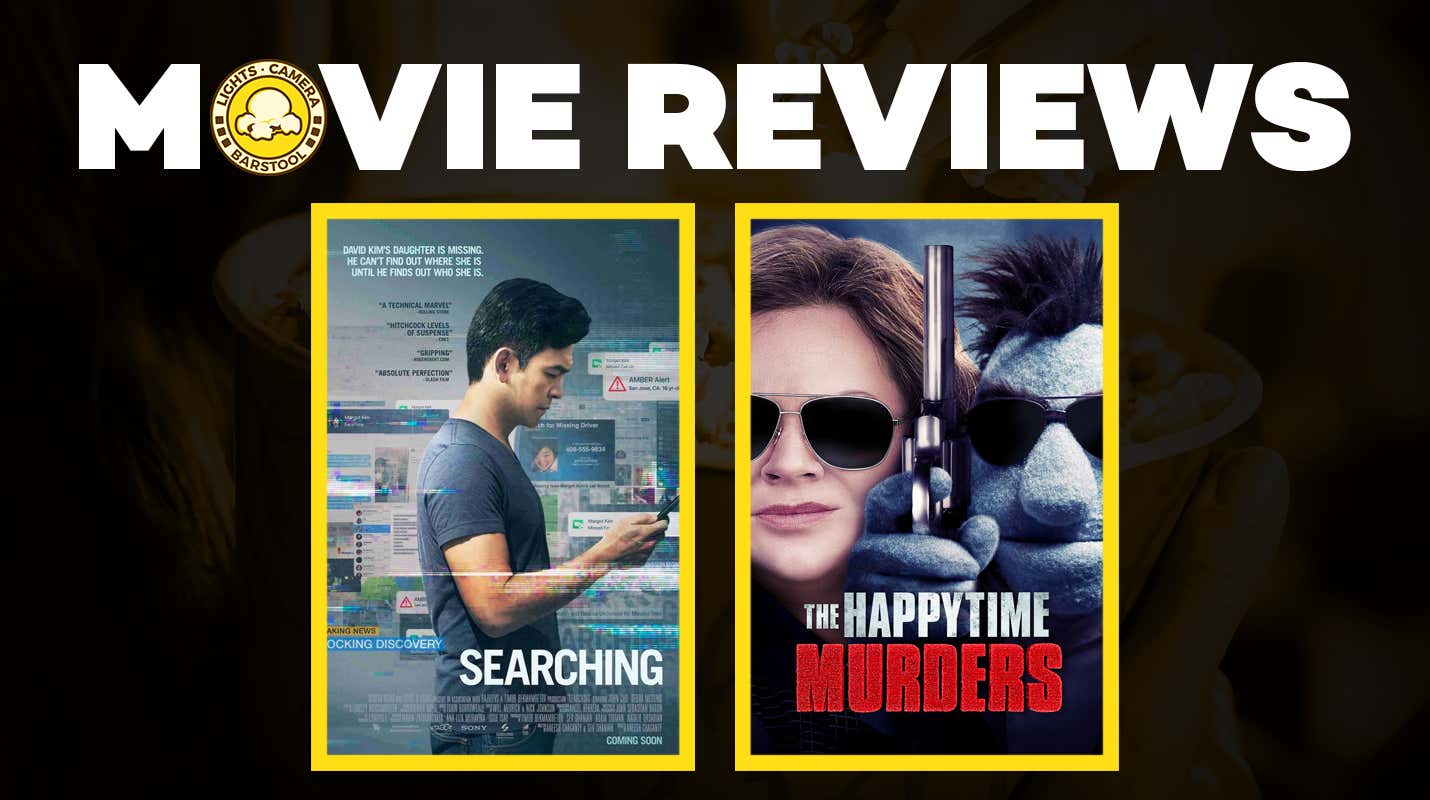 We only have two reviews this week and they were pretty polar opposite movies in terms of quality. Make sure to rate all 2018 movies in the links at the bottom of the post. Let’s get right into it… 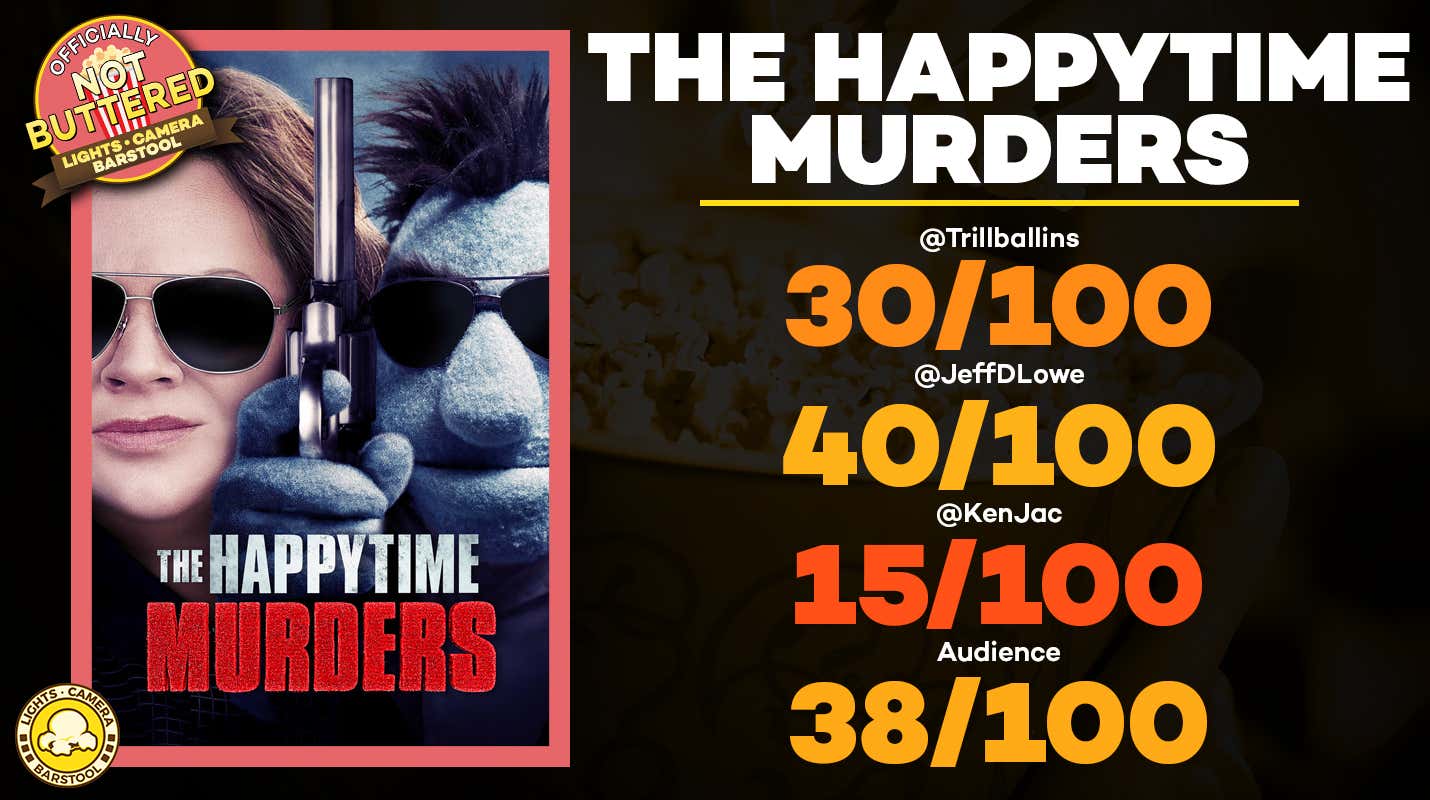 Jeff (40/100): Yeesh, what a fucking disappointment this was to see in theaters. As a big Muppets guy, my initial expectations for an R-rated Muppet movie were pretty high. Slowly but surely, I realized this had potential to be a total dud of a movie. Well, sure enough, this film didn’t bring anything to the table.

The theme of these reviews today is the idea of using an existing, but sort of untapped concept. One of them did it very well and one of them missed the mark. The negative side of this theme was from ‘The Happytime Murders’. Melissa McCarthy was okay in the lead role, I guess, and the main puppet character was serviceable. The problem, though, with ‘The Happytime Murders’ is that it relied far too much on the biggest laughs coming from the novelty of raunchy puppets.

Speaking of raunchy puppets, check out this clip of a puppeteer performing making two puppets have sex.

That’s quite the sight!

The idea of a raunchy puppet movie has been done with ‘Team America: World Police’ and ‘Meet the Feebles’, which makes it even harder for ‘The Happytime Murders’ to rely on the “holy shit, puppets having sex!” thing. Those were pretty great movies and the Broadway show ‘Avenue Q’ was also a solid production, so the potential for success did exist.

There aren’t many laughs in this movie, which is what the trailer tries to promote, and it turns into a noir mystery buddy cop story. As a whole I guess the story is fine and the chemistry between McCarthy’s character the puppet detective is “okay,” but everything around them is cliché and bland. I wouldn’t suggest seeing this movie in theaters, but some people may get some laughs out of it. Comedy is a fairly subjective genre, so you really never know with people’s varying tastes. The idea of an R-rated Muppets movie still gets me excited, I just hope someone can pull it off with a more creative script and story in the future.

KenJac (15/100): This movie felt like a bot went through every comedy made from 1999-2005 and generated a script based off of the laughing points. They present an interesting concept in an adult-audience puppet movie, but give you dated and extremely forced humor expecting laughs. It’s tiresome, especially for someone like me who hates puppet movies in general.

The main cop, Phil Phillips (Bill Barretta) is assisted by Connie Edwards (Melissa McCarthy) as they try to solve the systematic murder of a TV show cast. They weave in some humor around a very lame and unengaging plot, which is only solved when they match up the color of one of the Muppet’s pubic hair to a crime scene. Ha ha. They say, “Suck my dick!”, “Fuck Yourself!”, “Idiot says what?” and flip each other off a ton. Very funny humor in the year 2018. Maybe the only redeeming character is Joel McHale, who played a mean FBI agent. He had one scene where he tries to get Phillips and Edwards to drop their guns which were maybe the only time I laughed in the whole movie.

Unless your sense of humor stopped developing around 2004, I highly doubt you’ll get much of a kick out of this movie. Also, this duo totally rips off Orc Cop! Respect our boys in blue! 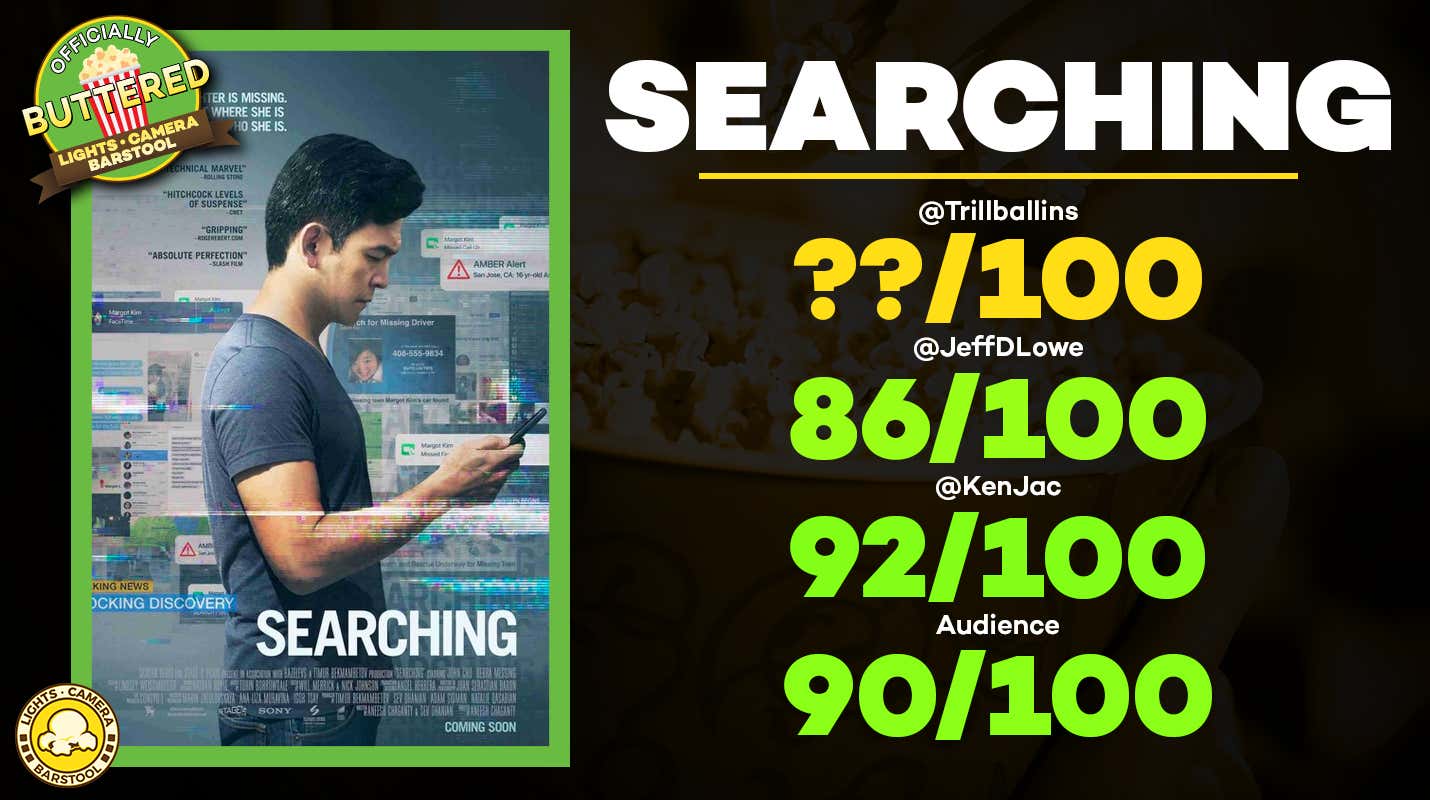 Jeff (86/100): What a pleasant surprise this movie ended up being. The concept of a movie displayed through the screen of a computer, and other devices, isn’t original, but it hasn’t really been done successfully in a widely released movie. The ‘Unfriended’ series may attract some people, but I have found them to be mostly terrible movies. With ‘Searching’ you get a great story, solid acting from John Cho and Debra Messing along with some awesome thriller twists and turns. Based around a father trying to solve the mystery of his missing daughter, with the help of a detective, ‘Searching’ will make you go “oh shit!” multiple times as the story progresses.

The idea of making a modern and relevant thriller based around 21st-century technology has always intrigued me. There must be nuance and finesse with a movie like this and an ability to not use the cool concept as just a crutch (sounds familiar, see above review of ‘The Happytime Murders’). As it turns out, first-time feature-length director Aneesh Chaganty achieved success with these elements. There seems to be a wave of first-time directors and writers in Hollywood finding success with an original movie and hot damn is it refreshing!

I can’t recommend ‘Searching’ enough, especially if you’re a fan of horror-thriller movies. The depth of the characters’ development and the unique style of the movie combine for a truly great product.

KenJac (92/100): I didn’t expect a screen-POV movie to end up being one of my favorites of the year, but here we are. It’s a brilliantly paced thriller that keeps you guessing basically every minute you’re watching. John Cho (‘Harold & Kumar Go To White Castle’) makes you feel extremely empathetic to his plight as a father, and the movie wraps up with one of the best closing 15 minutes of any movie on the year.

John Cho plays David Kim, a father struggling to connect with his daughter (Michelle La) following the loss of his wife. One night, she doesn’t return home from a study group and he reports her missing. He teams up with a Detective (Debra Messing) to try and hunt down his daughter through conventional means, social media, and news campaigns. The primary performance is from Cho, and he is incredible. You feel his pain, anxiety, and willingness to do anything to have his daughter back.

The visuals from this movie are insane, with all of it being shown from the POV of webcams, phone cameras, screen captures of email and text chains and more. The obvious comparison to make is 2014’s ‘Dark Web’, but the similarities end at the webcam POV. Writer/Director Aneesh Chaganty paces the twists and turns brilliantly, which must have been extremely difficult considering he was limited to digital screens. Also, a huge shout out to whoever was in charge of the marketing campaign. You think you might be able to telegraph what happens based off of the trailer, but you’re dead wrong. Stellar job, gents.

‘Searching’ is one of the better thrillers of the last decade, giving you anxiety, making you cry, and even making you laugh at some points. Most of all, it never feels dated. Any movie involving kids and social media can sometimes feel very “Hello, fellow kids!”, and you never really get that sense outside of the overwhelming reliance on Facebook, the medium of olds. If I could change anything about the movie, I’d guess the overwhelming majority of 16-year olds today are using Instagram, which is why it should have been the primary medium.

—
We Officially Buttered ‘Searching’ but ‘The Happytime Murders’ doesn’t come close to hitting the threshold and is Officially Not Buttered. There is a lull in releases this weekend, but then it all picks back up the week after for the remainder of 2018. Make sure to rate all 2018 movies in the links below.