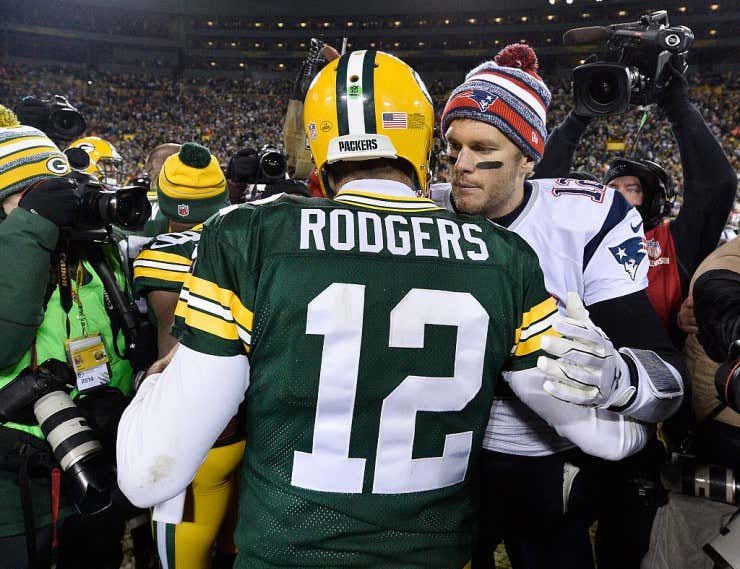 I’m happy for Aaron Rodgers. Sincerely. Like the rest of America, I am a fan. And like some of America, I’m a free market capitalist. It’s a pure good whenever a working person in any profession cashes in in big way. It benefits all of us. Because wealth is not a zero sum game where every dollar you make is one less dollar available for me. Wealth is created and there are no limits on how much can be made.

Except in the NFL. That is not a free market. It is a commune. And every dollar you make is one less dollar available for somebody else. That is just a fact. Which makes a huge deal like Rodgers’s all the more interesting. via PFT:

The base value of the deal is $176 million over six years, an average of $29.33 million at signing. The new-money average is $33.5 million. Both are all-time records.

Again, good for Rodgers. Great for Rodgers. He deserves it. He’s a special, once-in-a-generation with talent who’s entertaining as hell to watch. And I love the fact that pro football has the ability to keep a guy like that playing in a tiny suburb of a small city instead of shooting his way out of town for some huge media market like happens in other sports. But with a contract like his, there will be consequences.

In 2013, Joe Flacco won the Super Bowl MVP on the ass end of his rookie contract. He had all the leverage and created a reputation as a clutch, championship QB. He’d gambled on himself, won, and did what he should’ve done, cashed the hell in with the richest deal ever at that time, six years and $120 million. Again, good for Flacco. Great for Flacco. But since then, the Ravens have gone 40-40 with him at quarterback and gone 0-1 in the playoffs.

Which brings me back to the GOAT. Because while we all understand on an intellectual level he plays for well-below-market contracts, I still think we take it for granted just how much below market. Here is where he has ranked in terms of cap hits since the CBA went into effect in 2011:

Wait. I left out a couple of words there. When I said that’s where his cap hits have ranked, I should’ve said among quarterbacks. Not league wide, which would still be a discount of epic proportions, but just at his position.

No athlete in the history of sports has ever had more juice to go to his team and demand the biggest contract ever given out. By all rights, Brady should have a deal with Mr. Kraft that says he should automatically make more than Rodgers, in that way Red Auerbach paid Bill Russell $100,001 because Wilt Chamberlain signed for $100,000. But he doesn’t. Not even close. And don’t give me this “Yeah but his wife is a billionaire” argument because nobody ever says “that’s more money than you need” about themselves, only about other people. And I don’t play that game.

All I’m pointing out is that the GOAT’s willingness to take way less than he’s got coming to him in order to keep his team competitive should be appreciated more than it is. It’s not only practically unheard of, it’s probably the most underrated part of his legacy. In the meantime, be careful what you wish for, Green Bay.