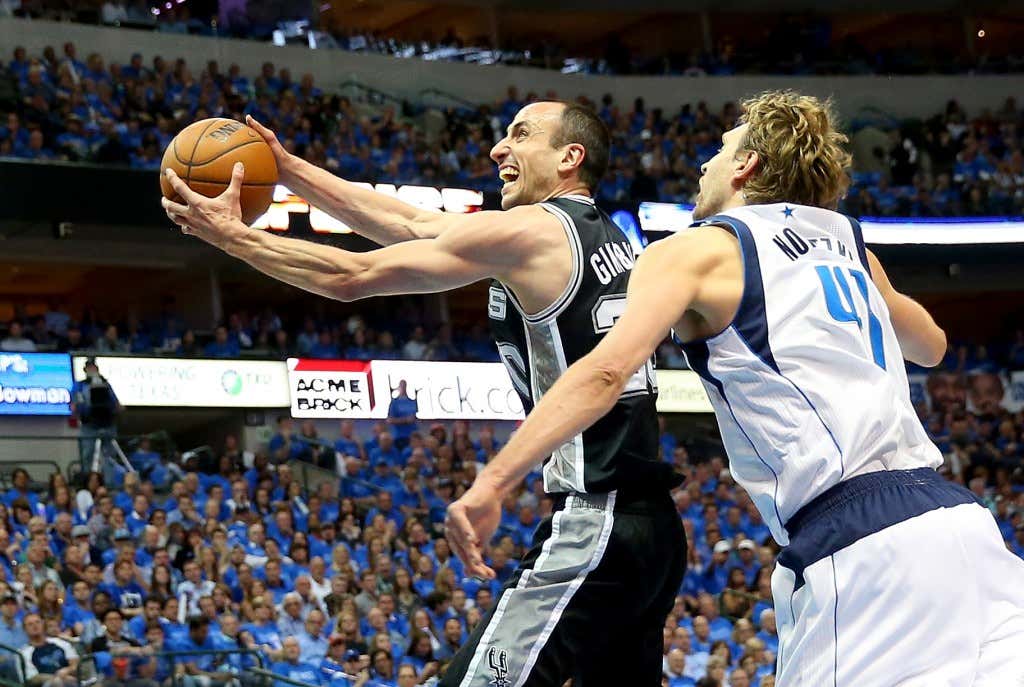 Look, my hand is up. I fully recognize what Gottlieb is doing here, I’m certainly not new to the internet and the idea of a hot take. But when I saw this tweet get RT’d onto my timeline last night, I couldn’t ignore it. And hey, he got me blogging about it so I guess it worked, but I can’t sit here and say it still doesn’t bother the shit out of me. I’m not a Mavs fan, or a Spurs fan, but as a human with a functioning brain I cannot imagine how someone could feel this way. Obviously both of these guys are locks for the Hall Of Fame (I also saw people questioning whether Manu should get in when he announced his retirement, which is utterly ridiculous. He is a HOF player. Period.) but there can’t actually be people out there that if they were tasked with starting a team from scratch and had the option of picking Manu or Dirk, that Manu is the one picked. I refuse to believe that.

Again, I understand this was a hot take to draw attention and I should have just ignored it, but I can’t and I won’t. I can’t allow people to be under the impression that Manu is a better basketball player than someone who when he finally hangs them up will widely be considered a Top 25 player. So because I’m a loser who cares way too much about this stuff, I looked into Gottlieb’s reasoning. Here is what I found

Manu is a better defender

Hmm, this is a tricky one because defense is so hard to measure. I will concede that Manu’s career Drtg of 100 is lower than Dirk’s 104. Now part of that metric accounts for the team defense as a whole, and the Spurs roster and defensive system over the years was the class of the NBA. However, when you look at Defensive Win Shares, which is the estimated amount of wins contributed to a player by his defense, Manu’s career 47.4 is much lower than Dirks 61.8. Some may say that Dirks defense was more impactful to winning.

Manu has a more diverse set of skills

I mean sure? I don’t really have any way to prove this, which is part of what makes this take so ridiculous

I’m not here to question a guy’s toughness, I’m just here to state the facts. Dirk played at least 70 games 16 times over the course of his career. Including a stretch from 1999-2009 where he did not play under 76. I’d say you have to be pretty tough to basically never miss a game. You don’t think he was banged up? Come on. Manu on the other hand is definitely a tough player, there’s no doubt about that, but he played over 70 games just 7 times. I guess it all depends on how you define toughness, but to say that Manu was clearly tougher just doesn’t pass the smell test for me.

Manu is a better passer

Manu has won everywhere he went

Does he mean SA and the National Team? Are we just going to ignore the other players for the Spurs franchise? You know, the two other HOF players he played with, and the HOF coach he had? I’d say that had a little more to do with the Spurs winning than just Manu being on the team. I find it WAY MORE IMPRESSIVE that Dirk was able to carry the Mavs to a title basically by himself. If you swap them, how different is the Spurs run and does that Mavs team win a title? This may have been the most ridiculous part of the whole take.

Aside from all this, there’s more to it

There is no debating both have had incredible HOF worthy careers. This isn’t an attempt to diminish what Manu has accomplished, but I think anyone who truly believes Manu > Dirk is forgetting what a fucking force Dirk really is. He is one of the true unicorn players in NBA history, and I’m sorry but I keep going back to the question if you were to start your team with either of these players, you go with the 7fter who opens up your entire offense, will be serviceable on defense and can take a game over all by himself.

Now as punishment for allowing this clear hot take to get me so worked up, I am going to go put myself in timeout and actually do some work today. I just had to get this off my chest, so thank you for listening.