When I first saw this story popping up I didn’t think much of it. I know big cities do huge group weddings on Valentine’s Day & stuff like that but upon looking further into it, this particular squad – the ‘Unification Church’ – had me falling into one of my usual internet rabbit holes.

When he was 16 years old Sun Myung Moon claimed he had a vision where Jesus appeared and told him to finish establishing God’s kingdom on Earth and bring peace to the world. Part of the doctrine he developed said that God’s original intent was for Jesus to ‘form a perfect marriage in order to redeem humanity, and undo the harm perpetrated by Adam and Eve’. Cue the mass nuptials like this one held at NYC’s Madison Square Garden in 1982: 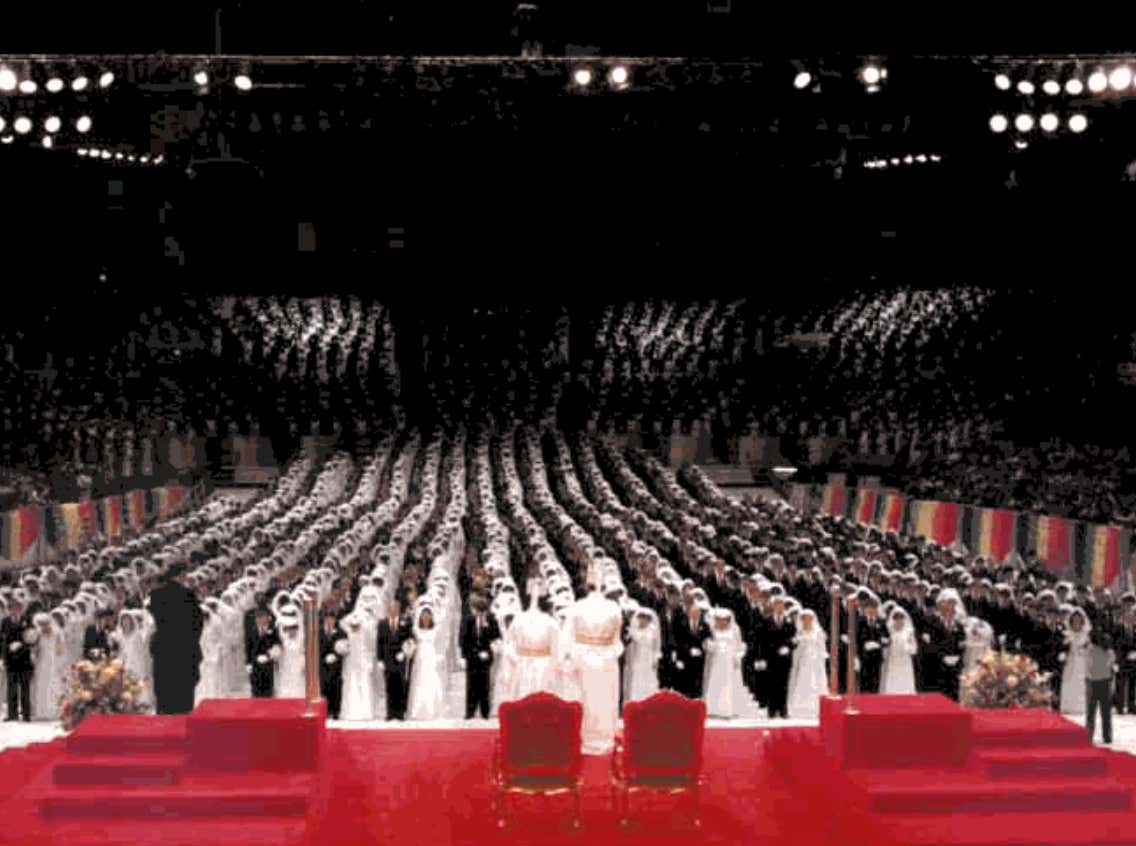 From the NZ Herald:

The church, which for years has been derided by critics as a dangerous cult which indoctrinates followers – the so-called Moonies – has held large scale weddings for decades, with self-declared messiah Moon playing matchmaker and pairing couples who had never met and sometimes did not even speak the same language.

It’s an annual event & yesterday’s wedding was held in South Korea & had about 1,000 couples from 64 different countries. Moon passed in 2012 but his wife & children have continued to grow the church. You might have heard of them from this bizarre news last year:

A Pennsylvania elementary school has informed parents it will temporarily relocate students to another school due to safety concerns on Wednesday. The move is a response to a “blessing” ceremony involving AR-15 rifles—similar to the weapon used to kill 17 people in a Florida high school on Valentine’s Day.

Wallenpaupack South Elementary School, located in the Poconos, will move its students to the school’s north campus when the controversial “Moonies” church, sometimes called a “cult,” hosts an event commonly referred to as a “mass wedding” that is expected to involve semiautomatic rifles, WFMZ-TV news reported.

The Unification Church requested that its followers bring an “AR15 semiautomatic rifle or equivalents such as an AK semiautomatic rifle” to the 10 a.m. ceremony on February 28. The event—which was arranged months earlier, Sanctuary Church Administrator Gregg Noll told the news station—comes exactly two weeks after a similar military-style rifle was used in the Marjory Stoneman Douglas High School mass shooting in Parkland, Florida.

Apparently members were asked to bring crowns & “rod of iron” (specifically AR-15s as designated by Moon’s son Hyung Jin) to the ‘blessing’. The rifles were meant to be symbols of intent and the ability to defend one’s family, community and ‘nation of Cheon Il Guk.’”

Couples unable to bring rifles for whatever reason were “invited to purchase a $700 gift certificate from a gun store, as evidence of their intent to purchase a ‘rod of iron’ in the future.”

Anyways, cute wedding. If you want to send any of the couples a gift they’re all registered at Pottery Barn and Smith & Wesson.