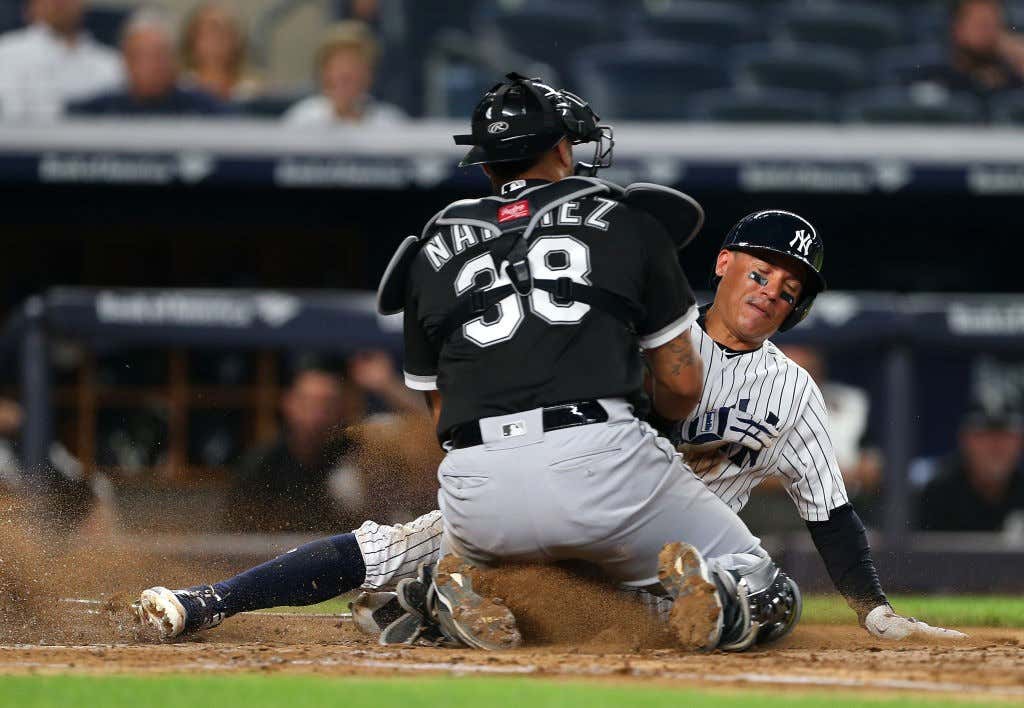 Yeah well that sucked. You can’t lose that game. All of the momentum the Yankees built after beating up on the Orioles was wasted tonight in the Bronx. In total, five infield hits by the White Sox, three errors, a run scoring on a wild pitch, and base running mistakes led to a 6-2 loss on Monday night. Before I get into the Yankees mistakes I want to give credit to Carlos Rodon who continues to pitch great over the last two months. He entered Monday with an AL-best 1.75 ERA since July 1st and kept it up, going seven strong, allowing just two runs and two hits with his only mistake being Gleyber’s two run bomb. The Yankees shot themselves in the foot in this one, but he did a great job of preventing any kind of comeback no doubt.

Although Tanaka’s stat-line will read 10 hits allowed, he pitched way better than that as five of those were infield hits. To my count he generated 19 swings and misses which tells you he was on tonight. He impressively worked out of a bases loaded nobody out jam in the 4th and held a 2-0 lead going into the 6th when two infield hits and a walk loaded the bases again. He could not houdini his way out of this one and surrendered the lead.

The Yankees best chance to come back in this game was in the bottom of the 7th after Gleyber and Walker walked back to back to start the frame as Rodon was tiring. Boone opted not to bunt the runners over here which I thought was the wrong move. If you do that you have two cracks with 2nd and 3rd and one man out for Torreyes and a pinch hitter (Gardner) for Sugar Shane. You weren’t taking the bat out of anyone’s hands besides Higashioka which I think we all would have been fine with. Instead Boone let Higgy swing away and on a 3-1 pitch he chased ball four, fouling out to the catcher (something Joey Votto has still never done in his career). Torreyes then grounded into a double play and zapped all the energy in the stadium. They were one take away from the bases loaded and nobody out or one bunt away from 2nd and 3rd and one guy out. Neither happened and proved it just wasn’t their night.

The White Sox have been on a roll lately and Rodon has been excellent since July, but you cannot lose that game and give back a game to the Sox in the standings. That sucks. That is what’s going to happen when you have three backups in there (Higgy, Shane, Torreyes) I’m not counting Voit because he’s playing like a starter at the moment. It’s deflating, but not devastating by any means. Still 35 games over .500. Go win the next two and get back in a groove, that’s all you can do.

If there was a silver lining tonight it came off the bat of Gary Sanchez in Scranton when he homered in his first at bat. He later hit a laser single to give him two knocks on the night.

He caught seven innings as well and from all accounts came out of the game feeling good. Hopefully he can get back a week from today as the team heads to Oakland to start their big west coast road trip.