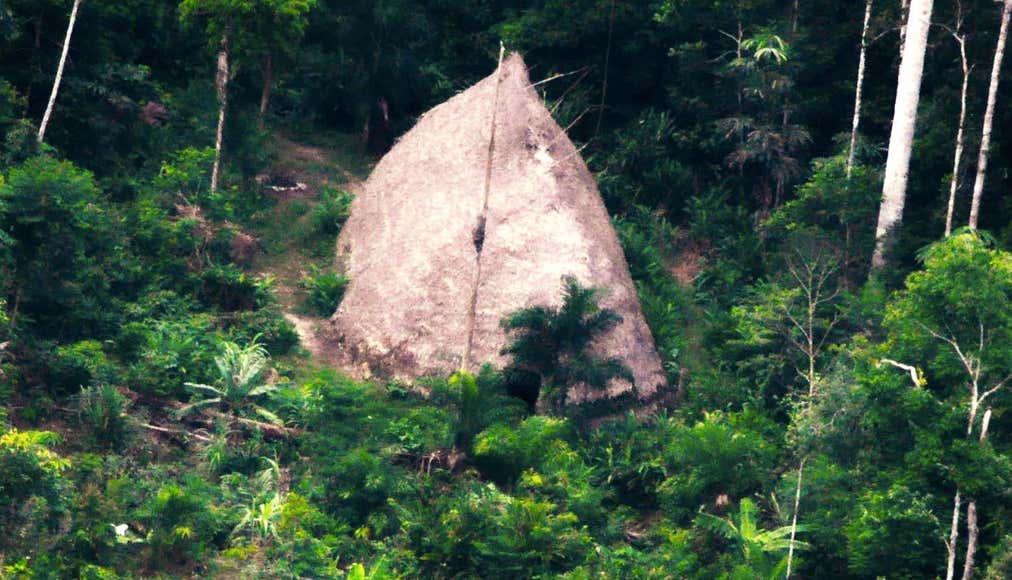 Smithsonian – In 2017, Brazilian officials embarked on a long journey into the depths of the Amazon forest to monitor the isolated territories of the country’s indigenous tribes. Now, the team is revealing details about the expedition,including the first images of a group that has had no known contact with the outside world, reports Richard Pérez-Peña of the New York Times.

The expedition was undertaken by Brazil’s National Indian Foundation, or Funai, which works to protect the rights of indigenous groups. Among the images that the organization released is drone footage showing a clearing in the Javari Valley, a large indigenous reserve. In the clip, people can be seen walking through the clearing, including one person who seems to by carrying a pole or a spear. They do not seem to notice the drone hovering high above the trees.

To think that down in Brazil, there are multiple tribes of indigenous people with absolutely zero connection to the civilized world that surrounds the giant rainforest they call home is borderline inconceivable. I’m sure in their little world they’ve created for themselves there are a ton of positives that none of us could even comprehend; the feeling of putting a spear through the lungs of some big game to feed your family or the first time you do sex with your wife that was given to you as a prize by a village elder after you kill a jaguar and become a man. All of that shit sounds great, but I’m having a hard time believing that choosing to live this lifestyle isn’t ultimately just a case of these indigenous people not knowing what they’re missing.

The question then becomes, what would it take to show these literal savages that everything they’re missing by living a life of exclusion is worth taking a journey out of the rainforest and joining modern society?

If I’m putting together a care package for these tribesmen with the intent of making them realize it’s time to grow up and join the real world, what should it include?

Next, they’re getting all the best fast food the planet has to offer. Double quarter pounders with cheese and endless french fries from McDonalds, crunchwrap supremes from Taco Bell with a couple hundred gallons of Baja Blast Mountain Dew, maybe even some Chick-Fil-A. I’m not trying to turn this into an argument about what the best fast food in the world is, but if you think these guys living off roots and charred caiman meat are gonna eat a bunch of burgers and fries from McDonalds and not at least consider leaving the dirty and moist Brazilian rainforest in search of some more, you’re probably high or a vegetarian.

Aside from pornographic magazines and some of the greasiest and most delicious food society has to offer, I bet these guys would literally kill each other to get their hands on some quality shoes. Hit ‘em with a nice selection of regionally appropriate footwear and I almost guarantee it’d be curtains for the jungle life. Imagine these guys running through the jungle with a spear in hand, stomping through the mud in a fresh pair of Timberland boots, or even a pair of camouflage Crocs? The level of comfort alone would leave them with a feeling like nothing they’ve ever felt before. It’d be like air dropping in a bunch of heroin and clean needles; all it’d take is time before they emerge from the rainforest in search of a fix, trying to capture that initial feeling once again.

I suppose it’s wrong of me to assume that these guys don’t absolutely love the life they live and would want nothing to do with any of modern societies most sought after and beloved commodities, but it’s 2018 and I don’t really care. They should at least get to decide for themselves.

If anyone reading this works for the Funai organization in Brazil, slide in the DMs and let’s work this out. I’m just trying to help them live their best lives. If that’s wrong, I don’t wanna be right.