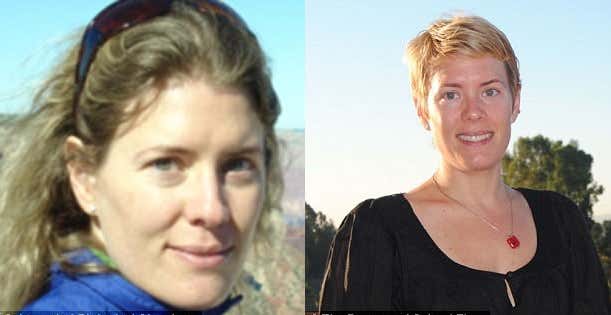 Almost exactly a year ago, I brought you the Sex Scandal Teacher story of Aimee Palmitessa, a teacher at the elite Brentwood School in Beverly Hills, a school that has graduated the kids of Arnold Schwarzenegger, Harrison Ford, Reese Witherspoon and Adam Levine, as well as Jonah Hill and Ben Savage. Given that Brentwood’s clientele were the most interesting part of this Scandal when it broke 56 weeks ago, I didn’t think much of it:

Moral Compass/Bad Judgment: Obviously the details are really lacking in this one. All we’ve got is an arrest, an obscene amount of bail and PTA meetings that must look like the Dorothy Chandler Pavilion on Oscar Night. I just hope the student she boned is some kid on an academic scholarship. I might be a free market guy, but I can root for the underdog.
Grade: C- …

Overall: B. But let’s face it, this grade is totally built on her looks and the A-list school. She is a total candidate for a re-grade if we get more details. Be better, Brentwood.

Well we have more details. And Brentwood did do better. A lot, lot better. Or worse, depending on which side of the lawsuit you’re on.

An anonymous reader sent me the court filings by the attorneys for the student “John Doe,” who are suing the school. And they are not just explosive, they are goddamned thermonuclear. I don’t have a link to the 34-page .PDF document, I’ll just have to comb through it and pull the highlights for you:

–The 17-year-old kid was at a party where students were disciplined by the school for singing a rap song with the “N-word” in it that somebody Snapchatted. He claimed he was not one of the kids singing, and Palmitessa went to bat for him in front of the disciplinary board.

–She later saw him walking across the quad, called out to him, caught up to him and held his hand for 30 seconds in front of dozens of students and faculty. Until the kid got embarrassed and pulled his hand away.

–Confused, the kid went to a school counselor, Robert Jost, telling him he was in love with an older woman he saw every day and admitted she was a teacher. “Remarkably, Mr. Jost counseled John Doe by encouraging the relationship,” by citing the example of French President Emmanuel Macron whose wife, Brigitte, is 24 years older than him and his former drama teacher. So the student read up on the two and “Mr. Jost’s advice indelibly changed the course of John Doe’s life.”

–Palmitessa and the kid started exchanging texts and Snaps that became more flirty. She also introduced him to her 5-year-old daughter and asked him to escort the girl to some school event. The lawsuit calls that “grooming” him.

–Under the section “Dr. Palmitessa’s Sexual Conquest Begins,” it mentions “an unceasing sexual obsession,” including “vaginal sexual intercourse in the storage/lab room in between science classrooma, oral sex and digital penetration in the storage/lab room and her own office, vaginal intercourse in John Doe’s car” in the parking lot and the home she lived in with her boyfriend and daughter. Over the summer of 2017 “she spent entire days and nights having sex with John Doe at his home while his parents were out of town.” They also did it at her house in the bed she shared with her boyfriend and her 5-year-old’s bed. They later did it an an intersection in Brentwood. Then at a hotel, with his father dropping him off.

–Another quote: “She guided him how to engage in ‘rough sex’ – choking, beating and spanking her while he anally penetrated her. She left hickies and bite marks all over John Doe’s body. John Doe acquiesced to Dr. Palmitessa’s demands in order to please her. She sent him pictures of her bruises after the encounter, they made him feel horrible, but she told him not to worry because ‘that’s how she liked it.'”

–John Doe told Aimee he was worried their relationship was “not normal.” So she did what I guess any normal sexually deviant 45-year-old would do with her high school sidepiece. She made up a ceremony where they pretended to get married and then proceeded to bang him all over his parents house. Even sneaking past the live-in housekeeper and the crew doing work on the place.

–She took John Doe to see Kendrick Lamar at the Staples Center, drove him home, banged him several times, took a naked selfie with him. Then went home to her family within hours of his parents coming home. Not long after that, she was arrested.

And so there you have it. In all likelihood, the greatest update in the history of Grading the Newest Sex Scandal Teacher. I wanted to root for the underdog? Well Dr. Aimee Palmitessa is the ultimate underdog, going from getting ripped by me for not doing much in terms of her Moral Compass to having science lab sex, office sex, sex in both houses, edible pot and butthole play on a scale never before seen in the glorious history of GtNSST. And the Bad Judgment grade that can only come from introducing your teenage boyfriend to your preschooler and then banging him in her bed. That is a Hall of Fame level resume from what was an ordinary, long forgotten, run-of-the-mill teacher. Hers is a comback story for the ages. A Worst-to-First. She is the ’69 Mets, the ’91 Twins, the ’99 Rams and the ’08 Celtics all rolled into one fairly attractive, mentally damaged package. So never give up on your dreams, teachers. The good doctor, with a huge assist from school counselor Jost, proves is always the chance to redeem … make that, demean … yourself.