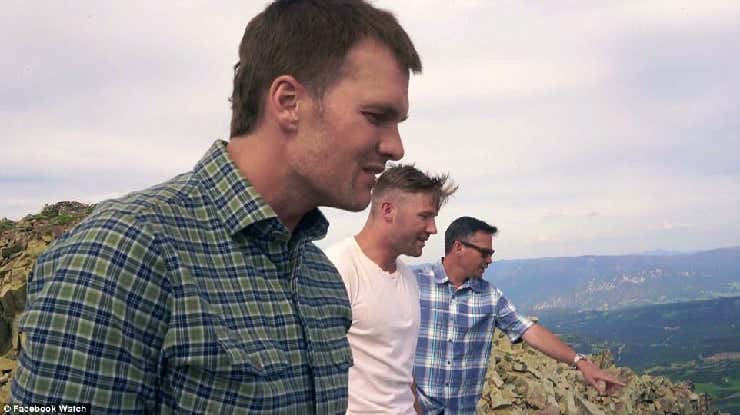 Brady was asked about Guerrero flying with the team, and he confirmed it did in fact happen.

The quarterback was then asked a few follow-ups on the subject, which led to him ultimately hanging up and ending the interview.

Here’s how the exchange went.

Kirk Minihane: What changed in him not being on the team plane last year and this year? Was that just communication back and forth, or was that an understanding of other things? What led that to being able to happen this year?

Brady: “Yeah, I am not getting into all that.”

Minihane: OK, when I ran into him at the Super Bowl last year in Minneapolis, I remember talking to him at the time — when I talked to him there, he had said in his opinion that all this stuff had been overblown, and he and [Bill] Belichick had a pretty good relationship even then. Would you say that is true?

Brady: “I said I don’t want to get into it. … Everyone knows, it is well-documented the work he and I do together.”

Minihane: “I understand that. I am just trying to figure out because I saw the reports this weekend that he’s traveling with the team. Was he on the sideline Friday?”

If you’re scoring along at home, this makes two Q&As Tom Brady has dropped the mic over an Alex Guerrero-related question in the past month:

And the second time in his last four regularly scheduled, contractually obligated WEEI interviews that he hung up on them. The other being the time last January one of the fill in hosts called his daughter “an annoying little pissant.”

Add them all together and the only conclusion you can draw is that the GOAT is sick and goddamned tired of having everything he does off the field – from his private life to his relationships to his side businesses  – ripped apart by the media. He sounds as though years of talk about air pressure and MAGA hats and him stealing money from Best Buddies and how TB12 Fitness is a weirdo cult has him mad as hell and he’s not gonna take it any more. That things have changed since that “What’s up with our hero?” press conference back in 2015 and he’s done with suffering that nonsense gladly. And when pushed, he’ll do the polite, Zen, Four Agreements version of telling the interviewer he can go fuck an electrical outlet.

Because he doesn’t need to play nice anymore. Despite having the kind of success that gives him the power to treat everyone around him like hot garbage, he’s been unfailingly nice to everyone for almost 20 years. But the kindness was taken as weakness. And so all he’s gotten is more grief. It seems like his reservoir of patience has been drained down to nothing. You might get one “I’m not going to get into it.” Possibly two if he’s really in a good mood. But on the third strike you’ll get a dial tone. Good for Brady for finally getting off that dreaded High Road and finally taking the easier, faster and much more enjoyable Low Road like Pats fans have always wanted. He’s finally learning from his head coach how to diffuse a controversy by not giving the press anything.

P.S. I’m not going to tell WEEI hosts how to do their jobs. Everyone’s style is different and you just do you. But I can promise you right now in the offices at the station, management is shitting kittens at the thought Brady might just pull the plug on this appearance altogether. It’s going to be a long week around there.