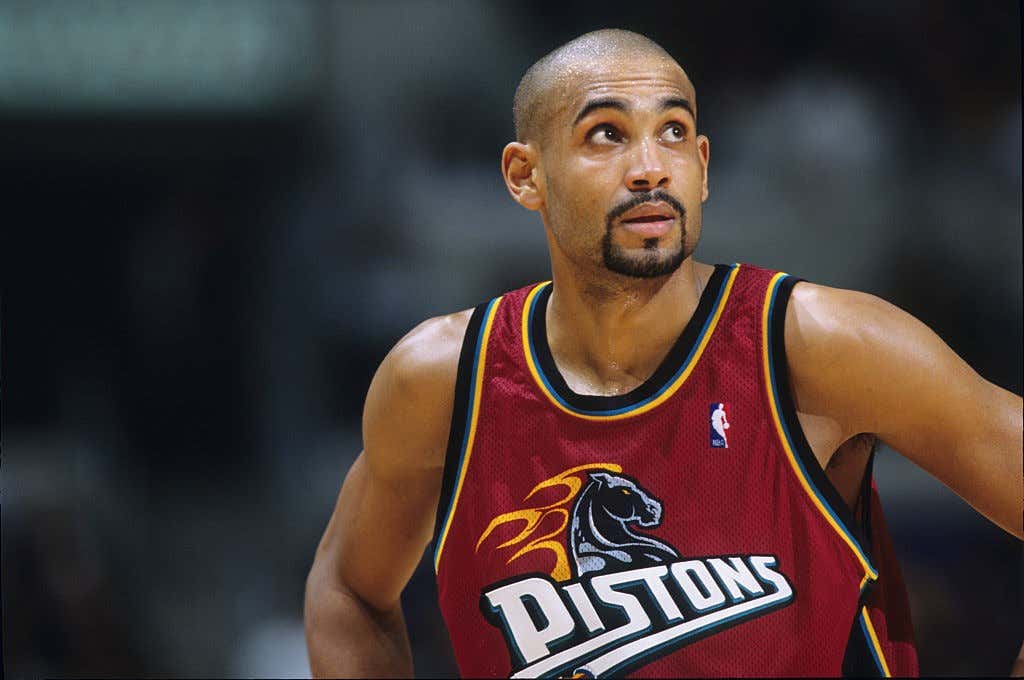 Good morning everybody, happy Monday! I hope you all had a wonderful weekend, and while it sucks that we’re all back in the cubes today, I figured it would make it a little easier if we started our day celebrating one of the best players I ever saw play the game growing up. A player who’s NBA story reads like a Greek tragedy. It all started when last week I saw this throwback video on Twitter and immediately I knew he was going to be our subject of today’s blog. That’s right, today we look back on maybe one of the biggest “what if” players in NBA history.

When it was all said and done Grant Hill played a total of 18 seasons in the NBA. At the same time, his career was not exactly the same sort of fairy tale story we get with other guys who have played that long Dirk, Duncan, Kobe, Ginobli etc. When Hill burst onto the scene in 1994 with the Pistons, he was an instant stud. Immediately named a starter Hill put up 19.9/6.4/5.0/1.8 on 47% shooting as a rookie and never really looked back. It may seem weird to hear because there are a lot more Grant Hill type players in today’s NBA, but back then, Hill was a true video game player. You could argue one of the first of his kind, the league really hadn’t seen anything like him at SF position. He made the All Star team his rookie year, and every year as a Piston after that minus that lockout year in 1998-99 (he made it the next to years). During the 1999 season is wher ehe truly broke out, averaging 25.8/6.6/5.2/1.4 on 48/34% splits. The problem was, as good as Hill may have been, the Pistons as a team never really made any legit waves in then postseason. They either missed the playoffs or lost in the first round during his entire Pistons tenure. Then, in the 2000 season right before the playoffs, it happened. Hill fucked up his ankle a week before the playoffs started, and from then on his career took a brutal turn.

That next summer in a sign and trade he was shipped to Orlando where the plan was to pair Hill up with another budding superstar in Tracy McGrady. But as Magic fans will tell you this did not exactly go as planned. In Year 1 in ORL Hill played just 4 games, then in Year 2 that became 14 games, then in Year 3 just 29. Things got worse as he then missed all of the 2003-04 season. When Hill came back in 2004, he was able to play 67 games and looked like himself, averaging 19.7 points on 50% shooting. He even made the All Star team at age 32. But then the next year, right back to played just 21 games. When it was all said and done, Hill would play a total of just 200 game in his 6 seasons in Orlando, robbing us of what might have been an all time pairing between him and McGrady. Devastating stuff for anyone who enjoys the game of basketball during that time.

From there Hill went on to make his way to PHX, and that magical training staff did wonders. Starting in the 2007-08 season all the way until 2011-12, here were Hill’s games played: 70, 82, 81, 80, 49. Pretty insane that he could stay on the court like that in his mid 30s and yet couldn’t in his late 20s early 30s. That’s some fucked up shit if you ask me. That year he played 82 games was the first time that happened in his ENTIRE career, and it was also while in PHX that Hill finally got to experience what winning a playoff series was like. He became one of seven players ALL TIME to average 13 or more points at age 38 or older. While he never won a ring, that time in PHX was a nice way to end his career (I don’t count LAC, he played 29 games)

When it was all said and done, Hill was a 7x All Star, 1 All NBA First Team member, 4x All NBA Second Team Member, NBA Co-Rookie Of The Year, and this past March we learned he will forever be enshrined into the NBA Hall Of Fame. Think about that, a guy who we lost a majority of him prime STILL made the Hall Of Fame. That should give you an idea just how ridiculous Hill was.

If you still don’t believe me just see for yourself.

Have a great Monday everybody!