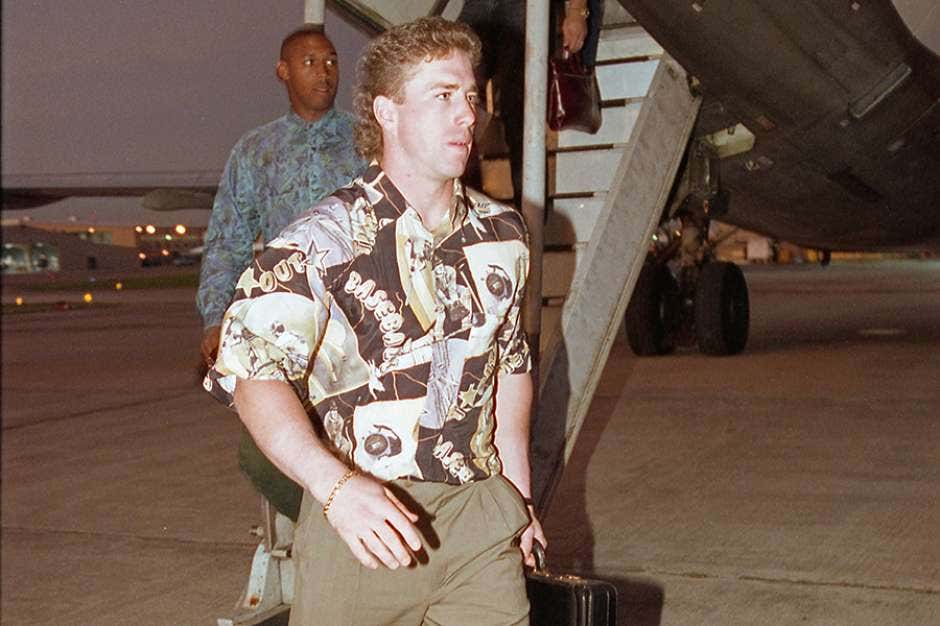 There is no place like dome after the Houston Astros play their first game at home after a record 26-game road trip. The Astros were forced on the road by the Republican National Convention, which was held at the Astrodome. The Astros had a respectable record of 12-14 but suffered a 5-3 loss to the St. Louis Cardinals in 13 innings on their return.

The Astros road trip was set up, two years earlier when the city of Houston reached a deal to host the Republican Convention with President George H.W. Bush looking to be re-elected for a second term. As the 1990’s began, the Astros were a team in transition, as their owner John McMullen had lost interest in the team and put them up for sale. McMullen, a resident of New Jersey who also owned the New Jersey Devils in the NHL had become upset with the rising salaries in baseball and was looking to get out.

The Astros had hit rock bottom in 1991, finishing with the worst record in baseball at 65-97. While things seemed bleak at the time, but a core of young stars was coming up, led by Jeff Bagwell, Craig Biggio, Ken Caminiti and Steve Finley. The young Astros were unhappy with their long trip and tried to file a grievance through the union. However, due to security needs the Astrodome had to be cleared several weeks before the four-day convention, especially with a sitting president.

The Houston Astros odyssey began on July 27th, with a three-game series against the first place Atlanta Braves at Fulton County Stadium. At the start of the trip, the Astros managed by Art Howe were in fifth place with a record of 44-54. The Astros won the first game of the trip 5-1 in 11 innings on a grand slam home run by Eric Anthony. A day later, the Astros beat the Braves again 7-5, led by four-hit game by Ed Taubensee. The Braves would win the final game of the series 5-3, with the Astros satisfied with a series win.

After a day off the Astros began a four-game weekend wraparound series against the Cincinnati Reds at Riverfront Stadium with a 6-1 loss on July 31st. August had an inauspicious start, as Houston suffered an ugly 9-0 loss. The Astros would rebound to win the next day 5-4, but left Cincinnati, losing three of four in the series, as they were blanked 4-0 in the finale.

From the Queen City, it was off to Hollywood, as the Astros began a nine-game trip through California. The Astros were already showing signs of being road weary as they suffered a 7-2 loss to the Los Angeles Dodgers, committing three errors along the way. Facing another loss at Chavez Ravine, the Astros scored two runs off Dodgers closer Roger McDowell in the ninth inning to stage a 7-6 comeback win. It was the Astros young core that led the rally, as Steve Finley led off the inning with a single. Finley later scored on a double by Ken Caminiti, while Jeff Bagwell drove home the winning run.

After splitting a pair with the Dodgers, the Houston Astros went south to face the San Diego Padres at Jack Murphy Stadium for a four-game series. The opener was all San Diego, as the Padres jumped all over starter Brian Williams and won the game 7-5. Houston’s road woes continued the following day as they lost 4-2, as they were handcuffed by former Astros hurler Jim Deshaies. The Padres continued to have their way with Houston in the series’ third game, winning 7-5 powered by the bat of Gary Sheffield. The Padres would go on to complete the four-game sweep with a 4-3 win as Larry Andersen, another former Houston hurler got the win in relief.

After getting swept in San Diego, the Astros headed to Candlestick Park for a series against the struggling San Francisco Giants, who at the time appeared to be ready to move to Tampa Bay. In the opener, the bat of Will Clark and the arm of John Burkett teamed to take down the Astros 4-1. The Astros would bounce back to win the following day 6-3 with a Jeff Bagwell breaking the game open with a two-run pinch single in the eighth. Bagwell provided a big hit the following game, singling home Steve Finley with the winning run in a 5-4 ten-inning victory.

After taking two of three in San Francisco, the Astros were staying at Clark and Addison for a four-game set with the Chicago Cubs at Wrigley Field. The opener saw Jimmy Jones match Cubs starter Frank Castillo for six scoreless innings. In the seventh, the Astros broke through scoring four runs as they won the game 4-3. After the Cubs won on Friday, 4-2 the Astros got a complete game shutout from Butch Henry to win 5-0 as they looked to take the series with a win on Sunday. Unfortunately, Greg Maddux on the way to winning his first Cy Young outdueled Brian Williams 1-0.

With a day off after 17 straight games, the Astros got a chance to visit Houston, if to get a fresh set of clothes alone as the Republican Convention got underway at the Astrodome on August 17th. After their brief stop home, it was off to Busch Stadium for a series against the St. Louis Cardinals. Craig Biggio was the perfect spark in St. Louis with two runs and two RBI as the Astros won the opener 7-6. However, the following day Darryl Kile was hit hard by St. Louis, as the Cardinals scored a 12-1 win. The Cardinals would also win the finale 3-1 to take the series.

The last stop on the Astros 28-day, 26-game, eight city road trip was the city of Brotherly Love for a three-game weekend set with the Philadelphia Phillies at Veterans’ Stadium. Perhaps rejuvenated by the thought of their journey nearing an end, the Astros pounded the Phillies in the opener 6-1. Saturday would see a slugfest as the Astros won 14-9, with Jeff Bagwell just needing a home run to complete the cycle, and had three RBI along with Pete Incavilgia. The Astros long winding road ended on a positive note, as they completed a sweep of the Phillis with a 3-1 win. In total, the Astros had a respectable 12-14 record during the road trip.

After a day off, the Astros first game at home resulted in a hard-fought 5-3 loss in 13 innings. The one loss at home was just a bump in the road, as the Astros finished the season strong, posting a 25-13 record over their final 38 games, to finish the season at 81-81.