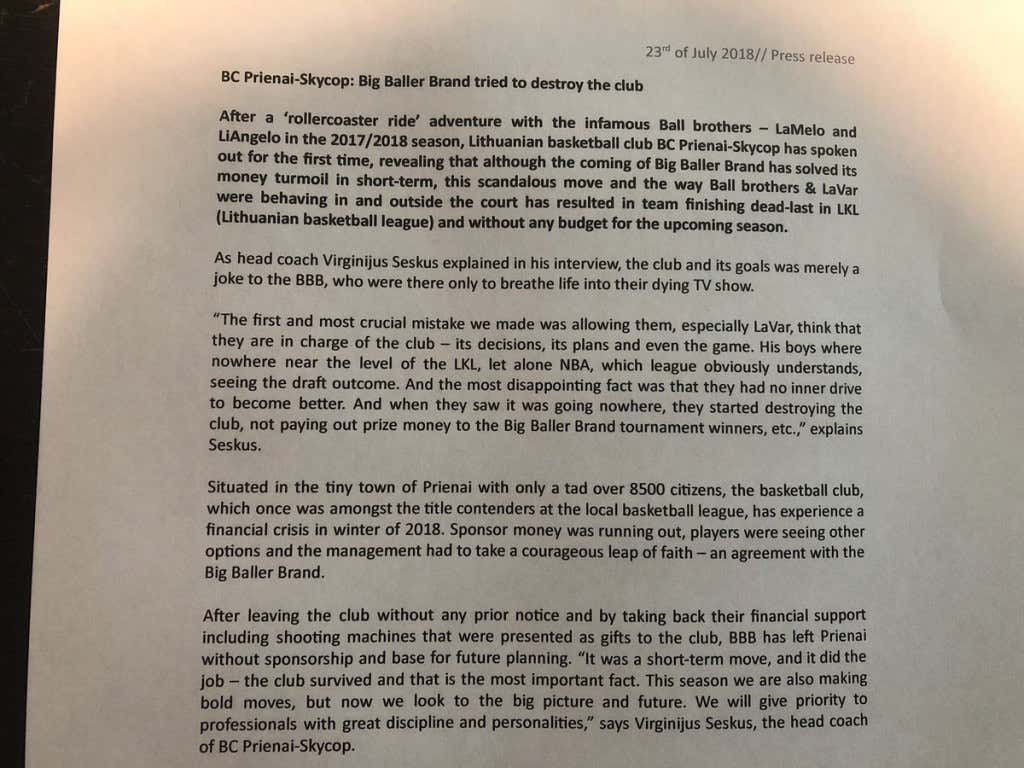 Euro Hoops- Lithuanian club BC Prienai Skycop, the former team of LiAngelo and LaMelo Ball, issued a press release accusing their father’s, Lavar Ball, “Big Baller Brand” company of making moves that would eventually “destroy the club.” The release includes some quotes from Prienai head coach Virjginijus Seskus who, among other things, says that LiAngelo and LaMelo were “nowhere near the level” of the Lithuanian LKL league and that they showed no intention for improvement.

“The first and most crucial mistake we made was allowing them, especially Lavar, think that they are in charge of the club – its decisions, its plans and even the game,” Seskus says.

“His boys were nowhere near the level of the LKL, let alone NBA, which league obviously understands, seeing the draft outcome. And the most disappointing fact was that they had no inner drive to become better. And when they saw it was going nowhere, they started destroying the club, not paying out prize money to the Big Baller Brand tournament winners etc.”

Would you get a load of this fucking guy?

Do they have the internet in Lithuania? Because if so, I don’t know what Virginijus (lol) Seskus and his team thought they were getting with the Ball family. When you bring in the Ball family, you bring in the circus. LaVar’s the ringleader, his two sons are the basketball players without a conscience, and you get a nice little bump of TMZ fame. A quality product however? Well one look at the $500 ZO2s would tell you that the BBB isn’t exactly the most trustworthy brand.

As well as the time they let fucking LaVar COACH THE TEAM.

Oh yeah and the Big Baller Brand was literally printed on the refs backs during the sponsored tournaments.

No wonder LaVar thought he ran the league. He did! It was the first time people were talking about Lithuanian basketball since Arvydas Sabonis was posting up in the paint and turned Lithuania from this in Americans’ heads:

To a place people actually cared about:

Seems like a win/win to be. This Lithuanian league got a taste of American show business while the Balls got to play some professional hoops before Lavar literally created an entire league in the U.S. to showcase his sons. Anybody who can’t appreciate that trade off is clearly a small baller that can’t see the big picture.

Heavy is the head that wears the crown.