Since the 11th anniversary of this beating was yesterday, I thought it was only appropriate to wake up with it today. I don’t think any Orioles fan will ever forget this game, or the score. The 30-3 game will live on forever.

I remember it was my first night of my freshman year of college, shoutout McDaniel. Orioles were garbage (shocker) so I wasn’t too pressed on watching the game, plus we had a ton of first day orientation stuff. I walked back from the dining hall and heard some kids in a common room laughing about the game. I didn’t pay too much attention to it, just figured they were getting their asses kicked like they always do, but didn’t think it was that bad. I got a call from my dad asking if I saw the game, I said I didn’t and he knew that because I had stuff to do. He told me they lost and I said something like “Yeah, it happens. They have another game tonight since it’s a double header.” That is when he broke it to me.

“They lost by 27. It was 30-3.” I thought there was no way that was possible, I jumped on my laptop and went to ESPN and there I saw it, the final score. 30-3. I couldn’t believe my eyes. I watched the highlights that night once I got my TV hooked up and was laughing the entire time. If there was any team that could BE LEADING 3-0 and then give up 30 unanswered runs, it was your Baltimore Orioles. As I mentioned, it was the first game of a doubleheader, so imagine getting your teeth kicked in by 27, then having to go out there a half hour later and doing it all again?!

Another great moment was before the game when the Orioles removed the interim tag off of Dave Trembley and named him manager that day. I guess it could only go up from there, eh? If you watch the video, the best part is the commentary by Jim Palmer who just doesn’t hold back on his disgust.

There are just so many ridiculous things about this game.

-The Orioles had a 3-0 lead going into the top of the fourth.

– Every Rangers starter had at least two hits and scored on run.

-The Rangers only scored runs in four innings of the game.

-The Rangers scored 16 runs after the seventh inning.

-Wes Littleton, a reliever for the Rangers, pitched three innings and got a save. 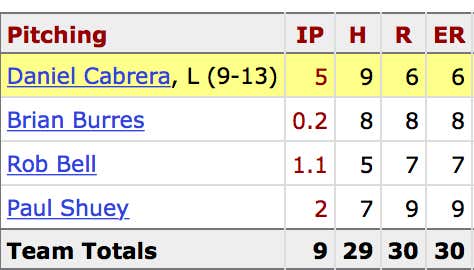 – Each pitcher that appeared for the Orioles gave up at least six earned runs.

-The Rangers had 4 players with four RBI or more. Travis Metcalf drove in four with one swing, Marlon Byrd drove in four, and both Jarrod Saltalamacchia and Ramon Vasquez both had two home runs and drove in seven.

Wouldn’t put it past this years team to let a team drop a 30 bomb on them.