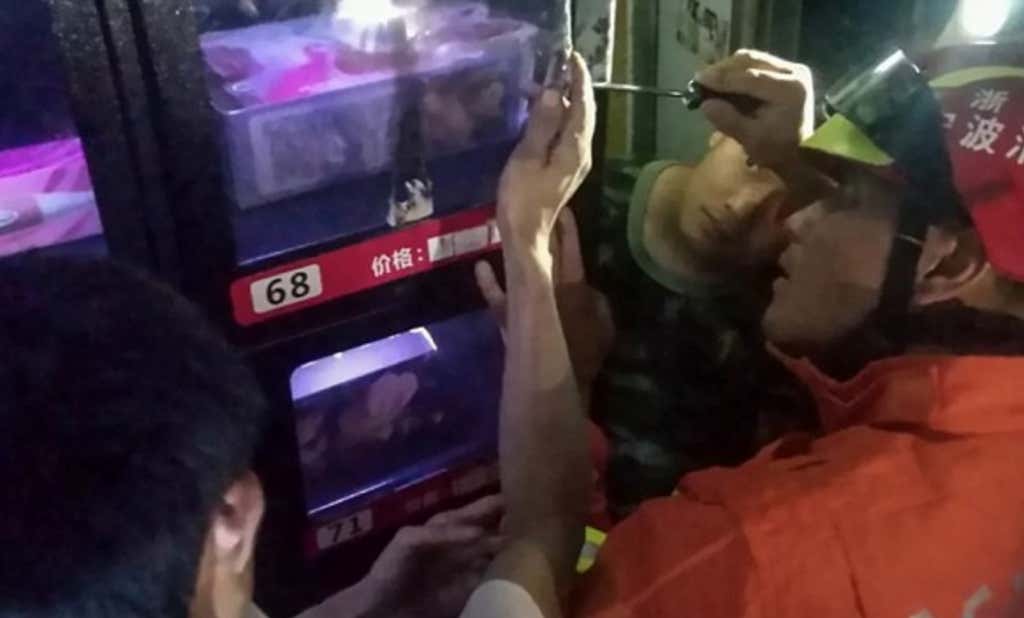 A man in China had to be rescued after getting his finger stuck in a sex toy vending machine.

The man, known by the pseudonym of Zhu, said he was trying to reach a product he had paid for through a small hole when his hand was jammed, according to Chinese media. Zhu was trapped for 20 minutes or so before being freed on Sunday night.

The incident took place near a clinic in the city of Cixi in Zhejiang Province, said Zhejiang Firefighting Department which rescued Zhu. Zhu claimed that he had paid for the unspecified product on his mobile phone, but the product failed to drop to the vending machine’s receiving slot.

He claimed to the police that he called the machine’s customer service hotline, but the representatives weren’t able to help, therefore he had to solve the problem by himself, reported Zhejiang Youth Daily. After seeing a small hole on a panel of the machine, Zhu decided to put his right ring finger into the hole in a bid to reach the product, the report said. But his finger got firmly stuck.

When you’re horny you could find your finger in a number of holes out there. This Chinese man certainly didn’t expect to find his finger stuck in the hole of a vending machine while trying to get his sex toy. But you know what? There’s no worse feeling than paying for food or candy in one of those things and it getting jammed. As a kid I remember trying to practically flip the machine over so it would come loose of being stuck in there. Granted, that was when I was like ten years old and had no money at summer camp, not a man in my 20’s trying to get a sex toy. To each their own though, I guess.

I tell you what though. If I’m buying a sex toy in public like that I’m trying to be in and out (maybe pun intended). In no way, shape, or form am I going to try and stick my finger in that machine and try to poke it out. No fucking chance. I don’t trust machines as it is. I’ll be scared to hold my arm out in front of an elevator in fear it doesn’t read my arm and just chops it off. So what happened to this man who goes by Zhu? His hand got stuck and he had to call the goddamn fire department to get free. What a disaster. A whole scene just because you were trying to get your freak on. Imagine this guy was married or had a girlfriend and had to explain why he was late to dinner that night? Or even worse maybe he had to call his mom to see what to do. It reminds me of when Jim got his hand glued to his dick and porn tape with super glue.