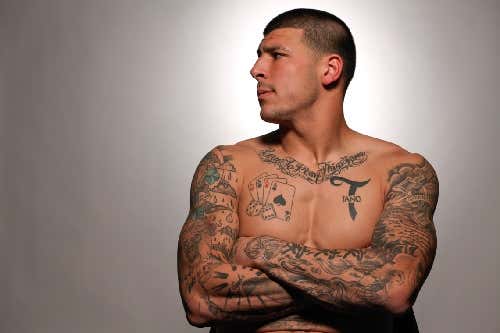 Jose Baez is the lawyer who represented Aaron Hernandez in his second murder trial. The double homicide that he allegedly committed before killing Odin Lloyd, apparently for talking about those murders that Baez eventually got him acquitted on. Which is not a knock on Baez. He was doing his job. The first killings were basically a cold case by the time they went to trial. And lawyers earn their billable hours by casting reasonable doubt, so good for Atty. Baez for pulling out the W.

And of course, this wouldn’t be the end of civilization if lawyers weren’t cashing in on their victories, which Baez is doing in no uncertain terms. By law, criminals can’t make a buck off their crimes by signing book deals, but books by the former attorneys of dead convicted killers are totally legal. A moral gray area for sure. But legal, thanks to the fact our laws are mostly written by lawyers and those billboards with them pointing that say “Have YOU Been Injured? Know Your Rights!” don’t rent themselves. So Baez has a book about Hernandez coming out now.

There have been few if any stories in our lifetimes I’ve wanted to go away once and for all like I want this one to. It’s morbid and depressing and involves three atrocities and the lives of four families destroyed forever, including the killer’s own. But Baez has his job to do, and I’ve got mine. He leaves me with no choice.

Based on the news reports, the money shot of “Unnecessary Roughness: Inside the Trial and Final Days of Aaron Hernandez” are the letters that he wrote just before committing DIY Capital Punishment with a state-issued bedsheet at MCI Shirley. Apart from Baez name-dropping the rappers he knows that Hernandez wanted to contact, the book has the text of the suicide note he wrote to his girlfriend, Shayanna Jenkins:

“You have always been my soul-mate and I want you to love life and know I’m always with you. I told you what was coming indirectly! I love you so much and know [you] are an angel. We split into two to come change the world! Your characteristic is that of a true angel and the definition of God’s love! Tell my story fully but never think anything besides how much I love you. This was the supreme almightys plan, not mine! I love you! …

I love you all equally! We are all each other! Don’t shed one tear for I am with all of you and never wasn’t! do not go back to living while worshipping false idols in which I warned you about!

On the bottom of this page is a drawing that resembles a thin rope dangling from a noose.

And to his daughter:

“Daddy will never leave you! I’m entering to the timeless realm in which I can enter into any form at any time because everything that could happen or not happened I see all at once! Life is eternal — believe!!! Love, repent, and see me/yourself in everyone because that’s what the truth is! I’ll see you all in the heavens awaiting you all with the same love. Never fear me, but love me with all of you! Fear is the only separation between you and I! We are each other — I/you — you/me — there’s no need to fear but what you do unto another will come back around!
Power of Now
Conversations with God 1, 2, 3
Home with God”

Yeah, I’m all set with that. I’ll be giving this book what it deserves, a good leaving alone. It’s human nature to make ourselves the hero of our own story. Even a guy with the blood of definitely one and probably three innocent people on his hands. But now that we know that Hernandez was basically thinking of himself as like he was MLK writing “Letters from Birmingham Jail” or Nelson Mandela being a prisoner of conscience or whatever, thanks but no thanks. I have zero desire to read more about the final hours of a raging, homicidal maniac invoking God to the very people who depended on him most.

Maybe you’ll find some value in it. Maybe you’ll find some helpful insight or some credence to the theory that CTE made him this way. But all I’ll ever see is the colossal, abominable, unforgivable waste of life by a guy who could’ve had it all, but chose the serial killer’s life instead. Do. Not. Want.