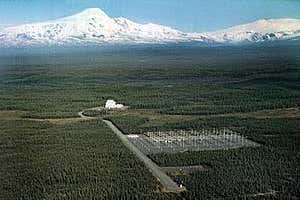 “What makes HAARP susceptible to conspiracy criticism is simple. The facility doesn’t open its doors in the same way as other federally-funded research facilities around the country, and it doesn’t go to great efforts to explain the importance of its research to the public.” – Austin Baird, The Anchorage Daily News

Controlling the weather has long been a trope in popular culture. In fact, KFC Radio was just talking hypotheticals the other day and both of those two fully grown adult babies said that they’d take the ability to control the weather over $10 million cash. It would appear the US government agrees with those two idiots, as it spent over $250 million in taxes over the course of 15 years to attempt to do just that at the HAARP Research Station in Gakona, Alaska.

HAARP stands for High-frequency Active Auroral Research Program and, according to Popular Science, was nothing more than a field of 180-antennas used to conduct tests such as zapping the Moon with high frequency beams in order to test the composition of the soil. Initial HAARP experiments detected ionization in our atmosphere caused by a gamma ray flare from 23,000 light years away. HAARP, in the early stages, was also able to detect previously unknown bunkers 300-feet below the surface of the Earth. Truly basic stuff, nothing out of the ordinary there.

HAARP’s purpose is to study the ionosphere (the section of the atmosphere beginning about 50 miles up in which ultraviolet radiation temporarily strips atoms of their electrons), the magnetosphere (the region in space above the ionosphere where the Earth’s magnetic field affects the behavior of charged particles) and the Van Allen radiation belts (bands of highly charged particles contained in the magnetosphere beginning some 400 miles up). Scientists are interested in the ionosphere because of its ability to affect radio signals; the Van Allen belt, because the radiation there damages satellites, and a better understanding of it could lead to ways to make satellites last longer. “It’s an open plasma-physics laboratory,” says Dennis Papadopoulos, a physics professor at the University of Maryland who helped conceive the idea for HAARP with the Naval Research Lab more than 30 years ago. “You test ideas and scientific theories. Then, if something’s important to the Department of Defense, you apply it.”

HAARP began construction in 1993, in a sleepy town tucked away in Alaska that today has barely over 200 residents. I don’t know about you but I do not trust Alaska. What do they got going on over there? If they wanted to be America so badly why are they sandwiched in between Canada and Russia like that? Alaska might as well be a different planet as far as this East Coast Elitist is concerned, which makes it a prime location for nefarious deeds such as blasting the Moon with plasma beams to “test the composition of the soil.” Don’t spit in my face and tell me it’s raining, Alaska. The Department of Defense doesn’t give a shit about the composition of the Moon’s soil. There are other departments for that kind of stuff. The Department of Defense is more interested in stuff like this:

HAARP’s most prominent critic was Bernard Eastlund, a plasma physicist who reportedly worked for the Strategic Defense Initiative (Star Wars) and, later, Advanced Power Technologies Incorporated, the company originally tasked with building HAARP. Eastlund, who some believe was dismissed from the company for his extreme ideas, claimed that HAARP was built with his patents—patents for technologies that could be used to modify weather and disable satellites. 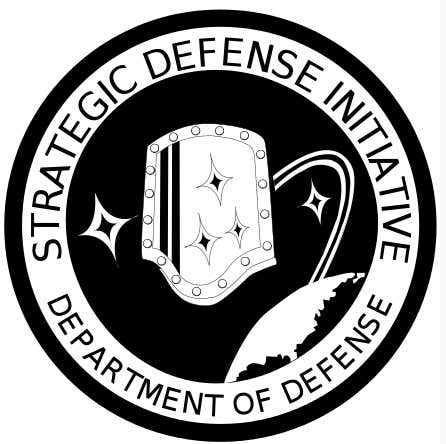 The Strategic Defense Initiative (SDI) was Reagan’s answer to the Cold War. It was set up inside of the Department of Defense to act as a combatant to the nuclear arms race popping up across the globe, with the goal being able to knock down missiles using particle beam based weaponry. The SDI was shut down in 1993 – the same year construction began on HAARP, a stone’s throw away from Russia. Huh. How about that.

Since Eastlund’s death, Nick Begich, son of a former Alaskan congressman and co-author of the 1995 book Angels Don’t Play This HAARP: Advances in Tesla Technology, has led the anti-HAARP crusade. “It’s not that I think it needs to be shut down,” Begich says. “It needs to be monitored more closely and scrutinized. The government hasn’t been up-front about the nature of these programs, and they’re utilizing the system to manipulate portions of the environment without full disclosure to the public.” He worries that HAARP may be capable of mind control because the waves it produces can exist at frequencies similar to those of human brain waves. Citing Eastlund’s patents, Begich also worries that the facility can alter weather.

Alright Nick let’s calm it down there just a smidge, buddy. I’m all for HAARP being the first step towards blasting plasma beams into space and controlling the weather on a global scale. But even I can’t get fully behind mind control. Mostly because that would be a gigantic waste of money it’s so easy to control the masses with simple propaganda and misinformation they don’t need to shell out $250 mil for that power. You remember when ESPN made everyone hate baseball because of steroids in the early-2000s? Steroids were cool as hell and no one even knows Mike Trout today because of the daily attacks on Barry Bonds and Mark McGwire in 2003. They didn’t need low frequency brain wave emulating technology for that. We’re just dumb. All of us. (What I will say in Nick’s defense is that when he was 13, a small aircraft carrying his father just straight up vanished. Poof. Gone. His father, Nick Begich Sr., was a member of the House of Representatives, and he was traveling with House Majority Leader Hale Boggs. Their bodies were never found. Ever since that day, Nick Jr. had become obsessed with government conspiracy theories. So, Nick Jr. gets to believe whatever the hell he wants to believe.)

More extreme skeptics, like Jerry E. Smith, author of HAARP: The Ultimate Weapon of the Conspiracy, suspect that HAARP was rushed into completion after the 2005 hurricane season, which included Katrina, to keep the storms from making landfall.

Good. I don’t know why Jerry is being labeled an “extreme skeptic” on this one. If the government can stop more Katrinas from happening I, for one, find that to be an objectively good thing. Frankly I don’t know why they were dillydallying on that front to begin with. They knew they were building a weather controlling machine I don’t understand the lallygagging on their behalf for all those years. Weather happens every day what kind of sick game of chicken were they playing. I want it firmly on record that I am anti-hurricane. They’re bad, and that’s my stance on the matter. You can hold me to that today, tomorrow, 20 years from now.

Of course, no conspiracy theory would be complete without a cameo from former governor Jesse “The Body” Ventura.

Anywhere or anyone that doesn’t immediately allow access to The Body is a big time red flag in my book. That man was a Navy SEAL and a commentator for the XFL all in one lifetime. Wherever he wants to go he’s allowed to go, imho. So if you’re hiding something from The Body, you’ve got something big worth hiding.

We may never know what fully went down at HAARP, as the Air Force announced in 2014 that it would be shut down. By August of 2015, its ownership and equipment was transferred to the University of Alaska Fairbanks. The facilities are still available for any researchers who would like to pay to blast the Moon. The University has also made an annual open house for visitors every August in an effort to try and combat these conspiracy theories. Which, yanno, would mean anything if they didn’t start in 2016 – two years after the government pulled out. Pretty convenient if you ask me. Which, you didn’t, but if you’ve read this far and don’t have any questions that’s on you, bub.

As far as conspiracy theories go, this one’s got a whole lotta meat on its bones. I don’t think the government can control the weather – yet. But I’ve seen enough to say confidently that they’ve sure as shit tried to.