First off, Riggs needs to be real careful. I really don’t want to have to cover hockey and golf for Barstool but you may force me to take your job. Next, I need to make this clear… there is no comparison between Riggs and I, I am writing this in response to that BOZOs blog about our impending golf match but this is the definition of punching down. I’m tall, he’s not. I’m athletic, he sort of is? I guess if you play* college hockey you have to be somewhat athletic but 15 games in 3 years is pathetic. 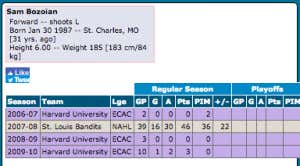 Who plays a year of college hockey then goes back to play junior. Imagine going from a dorm on a college campus with girls running around to living with a billet family playing in the North American Hockey League. Talk about a tough look. I’m rich, he isn’t. I have nice blue eyes, he… well everyone has seen his eyes.  I was going to Nantucket before Dave ever even heard of the island, Riggs has a shrine to Dave in his 600-square foot apartment in NYC.

Which brings me to my next point, have you ever seen someone try to sound like Portnoy more than this peasant Bozo??

I could go on for days. Let’s not forget he cried on barstool radio this year. He cried! I feel like Matt Damon in Rounders when he tells Teddy KGB he could keep crushing him in poker once he notices his tell while eating Oreos. (speaking of Oreos how many of those has Riggs eaten in the past few months. His body is disgusting)

Either way the point is that in terms of life, I’m beating Riggs. He’s a nice guy and all, so I’ll pretend we are equals for the sake of a blog post.

But I love golf, that’s always been clear. Hated it growing up (I was too busy shooting pucks and getting drafted 5th overall while Rigs was playing Halo and reading Catcher in the Rye) but I started playing often 9 years ago. I was probably a 16 handicap then and have worked down to a 2 index currently. Golf is the hardest sport in the world. Ill argue that with anyone. I was hoping I would get to a legit scratch someday but I am probably as low as I’ll ever be currently. Especially with a young son at home and hopefully more to come. I can go out and shoot even par or I can go shoot 85 any day of the week. I don’t have much consistency but either way as golf nuts know, once you have the bug you’re in it for life.

So, I’m sitting around yesterday and see that Riggs responds to someone on twitter (I don’t think this tweet was him talking in the third person per usual thank god) who says he and I should play in a match.

I responded saying of course I’m in. I don’t know Riggs that well but have some mutual friends and know he is a solid player who even though is claiming now he never plays still plays a lot.

SO, in knowing he is the one saying he wants to play me and us being close in skill (he’s a 5 handicap) I figure like any logical human being who isn’t cross eyed and overweight that we are going to play straight up. After bringing that up this moron throws a hissy fit. “I need my shots! you play every day! I work in Manhattan and video myself walking to work even though no one wants to see that because I’m not Dave!” Bro you asked me to play. A little strange to ask someone to play a match but then look for your strokes. As my good friend Jay Driscoll (former Ouimet champion) says “if two guys both beneath a 6 index play a Juan on Juan match and don’t play gross play (no strokes) its a sad look for the pigeon taking his 2 shots”.

Riggs can have his shots or he can risk to lose less money than me and we play gross. This is the most I’ve written since my junior year in high school and my head is about to explode. Maybe that’s because I’m a #brainlessmuppet. (sweet hashtag bozo). But I would rather be brainless than #handicappedRiggs because he’s sitting in an office in disgusting Manhattan and I’m about to hit a couple balls and sit by the pool.  What a life.

PS Riggs if you thought this blog was a blood bath just wait until you see what our loyal Spittin’ Chiclets listeners will do to you. Stay hot Riggs.