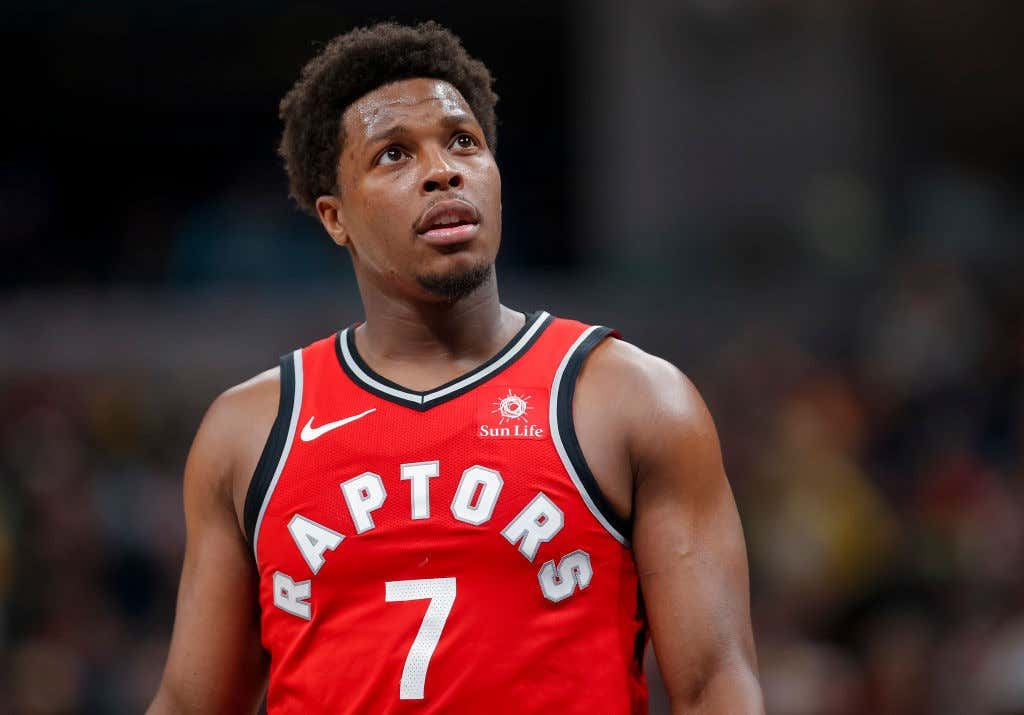 Alright we’re back! This was a blog series I started last summer that was pretty well received so we’re back for another year of NBA Season Previews. For those who didn’t read these blogs last year (what the hell man) this is basically how they go down. These blogs are strictly a result of what you, the stoolies want to read about. I put out a tweet listing four teams, and whoever gets the most votes gets the blog. Pretty simply stuff. Now because I’m not one to step on other bloggers toes, this series does not include any of the teams from cities that already have bloggers. So that means no Knicks, Wizards, Bulls, Sixers etc. If one of those guys wouldn’t care and would like me to write their preview I’d be more than happy to do so, but I certainly wouldn’t love someone writing about the Celts, and there’s plenty of other teams to get to. The goal is to get any many teams in as possible before the October 16th Opening Night, so be on the lookout for each poll and let’s start getting ready for what is sure to be a ridiculous 2018-19 NBA season that is around 60 days away. 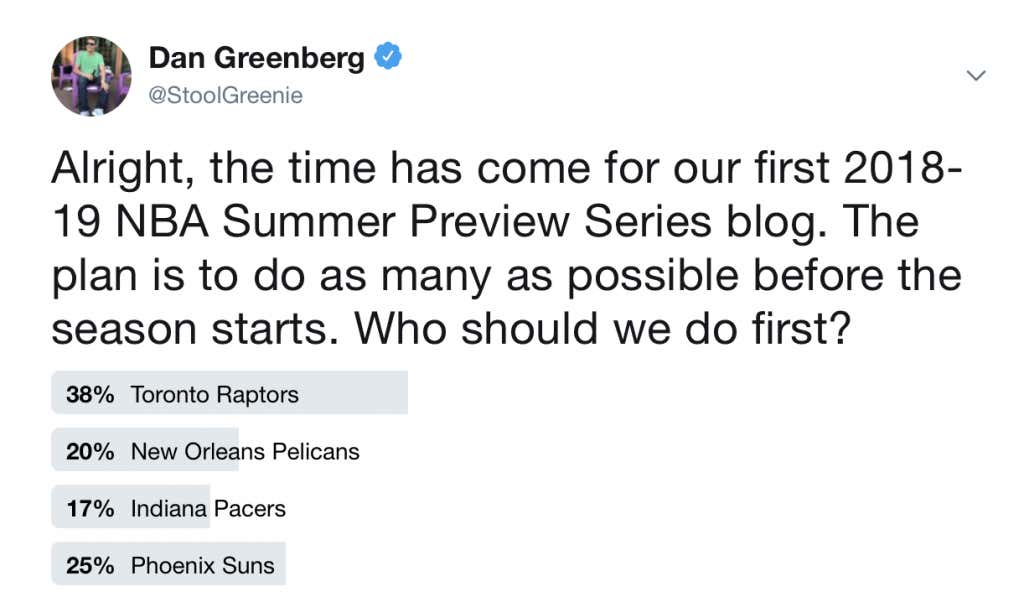 There are a few teams this upcoming season that I can’t wait to see play, and the Raptors are certainly in that group considering the summer they had. You see all last season the whole narrative around this team was that things were different. They won 59 games, snagged the #1 seed and were a ridiculous 34-7 at home while having the second best point differential in the entire league. But for them, the regular season never really meant much when it came to convincing the basketball world that things were in fact different. For that to happen, this team was going to have to make the Finals. Over the last 5 years (the start of their current playoff streak) the Raptors have advanced past the second round just once, obviously losing to LeBron in the ECF. When it was all said and done, and LeBron swept the Raptors for the second consecutive year in the second round, we learned that things were actually not different when it came to this Raptors team. As good as they were during the regular season, when they were challenged with getting past their personal Boogie Man, they caved. Again. After that collapse it was clear things had to change, and that’s where the Raptors offseason started to get a little crazy. They fired the Coach Of The Year in Dwane Casey which had to happen just because the organization had to show it’s fanbase some sort of change, even if he wasn’t really to blame for their inability to beat LeBron. They then resigned one of their more important players in Fred VanVleet and things looked like they were bringing the band back together. Then, a few months later they pulled off the biggest trade of the off season which immediately made them one of the most intriguing teams heading into next year. As it stands today, this is their roster 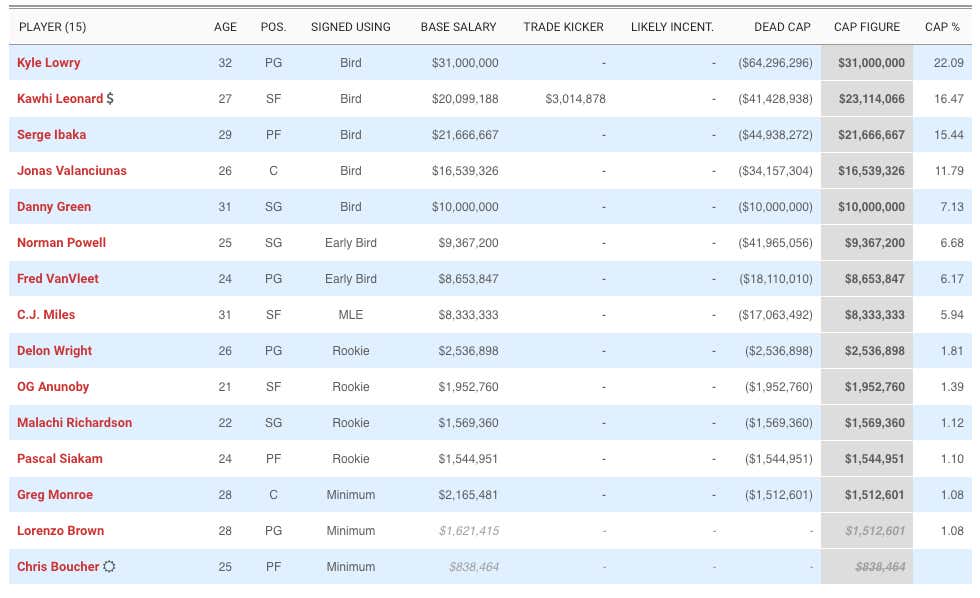 At $139,303,610 this Raptors roster is currently the 3rd most expensive roster in the entire league, and obviously the most expensive in the East. If you can get past the playoff failures, at least this is a team that has an expensive payroll, but actually contends at the top of their conference. If you look at some of the ages on this roster, the Raptors are clearly in a “win now” window, as no projected starter is under the age of 26. They key to this team finally getting over the hump for real comes down to a couple things in my mind. The first being there’s no LeBron, so their chances are better than they ever have been during this current era of Raptors basketball. Another is everything comes down to Kawhi and his health in my opinion. If Kawhi is going to start next season and be the Top 5 player we all know he can be, then this Raptors team should be pretty fucking good. But if he isn’t healthy, and doesn’t return to that same form, it’s sort of a death blow to this whole operation. This is a team that has finished atop the East in four of the last five years, and the one year they didn’t, they came in second.

Now they have a new coach in Nick Nurse, but the good news is he comes from the Raptors system where he’s spent the last 5 years, so it’s not as if things are going to have to drastically change. He was in charge of their offense last year and was pretty effective if you ask me, as the Raptors had the 3rd best Ortg at 111.0. The Raptors played at a slightly faster pace last season, and the biggest change in their approach last year was how they treated the three point line. You see in today’s NBA you have to be able to use this as a weapon, and the Raptors saw 31.7% of their points come from behind the arc, which was good for 9th in the league. That was a drastic improvement from the 2016-17 season in which they only had 24.8% of their points come from deep, which was 23rd in the league. A huge part of that improvement came because of CJ Miles, who had his first season in TOR last year. He was 2nd on the team in 3PA with 454, and when you combine that with DeRozen taking the most 3PA of his career (287) the Raptors became a legit threat from deep for really the first time in years. Raptors fans should not have to worry about Kawhi not being able to replicate DeRozan’s three point production, as he’s already a much better outside shooter and took 387 threes in his last healthy season. You also factor in the addition of Danny Green and his shooting ability, and this may be the most shooting the Raptors have ever had over the last handful of years.

Another huge part of this team’s success has to do with their second unit. Some say it’s the best in the league and it’s hard to argue with that claim. The bench unit’s 41.8 points a night was good for 5th in the league, and their 46.8% from the floor was good for 4th. The bench is something the Raptors tend to rely heavily on, as they played 21.2 minutes a night (2nd in the league) and with most of their key bench players returning, I expect more of the same especially because this is a sneaky old roster. Because they rely so much on their second unit, it’s no surprise that the Raptors continued their trend of being really fucking awesome at home, and then being pretty average once they hit the road. Where they struggled was defensively, giving up 5 more points a night (106) on the road as compared to at home, so it’ll be interesting to see how they solve for that. Because make no mistake about it, as much as this team has improved offensively over the past year, their bread and butter is still lock down defense. This is a team that had a Top 5 Drtg at 103.4, and held opponents to 44.9/35.7% splits. They protect the rim as good as any team in the league finishing last year 2nd in blocks. You add a defender like Kawhi to the mix and things should only get better.

There’s obviously a good amount of risk with this team, whether it’s Kawhi bolting at the end of the year or some older players actually staying healthy. For example Kyle Lowry played 78 games last year, but he’s only had back to back seasons of 75+ GP once in his entire career and it was over a decade ago. While they have the guard depth to maybe absorb some missed games, that’s something all Raptors fans will be keeping an eye on. When you look to their future it shows you why this is such a win now team, because when it comes to draft picks, this is not a team with a whole lot of future assets

It’ll be interesting to see how guys like OG Anunoby develop and if they can take a serious leap like other young promising talents in the East, and on paper this team fully healthy is absolutely going to live in that Top 3 range in the East. They’ll defend at a high level, be dominant at home, and most likely be even better at shooting. But at the end of the day none of that really matters to Raptors fans if they continue to fail in the postseason. I would say the expectations the Raptors have is to make the NBA Finals, just like it was last year. You can’t be this good and win as many games as the Raptors do and not have those expectations. Anything other than a Finals appearance has to be considered a disappointing season.