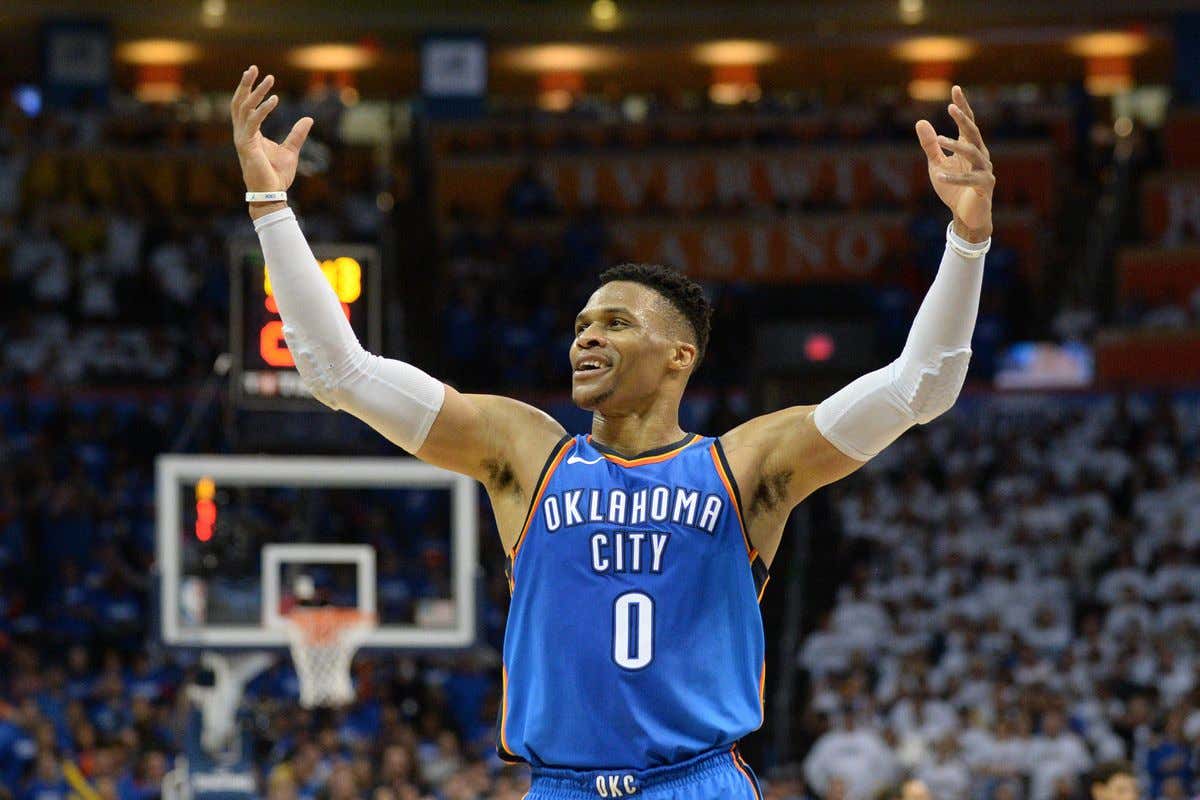 I mean from a statistical standpoint he really didn’t take much of a step back last year. He played just one less game 81 vs 80. His effective field goal percentage was exactly the same. The only two regressions was 3pt shooting (5%) and points per game (5ppg) average. It’s not like he had some massive regression year over year. So with that in mind, yeah I think Westbrook will be in that MVP candidate talk again this year. He’s not going to take a massive step back and the Thunder have some pieces that fit a bit better this season. He’ll be somewhere around where he was the last two years.

I mean ideally RJ Barrett. They need to continue to add wing help and Barrett is the best player in the Draft. You throw in Barrett with Kristaps, Knox, Robinson and Frankie you may be on to something there. He’s the most polished player already and fits that versatility role so many teams are looking for. If not him I’ll stay at Duke and take Cam Reddish, who is another wing. If you’re in the top-5, you have to go wing here.

Realistically? Not a lot. I mean Cincinnati and Wichita State I’d be comfortable saying should be in, even though Wichita does have to rebuild. I just trust Gregg Marshall when it comes to development. Other than that you still have a bunch of questions. I think Houston should be a NCAA Tournament again. But, then can Hurley get UConn back there in year one? They should have enough talent on paper. I’ll stick with 3 from the American.

Right now only 10 players have their numbers retired by the Lakers. Out of those 10 the only one to really look at to compare LeBron to (and it’s not even a great comparison) is Shaq. He played for the Lakers from 96-2004, so an 8-year career. LeBron is likely going to play for the Lakers for just half of that. In order to get his number retired he’ll have to win at least one title. I think if he’s able to win a title and MVP while making the Lakers a top team in the West again, he’ll be in talks about it. I do think it’s a bit of longshot though just because of how short his career with the Lakers is expected to be.

First off, we’ve only seen them in exhibitions. On top of that we’ve only seen Duke play once and they weren’t at full strength. So let’s not pretend like we know who these teams are. In fact these are the two teams who will improve the most throughout the season with their youth. That said I’m still taking Kentucky as of August 17, 2018. Nothing has changed from before we saw these two teams play exhibition games. I just like Kentucky’s depth and roster versatility more than Duke despite Duke having better top talent. It’s essentially what it comes down to for me.

No and I hate people that complain about this. Bilas is one of the best announcers in the game and I never watch something thinking there’s a Duke bias. What’s he supposed to do? Refuse to call Duke games? Are we going to have Syracuse play by play guys refuse to call Syracuse games? I mean everyone is from somewhere, what are you supposed to do? There’s always a ‘bias’ in anything in life. Let’s all agree to stop bitching about Bilas calling Duke games. Now if it’s about him calling out the NCAA but working for ESPN? I understand the argument but again, what’s he supposed to do here? In theory no one who is anti-NCAA would be able to work in sports or around sports.

As of right now it’s still the Knicks. They have the best player on either roster in Kristaps. They have the more promising young player in Kevin Knox. Now, it ends up coming down to a) how does Kristaps look when he returns from injury and b) free agency. The Nets could be in position to sign two max deals. The Knicks can still get big players too. I think the Nets end up with a better year this year because we don’t know when Kristaps plays but I’ll take the Knicks set up better for the long term.

There are a handful of duos that jumped out right away. There’s a couple ways to look at the duos here. Do you go guard/big. Do you go wing/wing. Do you go guard/wing or wing/big? The one thing you can’t really do is go guard/guard or big/big. So with that in mind here are some of my favorite NBA jam duos:

There are a bunch of other options, but those are the ones that I’d list as the best. Who would you take?