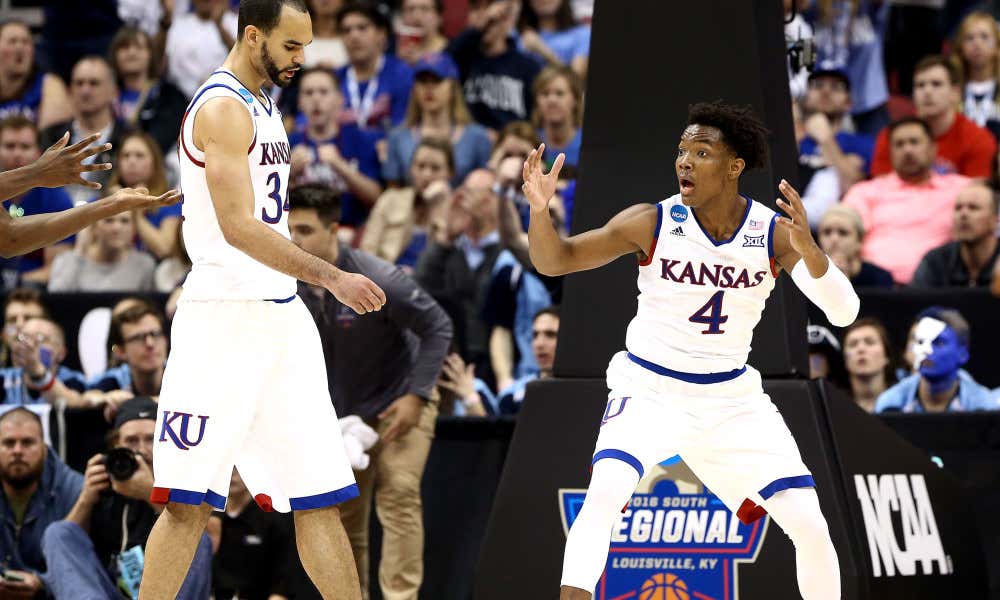 Today we move on to one of my favorite awards. The How The Hell Are They Still In College team. Pretty simple formula here as I’ve been doing these for about eight years now. These are the guys who have been in college forever. The ones you turn the TV on and go ‘wait, I thought they graduated two years ago.’ It’s the Perry Ellis joke without Perry Ellis being the winner here essentially. There’s been plenty over the last 10 years to come up with this team, so let’s see who we have here:

10. Devonte’ Graham (Kansas)
Graham is your traditional how the hell are they still in college team member here. He had a role as a freshman playing just about half the game, so you know his name for all four years. As a sophomore he immediately became a starter while playing next to Frank Mason and over 30 minutes per game. He eventually turned into an All-American as a senior, which somehow was only a 4-year career.

9. Grayson Allen (Duke)
Grayson Allen just graduated. His breakout performance against Wisconsin in the national title game? Yeah, that seems like it was 10 years ago. Similar to Graham, he’s a traditional member of the team thanks to that breakout. As a sophomore he was the go-to guy for Duke and many thought he would be that player going forward. We know all about his career and the ups and downs, which made it just feel longer than 4 years.

8. Daxter Miles Jr. (West Virginia)
Unlike the first two guys on the list, Miles actually started as a freshman at West Virginia. Unlike the other two though, his name first came up because of a negative reason. He notoriously was the one who said West Virginia was going to snap Kentucky’s undefeated season in the Sweet 16. Kentucky won 78-39. Miles had a real nice career alongside Jevon Carter, starting all but 12 games in his career.

7. Kyle Wiltjer (Kentucky/Gonzaga)
We have our first transfer on the list here. Kyle Wiltjer was part of the 2011-12 Kentucky national title team and then was the lone returner for the 2012-13 team. After that season he decided to transfer to Gonzaga and continue the Canadian pipeline for the Bulldogs. Wiltjer turned into an All-American at Gonzaga, but that 5-year career just almost immediately makes you a key candidate for this list.

6. Stilman White (UNC)
Our first true non-traditional player on the list. Stilman White played with 36 different teammates at UNC when he arrived on campus in 2011. He famously had to fill in at point guard when Kendall Marshall suffered an injury during the 2012 NCAA Tournament. However, White took a 2-year hiatus for a Mormon mission after his freshman year, so he didn’t graduate until 2017.

4. Perry Ellis (Kansas)
Ah, Perry Ellis. The man who everyone will typically say when it comes to this list but that’s just because he looked old. He actually had a very similar career to Graham, as he played just 13 minutes per game as a freshman. He then immediately became a starter as a sophomore and continued to be a go-to guy for Kansas for three years.

3. Scott Martin (Purdue/Notre Dame)
Scott Martin was a high school teammate with Robbie Hummel. Robbie Hummel felt like he was in college forever and Scott Martin graduated after him. He transferred from Purdue to Notre Dame after his freshman year and then had his senior year cut short at Notre Dame with an injury. He played over 20 minutes per game every season during his career.

2. Spike Albrecht (Michigan/Purdue)
The hero of the first half in the 2013 NCAA Championship game ended up being a guy that was in the Big 10 for a half of decade. His junior year at Michigan was the one that he really broke out, playing over 32 minutes per game and averaging 7.5 points per game. We’ll never forget that first half against Louisville no matter what the NCAA record books say.

1. Roosevelt Jones (Butler)
Maybe it was playing in three different conferences. Maybe it was the fact he was a starer as a freshman. Maybe it was the NCAA Tournament runs right before he joined Butler so all eyes were on them. Maybe it was his unique game so you always knew about him. I don’t know. But, whatever it was, this guy felt like he was in college forever. This is the captain of my team here and I appreciate the fact he only shot 4 threes in his career.