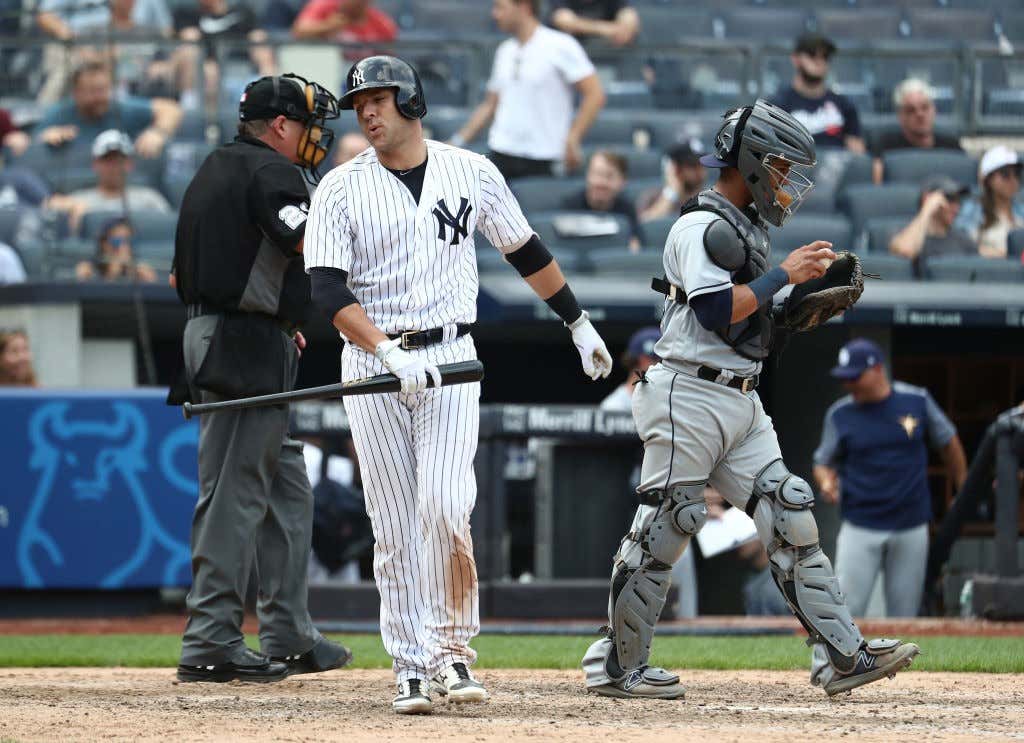 Watching that 9th inning potential comeback was honestly impressive. The Yankees loaded the bases with nobody out, trailing by two runs to the juggernaut Rays. They didn’t put a fucking ball in play in fair territory in the next three at bats. Not one. Greg Bird? The man who puts together some of the worst at bats I’ve ever seen swung at the first pitch of a brand new pitcher and fouled out on the third base side. One pitch, one out. Thanks for coming out Greg. I’ve never been more right about someone in my life than Greg Bird. This guy stinks at baseball. Greg Bird truthers will tell you he’s going to come around and he just needs the at bats. Well, we’ve been waiting and I’ve got nothing. Besides a home run off Miller in the playoffs, one good September last year and a decent week this year he’s been the worst hitter on the team. I can’t stand this guy and his unproductiveness. He’s useless.

Next up was Brett Gardner. He entered this game hitting a scorching .223 over his last 52 games. Well, at least he didn’t foul out on the first pitch right? Brett managed to stay up at the plate for four whole pitches before striking out helplessly. Two outs. Austin Romine came up to be the savior and also worked a courageous four pitch at bat, ending in a game-ending strikeout. Three of maybe the worst at bats of the year. Lifeless is a word I’ve thrown around a lot lately, and it fits perfectly. This team is lifeless right now without Aaron Judge and Gary Sanchez. Masahiro Tanaka started off shaky today giving up two runs in the first, but ending up throwing five scoreless frames after that. He was perfectly fine today, but this offense had no answers….to the RAYS!! Pathetic.

The 2018 Yankees are having the strangest season I can remember. Whenever I get negative, people love to remind me that this team is 29 games over .500. Well, they’re also 10.5 games back of first. They’re also clinging to a Wild Card spot at this rate. They’re on pace to win 100 games and I don’t feel comfortable that they’ll even make the playoffs. That’s not being negative. That’s being realistic. The jolt this team needs is Aaron Judge because inserting him into this lineup changes everything. They score a run and a half more per game when he’s in there. He changes EVERYTHING. The problem is no one really knows for sure when he’s coming back. The three week time-frame that was originally given when the injury first happened is up. He still hasn’t gripped a bat, although he has taken swings underwater they’ve said. Now I knew right away three weeks was not going to happen, but the fact that he hasn’t gripped a bat is troubling. Three weeks from now, which would be six total, is that realistic to have him back? I fucking hope so or this team is in real trouble. I joked after the game if you are allowed to cuncel when you are 29 games over .500, but man this has been a brutal two month stretch. They can’t get on a roll whatsoever while the machine that is the Boston Red Sox does not stop for anyone or anything. Sure we’re 29 games over .500, but that was the case in early July too. They have made zero ground since that time frame. They’ve just been stagnant, while basically the entire team goes on a slump, minus Andujar and Stanton. Listen, I’m a negative guy by trade so I’m sorry for the tone of everything that comes out of my mouth lately, but I don’t know how you can be very positive when you watch this team play every day. Things will get better if/when Judge and Sanchez return and hopefully return to their normal form, but right now it’s bad. I think it’s imperative for Judge and Sanchez to be back for that west coast trip in early September. With the wild card slots up in the air, those games are going to be MASSIVE. Still though, fuck Greg Bird.

Don’t worry guys! Greg Bird is just happy to be playing because this is the most games he’s ever played before! Yay!!!!!!!!!!!