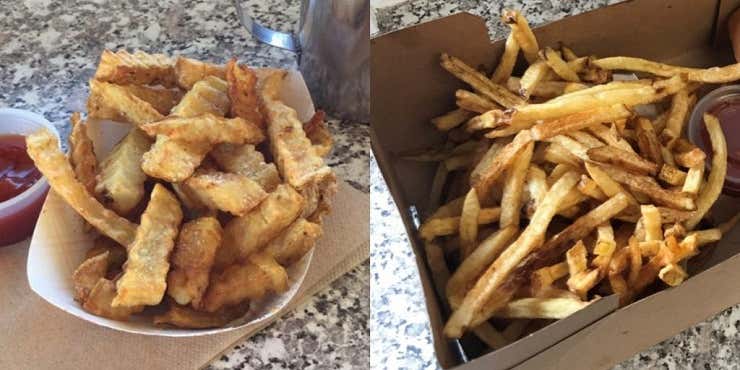 Waterville, Maine – Bolley’s Famous Franks made a change in late June that has left some customers feeling heated.

What has them so worked up? The College Avenue icon’s decision to switch from crinkle-cut to straight-cut french fries.

Recently, the outrage about the change made by owners Leslie and Jim Parsons has escalated. Jim Parsons said a man came in earlier this month, angry about the change, and ended up threatening to fight him when he was kicked out for becoming disorderly around customers.

“People come in with a negative attitude that the fries aren’t going to be the same,” Jim Parsons said Tuesday. “That’s a tough sale for us.” …

In the kitchen, a heavy metal machine affixed with crinkle-cutting blades sits idle next to a straight-blade spud cutter. The crinkle-cut fries are cut vertically and horizontally with two sets of special blades that are sold in boxes of 10, and are usually purchased monthly. Leslie Parsons said the blades are flimsy, and half of the money the restaurant took in from french fries went back into repairing or buying blades.

“As businesses, we have to make tough changes,” she said. “We have not changed the quality or the taste, just the cut.”

The new fries, about as thin as McDonald’s fries, are exactly the same product, aside from the aesthetics.

Boo hoo, Leslie and Jim Parsons. Go cry me a river. You knew the risks when you bought Bolley’s Famous Franks. You knew that the “fame” in “Famous” came at a price. And if that price happens to be crinkle-cutting blades, well then by God you pay that price. Even if you have to buy tungsten carbide blades with diamond edges and cores made out of Adamantium like Wolverine’s skeleton, you do it.

Nobody wants to hear your sob story. They just want the blessed crinkle-cuts your empire was built upon, not your low rent, animal slop straight-cut fries. Just potatoes carved into shoestrings with no thought or care put into them. The food equivalent of the Cleveland Browns. Crinkles are superior in every way and the people upon whose backs the Bolley’s empire was built understand that. I’m a big advocate for Using Your Words instead of resorting to violence. But I can for sure understand what drove them to it. What the late great Sam Kinison called “turning Mr. Hand into Mr. Fist.” You can’t tell a population raised on amazing and distinctive crinkle-cuts to simply accept your cheap and disgusting straight cuts like nothing happened. You cannot.

I’m sorry if the Parson feel threatened. But they brought it on themselves. As far as I’m concerned, if those customers don’t bulldoze the place, burn it to the ground, then smoke the ashes, the whole town of Waterville deserves the Nobel Peace Prize.