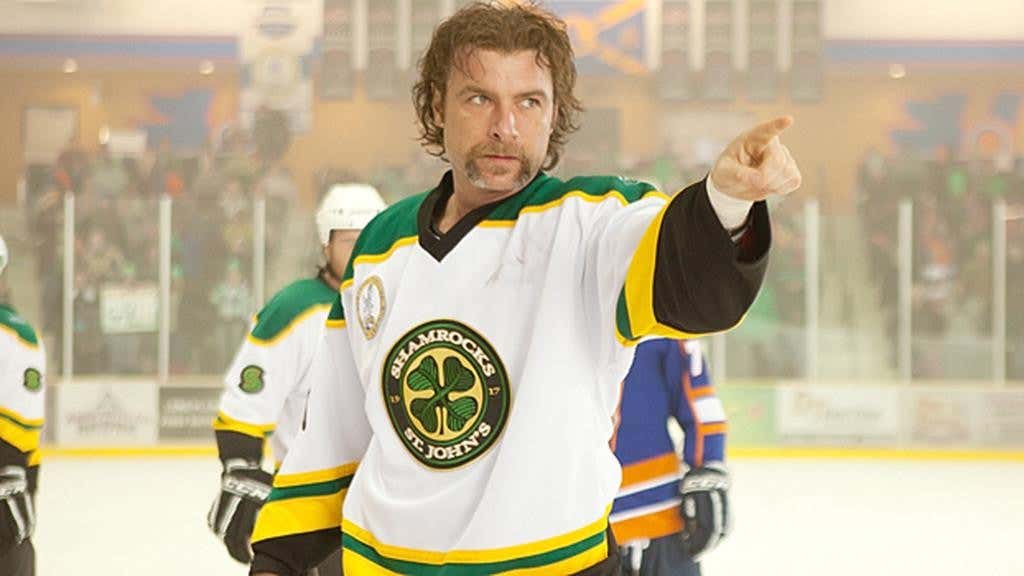 The headline pretty much says it all. I spent way more time than I had originally anticipated in writing this blog so I’m not going to waste any more time now with an intro. We’re just going to get right into it. Here are my picks for every NHL team on who they should select out of the HML (Hockey Movie League).

If you disagree with any of my selections, who cares? It’s August. Just enjoy.

Chara isn’t going to play forever. Might as well find a replacement for him now while you still can.

The Buffalo Sabres are one good goalie away from being a legitimately good team. Might be a little unorthodox to sign the Cat but I think it might just work.

I wasted way too much time thinking about who the Red Wings would take before I realized that these bozos literally have zero cap space to work with. Like not a single dollar. So you take Happy Gilmore and let him play golf so you don’t take the cap hit.

First off, it makes sense geographically. He’s from Miami so this would be his hometown team. Plus, it would give Barkov somebody to work with on his wing. That much speed would be a lethal combo.

You know that they’d have to take a French Canadien. Obviously Laflamme has his issues here and there but he’d definitely be a big get for the Habs. Especially if they move on from Pacioretty.

It’s funny because the Ottawa Senators are already a circus enough as it is.

I’m giving Ross Rhea the Ray Bourque treatment here. He’s just looking to win a Cup before he hangs up the skates for good, and I think the Bolts give him the best chance at doing that.

Obviously the Maple Leafs are loaded with a ton of young talent. But they need some experienced leadership in that locker room. Patrick Marleau is great and everything but I think he’d admit that he could use some help in that department. Derek Sutton will mold that core into a team that can reach their potential and get out of the first round of the playoffs.

The Hurricanes are currently the team with the most amount of cap space available. So not only do they have the money to sign all 3 of these guys, but they also need to find a way to bring fans to the building as well. It’s a win-win for everyone.

I don’t know if I’m off base here or not but I just feel like the Blue Jackets don’t have a ton of leadership in that locker room. No disrespect to Nick Foligno or anything but he’s never really struck me as a captain type of guy. So that’s where Charlie comes in. Hopefully he can also find a way to control Torts.

The Devils have plenty of talent at forward, they have Schneider between the pipes. They added a few nice pieces on defense last year with Butcher and Vatanen, but I still feel like they need another piece back there on the blueline. Dean Portman can be a Scott Stevens type of guy back there and he also has plenty of offensive upside as well.

When the Islanders lost John Tavares, they lost their entire identity. The face of their franchise is gone and now nobody really knows what to expect out of this team. I mean Mat Barzal is a damn good player and everything but is he ready to be the guy? I don’t know. But Ned Braden could ease the workload for Barzal. Plus he kind of seems like a Brooklyn guy to me.

I mean, he’s already under contract with the Rangers so this one just makes sense.

Are the days of the Broad Street Bullies behind us? Yes, yes they are. Ogie Oglethorpe was born to be a Flyer. He already looks great in Orange and Black. And he’s pretty much an upgrade over Gudas anyway so I don’t see any harm in signing him.

I mean listen… if PPG Paints Arena is going to be wired with explosives, there are only two men in this world who can help save the day. One of them is Michael Scarn. The other is Darren McCord. Sure, he may not help out a ton on the ice but you have to imagine the Penguins will play much better when they’re certain their stadium isn’t going to explode.

Washington Capitals – The Russians from Goon

Because the Caps love Russians. That’s all.

Doubt I have to explain this one. And don’t blame me if this is a racist pick or not. Blame Slapshot and blame the Blackhawks’ logo. I’m just here putting the pieces together.

Without Nathan MacKinnon, the Colorado Avalanche are absolutely nothing. They desperately need to give him some help with secondary scoring, or at the very least they need to be able to open more space for him on the ice. So imagine throwing Fulton out on the ice with him? That slapshot demands respect and it spreads out the defense. Thus creating more room for MacKinnon to do his thing.

The dude likes to have a good time and party. I think he’d get along great with guys like Seguin and Radulov. Might not be the best thing for the locker room but they would absolutely dominate that town.

The Wild need a guy on the team who can just light the lamp at will. It’s not that they necessarily lack scoring all together, but they definitely don’t have that guy on the roster who you know can completely take over a game. That was pretty evident when they got shutout in back to back games to close out their series against Winnipeg in the playoffs last year. Dean Youngblood can be that guy for the Wild. Kid scored 92 goals in the New York League.

I’m just not convinced by Jake Allen in net for the Blues. I think he’s a decent goalie for sure, but do I think he’s a stud? Absolutely not. I think if you bring in Belchie, at the very least he is going to compete his dick off for that starting spot. That’ll only force Jake Allen to up his game as well. So you either have a stud Jake Allen in net or you have Marco “Belchie” Belchior who is going to battle every shot he sees. Seems like good competition to me.

Cowboy Dwayne would thrive in Nashville. Plus if you put him on a line with Filip Forsberg, nobody would ever be able to take the puck from them.

Anaheim Ducks – Anybody from the Hawks (Mighty Ducks)

Ducks taking players from the Hawks. A tale as old as time. Worked out pretty well for them the last time it happened, don’t see how it would be any different this go around.

The Coyotes are similar to Toronto in the sense that I think there’s a really good, young core developing there. However, the situation with Arizona is much different than Toronto because I feel like they’re constantly in fear of relocation. If there’s anybody who knows how to deal with that, it’s Reggie Dunlop. A veteran presence both on the ice and in management.

The Flames have all the talent they need right now. They just need somebody who is going to get the best out of them. It wasn’t happening with Glen Gulutzan and I really don’t see it happening with Bill Peters either. Gordon Bombay can teach this team to fly together.

This is pretty similar to MacKinnon and the Avalanche. The Edmonton Oilers really need to find the right person to play with Connor McDavid. Guys like Lucic and Patty Maroon are the right idea, but they have the ability to slow down Connor’s game. So a guy like Anders Cain? A guy who not only has an edge to his game but also a ton of skill? That’s what you’re looking for right there.

Kinda like Luis Mendoza in Florida, this one just makes sense geographically. Russ Tyler is from LA and just think about what the Kings’ blueline would look like with him added to that top 4. Between Russ Tyler and Drew Doughty, the Kings defense would be putting up better numbers than most forward groups in the NHL.

Doug Glatt is a warrior. A guy who will do absolutely anything to help his team. I feel like that would go a long way with guys like Joe Thornton and Brent Burns. They’d respect the hell out of that attitude. Plus I think he’d really get along great with those guys off the ice as well.

People forget that Dave Heinrich was able to take the last place Annapolis Angels to winning the Stanley Cup over the Delaware Demons. The Vancouver Canucks are in need of that kind of turnaround.

The Vegas Golden Knights were a great story last year. A roster full of “misfits” who advanced to the Stanley Cup Final in their first year of existence. It’s a feel-good story for sure, and it was admirable what they were able to accomplish. With that being said–eventually they’re going to need a legitimate star in there if they are going to continue to build. I know they have their guys like William Karlsson who unexpectedly became stars. But you never know how long that success is going to last for guys like that. It would be wise for the Golden Knights to bring in a sure thing. So why not grab the greatest hockey player there ever was in Adam Banks? Let’s just hope that Goldberg doesn’t follow him to Vegas. Can’t trust him in that type of environment at the moment.