About to start hour 2 of Barstool Breakfast, and then heading up to Sirius office later to interview Reverend Run.

Advice is something that people often ask me for, and I don’t have a lot of it to give.  What I do have is a couple of stories, so here’s another tale for Wall Street Wednesday. 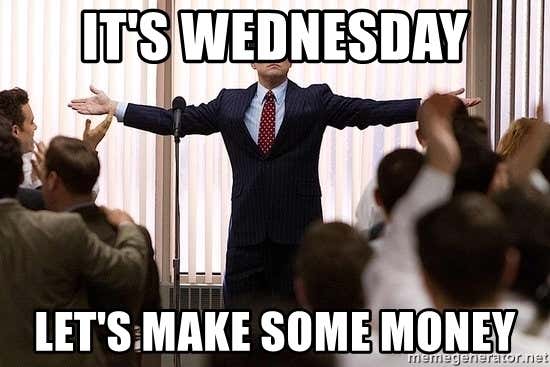 There is a moral to the story at the end (which is kind of like advice), but the morality of that moral is suspect.

When I worked as a specialist clerk on the floor of the AMEX in the mid-90’s, I did a fair amount of business with a man named Ronnie Vivenzio.  I am using Ronnie’s real name here, because I don’t think he would care.  I think Ronnie would be in his 70’s now… Jesus, he might be in his 80’s, now that I think about it.  Either way, his name is his name, and the story isn’t one that should embarrass him at any age.

I believe Ronnie V was a $2 Broker, which, according to Investopedia means someone who oversees trades and executes orders for another broker’s client. A broker might choose to have a two dollar broker do business for him or her because he or she is too busy to take on the work himself. A two dollar broker may also perform orders for a broker who does not have his or her exchange member on the floor.

So $2 Brokers were essentially hired guns, and the floor of the AMEX was littered with them because most of the mid-tier houses did not have floor representation outside of the NYSE.  I recall Ronnie as a $2 guy because he was very generous at Christmas to lowly specialist clerks like me, whereas most of the bulge bracket house brokers weren’t.

I also remember Ronnie as the type of guy who always wore $5,000 suits, $10,000 watches, perfectly styled hair, and had glasses that were too large for his face, even though he had a head like a bull-mastiff.

Anyhoo, we were in a trading crowd once, and I was complaining to a co-worker about a wedding I had in Long Island that weekend.  Ronnie was leaning on the post nearby, just destroying a plate of pasta, and he decided to inject himself into the conversation.

“Long Island wedding, kid?… Let me tell you something about Long Island weddings.”, is how Ronnie started.  He called everyone under the age of 40 “kid,” just so he didn’t have to remember any names.  I do a similar move now, but I call everyone “handsome.”

I’m obviously paraphrasing, but here is how the rest of Ronnie’s story went.  If you can read it using a young Paul Sorvino’s voice, I would appreciate the effort.

“I went to a wedding way-the-fuck-out in Long Island with my family and I got FUCKED up with a couple old buddies from the old neighborhood.  Sometime after midnight, I got back into my car with my wife and 2 kids and drove home so drunk I could barely see.

I was in my brand new jet-black Mercedes S-500 with my wife in the front seat and my 2 kids in the back, and I am cruising down the Southern State, when, all of a sudden, I doze off, and my car veers to the right, bounces off the guard rail, and then goes left and crashes head-on into a divider.

Nobody was wearing seatbelts, and we didn’t have airbags back then, but by the grace of God, nobody was hurt at all.

The cops came, but they didn’t even give me a breathalyzer… Mercedes Roadside Assistance flat-bedded my car to my local dealer, and I called a limo to pick me and the kids up from the police station.”

I am gonna take a break in the story to tell you that I was working as a position trader at CITI maybe 12 years later after I heard this story, right after CITI airlifted in a group of guys from maybe Knight Securities who traded Pink Sheets.

Pink Sheets, for the uninitiated, are essentially penny stocks.  Bulletin board names that are not listed on traditional exchanges and do not have published quotes, or even an accurate trading tape to follow time and sales.  It is more governed now, but back-in-the-day, trading Bulletin Board stocks was the fucking Wild West.  As a result, the best Pink Sheet traders were guys that made both the buyer and the seller in any given transaction feel comfortable while at the same time, fucking both the buyer and the seller of that same transaction right in the ass for the benefit of his (the Pink trader’s) p&l.

So CITI airlifted this group of thieves in from Knight to bolster their own Bulletin Board Desk, and every one of them had the same look… Suits that were 50% rayon/50% chrome, zipperhead haircuts, and deep tans even though it was early February and none of them had ever been on a plane.  They were either Jews pretending to be Italian, or Italians pretending to be Jewish.

One of the junior guys in this new mafia was a young handsome Italian kid named Auggie Vivenzio.  I knew right away his full name was something like Augustino Cesario Vivenzio, and that he had never set foot in an Olive Garden.  When I met Auggie, I immediately brought up how I worked with a gent named Ronnie Vivenzio years ago, and Auggie proudly told me that Ronnie was his dad, which made my fucking day.  Auggie didn’t have half the personality his dad possessed… Nobody did.  But Auggie was a really solid guy and an excellent trader, from what I recall.

Now I am gonna get back to Ronnie’s original story… But we can read the balance knowing that one of the kids that was bounced around the back seat of that S 500 while Ronnie was passed out drunk was my future workmate, Auggie.

“So I am in the back of this limo, sobering up, kid… And I look over at my wife and kids, and I started to cry a little bit, because I was just so thankful that God was looking over us when I made the mistake that night of getting behind the wheel.  And I realized that even though my car was totaled, things coulda been A LOT worse.”

And finally, at the end of the story, Ronnie asked me, “So you know what the point of my story is, kid?”

To which I answered, “I don’t know Mr Vivenzio… Always wear your seatbelt, and don’t drive drunk?”

And Ronnie scoffed, “No!  You fucking idiot.  Driving drunk happens, and who wears a seatbelt when they’re fucking drunk, you mook?!?!”

“No, kid… The moral of this story is this:  When you make yourself a little money, go buy yourself a fucking Mercedes.“

Thanks, Ron… That’s gonna look great on my tombstone someday.