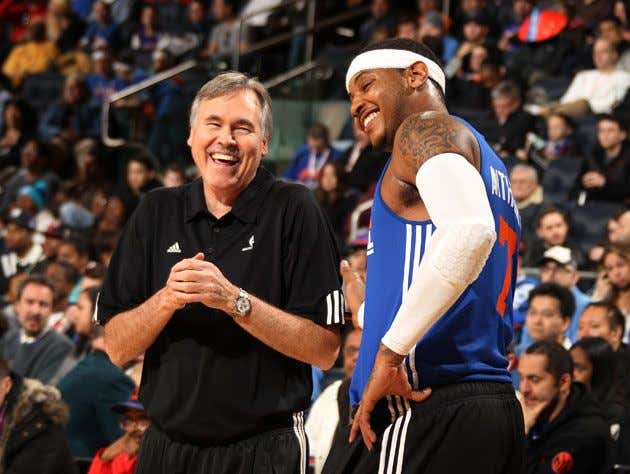 [USA Today] – “Well, at different points of people’s careers or lives or circumstances, things are different. … In New York, when they gave away half the team (to Denver in the February 2011 trade that brought Anthony to the Knicks) and everybody expected us to win a championship, it really wasn’t realistic. It put a lot of pressure on everybody, and it kind of burst the pipes. I think this is totally different. We’ve got a team that is a whole bunch of veterans that really, we’ve got one thing in mind, and that’s to win a championship, and we have the possibility. We never had a blow-up before, so it’s not he wanted to play a certain way and I kind of wanted to coach another way.

“Back then, there wasn’t even analytics. I was going by my gut, and he was going by (his) gut, and it’s just, you know, styles clash. And I think now, things have changed and everybody is playing the same way. I think it’s a lot better fit and I think we have a really good chance to be really good.”

I’m not here to talk about Carmelo’s role with the Rockets, because it’s been talked about quite a bit. I think there’s a better chance it can work than most because I think having Chris Paul there is a major thing. But, D’Antoni does bring up an important factor. The Knicks completely fucked up how they brought in Carmelo. They didn’t have to offer all that they did in order to get him. He was going to sign with the Knicks, it ended up just being a money thing more than anything else.

But, there’s more to the Rockets that needs to be talked about than just the Carmelo signing. Yes, it’s an important piece because Carmelo is a name. But, the Rockets need to figure out what to do with the loses of Ariza and Mbah a Moute. They were important parts as to why the Rockets were actually a good defensive team last year.

That’s where we should be talking about the three rookies the Rockets brought in. De’Anthony Melton, Vincent Edwards and Gary Clark. All 3 are different as Melton is a guard who tends to do all the little things. Edwards is a pretty prolific scorer and versatile offensively. Clark is a versatile defender and a rebounder. Now, will all 3 play major minutes? Most likely not. But, that’s where the Rockets should be looking.

This is where the D’Antoni quote is important and you can read into it if you’re a basketball fan. It’s no lie that Carmelo is a better fit in Houston than New York, especially since he has Harden and Paul around him. It’s going to be one of the most talked about fits this year and heading into it, D’Antoni is at least in the right mindset.