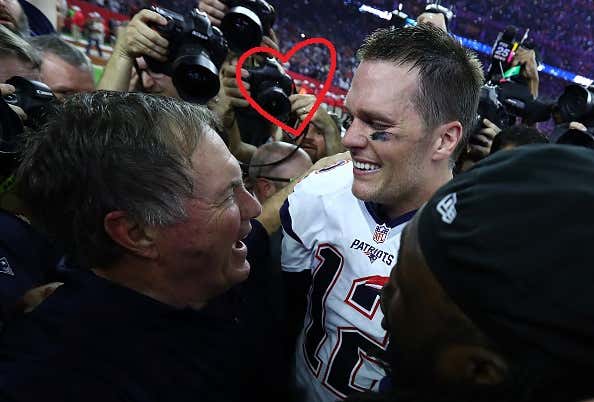 “Look, 19 years is 19 years. Any relationship is going to evolve over that period of time, which ours has. We still do basically the same things we’ve done for quite a period of time now. I don’t see that changing.

“I have a good relationship with Tom. I have a lot of respect for Tom. We’ve won a lot of games together and I hope we can win some more together. I know he feels the same way.”

“I think our priorities are the same as they have always been. I think that is why we get along so well. We’re here to win and like I said, it has been a very professional environment that he has created. I think I am very lucky to be in that environment. I think he is the best coach that has ever coached in the NFL and I feel very privileged to kind of have been mentored by him for as long as I have. Not many players have been able to be coached by the greatest coach of all-time and I have. I think I am very lucky to be able have had that. Hopefully we can go out and have a great season. I know the kind of effort it takes by all of us. … I have so much confidence in him and what his decisions are. They have had a great track record over a long period of time. We’re both expecting to have a great season like we always have.

“I certainly expect to be here next year and hopefully beyond. Like I’ve said, I have goals to play for a long time.”

Annnd scene. OK, are we done here? Are we all set finally? This is it. The end of this church basement group therapy session we’ve been living through for the past eight months. No more sharing our feelings. No more talk about opening up, expressing our emotional intelligence and using The Bachelorette words like vulnerable. We no longer have to have some social worker sitting in a folding chair with his legs crossed like a woman telling Belichick to stand with his back to Brady and then fall backwards to demonstrate he trusts his quarterback will catch him.

In short, no more goddamned talk about Belichick and Brady’s relationship. The Tension. The Rift. That’s done. They’re now in full 2018 season mode, they’ve done every contractually obligated interview and it’s come up in every one of them. So we can move on. As the lawyers say, “asked and answered, Your Honor.”

And guess what? The GOAT of coaching and the GOAT of everything else are not friends. They never have been. They don’t go out for pedis and Cosmos and shopping for shoes. They don’t FaceTime at night so each will be the last face the other sees before he slips off to Dreamland. “You hang up first!” “No, YOU hang up!” isn’t happening. Just like it didn’t happen in 2001, ’03, ’04, ’14 or ’16. One of them coached, the other quarterbacked. They talked and game planned and struck fear in the hearts of lesser men and when they’re opponents were routed, they charged after them and killed all who could not escape. And they will continue to, this year, the next and beyond.

But Belichick and Brady are not baes. They never were. And it’s worked out pretty well so far. So let’s call this whole topic settled science and stop talking, writing or even thinking about it, shall we? Let’s move on to talk about how much friendship say, Mike McCarthy and Aaron Rodgers have. I’d like to hear more about the relationship between John Harbaugh and Joe Flacco. Who’s up for a nice deep dive into the love between Jon Gruden and Derek Carr? I know I am. Because this whole stupid conversation about feelings between the two most ruthless competitors to ever live was ridiculous from the beginning. And no one is happier than me to have it die once and for all.