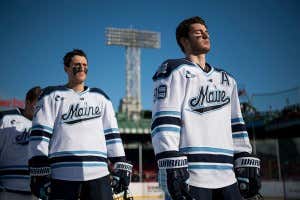 With it being the offseason and there not being much hockey news, I decided to take a look at the best sweaters in all of college hockey. Tons of teams to pick from, ton of teams I left out, but I think I put a pretty good list together. 10 teams, 10 of the best uniforms in all of college puck. 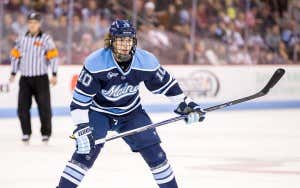 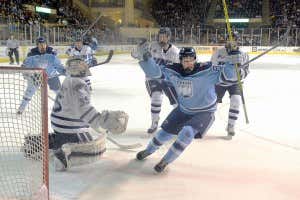 Maine has without a doubt the best jerseys in college hockey. From their color scheme to their jerseys and gloves, everything about the entire uniform works. They remind me a lot of UNC, for obvious reasons, but it’s a color scheme that really isn’t that popular and no one else uses. There definitely isn’t a team in the NHL or D1 that uses it.

Something about these Minnesota jerseys I’ve just always liked. Starts with the color scheme, not a very common one you see amongst sports teams. I mean, with Arizona State coming around , I’m sure we’ll be seeing a lot more of it. But regardless, the classic “M” is great. It’s a symbol of college hockey. And to be honest, they kind of remind of the jerseys from Mystery Alaska, so I have a soft spot for them. The jerseys show both tradition and style and look great on just about anyone. 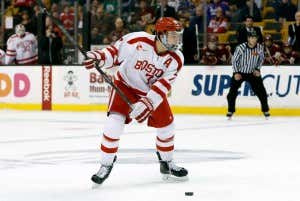 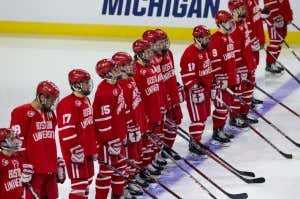 Classic jerseys. Never change much. That’s why I love them. They scream tradition, yet they have a certain amount of swagger to them that makes them almost intimidating. I don’t know, maybe it’s just because so many NHL greats have came through and worn the jersey, but man, these things are beauty. Love the Red they use too, it pops. Wish we saw more all red jerseys. 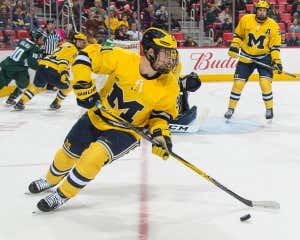 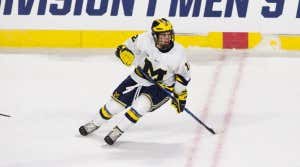 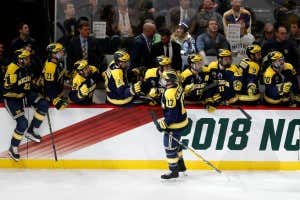 Michigan is mainly about the helmets. No one else in all of hockey does stuff like this. The Wolverine style helmet is unbelievable and brings something to hockey that its lacking, which is creativity. Gotta be honest, the jerseys are pretty cool too though. Not a huge fan of the bright yellows, but the Blue and White’s are great. And Michigan always puts together a crazy jersey for an outdoor game or whatever crazy game they have on their schedule that year.

The Golden buckets. Need I see more? Nothing like it in all of sports.

ASU got some new jerseys for this upcoming season and they are absolutely fire. It seems like they are about to rotate four different color helmets in, basically like Oregon does in Football. And just mismatch all of their helmets, jerseys, and glove combos. Pretty awesome. Excited for the future of this program. Inevitable they join the NCHC and once that happens, recruits will start lining up. You thought ASU was a party school before? Wait until the kids from Western Canada start showing up to parties.

A lot like Minnesota. Same color scheme so I love them. Love the bulldogs logo too. Can’t leave the National champs out. 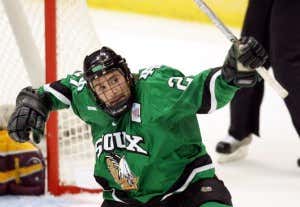 I basically put North Dakota on here because I feel bad. They used to have the best jerseys in all of college hockey when they were the Fighting Sioux. They are decent jerseys now, but wow, back in the day they were unbelievable. They were the craziest material in the world too, like a mix of silk and nylon. It was pure madness but it worked and they were awesome.

Dartmouth kind of flys under the radar because they haven’t really been that competitive lately, despite the yearly upset over a top ranked team. But Dartmouth’s unis are pretty awesome to be honest. Their third jerseys are great. Love the stripes.

The Huskies uniforms are really hit or miss with people. I personally love them, but I can why people may say that or too plain or don’t have much too them. I love the logo on the red jerseys and I think the overall uniform itself just looks really good together.

These are just the first bunch of jerseys that came to my head. I’ll be highlighting team’s uniforms throughout the entire season, especially when teams do throwback jerseys or jerseys for special events. Love when teams do pink jerseys for breast cancer awareness, great to see teams raise money for a good cause.

I’ll even be pointing some d2 and d3 teams jerseys this season. Some of the best jerseys in all of college hockey exist in division 2 and division 3, so stay on the look out and be sure to send anything my way.