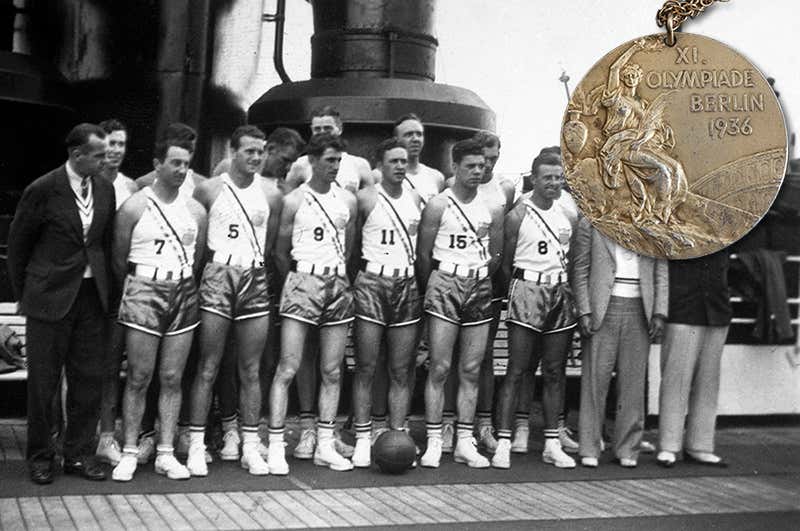 The United States wins the first Gold Medal in Olympic Basketball, beating Canada 19-8 in the championship final in Berlin. The tournament was played outdoors on a converted clay tennis court, causing playing conditions to be sloppy at times. This includes the Gold Medal game which was played in muddy conditions during a rainstorm. The conditions made scoring nearly impossible as the Americans began a Golden dynasty.

The sport of basketball was invented at YMCA in Springfield, Massachusetts by Canadian James Naismith. Naismith remained heavily involved with the sport he invented, campaigning for basketball to become an Olympic Medal sport. Basketball was first introduced at the 1904 Olympics in St. Louis as a demonstration sport with no official medals. The International Basketball Federation (FIBA) was created in 1932, with an eye towards having the first Olympic Basketball competition in Berlin in 1936. James Naismith who was 74-years-old traveled to Berlin for the games and did the opening tip-off for the tournaments first game won by Estonia 34-29 over France.

With basketball, a new sport to most of the world a decision was made for the games to be played outside on a tennis court, with a clay surface. Right from the start, it was clear this was going to cause a mess as dribbling was nearly impossible, even in dry conditions. A total of 25 teams were entered in the tournament, though two pulled out on the eve of the Olympics. In the preliminary round, the United States debuted with a 52-28 win over Estonia, after their first game against after Spain withdrew from the tournament.

Team USA would get a bye into the quarterfinals, easily beating the Philippines 56-23. Canada meanwhile, needed a 27-9 win over Switzerland just to make it to the round of eight, where they defeated Uruguay 41-21. Peru who also earned a bye to the quarterfinals was forced to withdraw allowing Poland a walkover win into the semifinals. Meanwhile, Mexico defeated Italy 34-17 to reach the semifinals where they would face the Americans. In the semifinals Team USA continued to be masters of the court, beating Mexico 25-10, while Canada beat Poland 42-15. 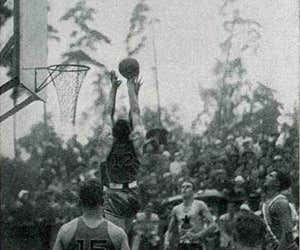 The clay courts in which the tournaments were played were reinforced to prevent wear and tear but a week worth of games took their toll. Making matters worse the championship game was played in steady rain, that made playing nearly impossible as the nearly 1,000 fans viewing the game were forced to stand with no available seating. It had been raining for 24 hours before the final was played, as Mexico beat Poland 24-12 for the Bronze Medal. By the time the United States was ready to take on Canada for Gold, the court was turning into a quagmire. Players were unable to dribble on the muddy court, as scoring was at a minimum. The Americans were able to build a 15-4 lead at the half as Joe Fortenberry was the game’s leading scorer with seven points. In the second half, Team USA focused on protecting the lead and slowed the game down as the rain got even heavier. Just eight points were scored in the final 20 minutes, as both teams scored four points, resulted in a 19-8 win for Team USA.