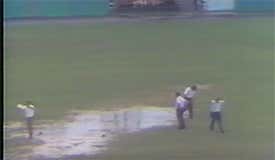 The New York Yankees are left fuming after a 3-0 rain-shortened loss to the Baltimore Orioles at Memorial Stadium. The third game of a four-game weekend series had been halted by rain after the Yankees scored five runs in the seventh inning to take the lead. After 36 minutes, the field was determined to be unplayable and the Yankees’ runs were taken off the board for an Orioles win.

After scuffling much of the season, the New York Yankees were looking like a World Championship team under new manager Bob Lemon. On July 17th the season looked all but over for the defending champions as they sat in fourth place in the American League East with a record of 47-42, trailing the Boston Red Sox by 14 games. Since then the Yankees were 18-6 and were now eight games out of first place while sitting in second place as they played the third game of a weekend series against the Baltimore Orioles who were in third place.

The weekend had been waterlogged as rain played havoc for the first three games. The Yankees won a rain-shortened game on Friday Night 2-1 in six innings as the game had not been able to resume after a two and half hour wait due to the impending American League curfew, mandating no game could continue after 1 AM. The teams battled through several rain delays as the Orioles won 6-4 the following day, setting the stage for Sunday.

The Yankees entered the game with a record of 65-50, while the Orioles managed by Earl Weaver were 62-53. The game was a classic pitcher’s duel for five innings as neither Ed Figueroa nor Scott McGregor allowed a run. Finally, in the sixth the Orioles figured out Figueroa, scoring three runs as Rick Dempsey led off with a double and scored on an error by Chris Chambliss at first. Baltimore would add two more runs and held a 3-0 lead at the end of six innings. The Yankees answered with five runs in the top of the seventh, before the rains came again.

Due to a weekend of rains, and holes in the field left from a Baltimore Colts game the water began to puddle in the outfield. The Orioles ground’s crew did not help matters dumping excess matters dumping excess water from the tarp into the growing pond. This led umpires to declare the field unplayable after just 36 minutes. Since the Orioles as the home team did not get to bat in the seventh, the score reverted to that from the last completed inning, which was 3-0 in favor of the Orioles. The Yankees were understandably upset, arguing they waited the two and a half hours on Friday Night. Adding to the anger was that skies cleared and the field began drying an hour after the game was called a 3-0 win for Baltimore.

The Yankees would play the game under protest, but the American League refused to reverse the decision. The Yankees would win the finale on Monday 4-1, and continued their unprecedented comeback. The rule which angered the Yankees so much would be changed two years, later as the controversy lingered. Starting in 1980 any game in which the visiting team scored before a rain delay and the home team did not have a chance to answer would be considered a suspended game if five or more inning have been played, and resumed the following day or the next time the two teams played each other.