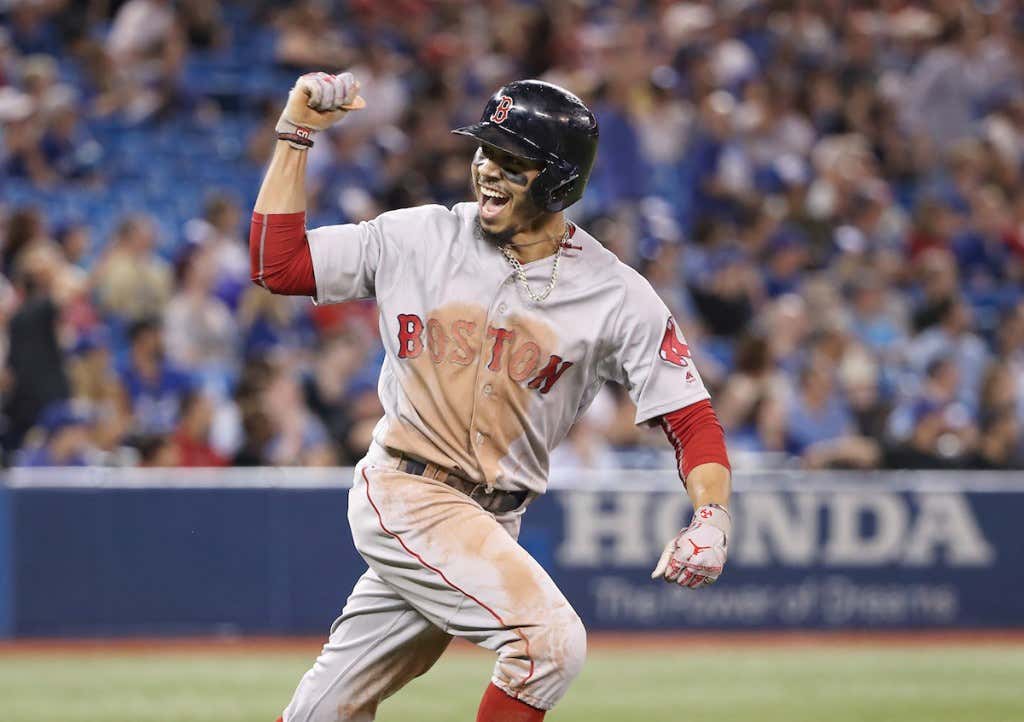 The best thing about Mookie Betts is that someone who has never watched a baseball game before can pick the sport up on any given night and know that he’s a special player without having to ask.

Last night, Betts hit for the cycle for the first time in his career, which was the first cycle by anybody this season. I’ve written many times before that I’m not a big cycle guy, which led to desperate Yankee fans tweeting my own words at me last night like it was some sort of “gotcha” moment. This was in response to tweeting the video of Mookie completing the cycle, like I’m supposed to not even acknowledge that it happened or something. I’m still not a big cycle guy. It’s just kind of a hokey thing. If a guy goes 4-for-5 with two homers and two doubles, we don’t break out the record books for that, even though he had a better night at the plate than the guy who hit for the cycle. It’s just a cool name. The CYCLE!

What made Mookie’s cycle cooler than most, though, was that it was basically a walk-off cycle. Mookie had already singled, doubled, and tripled by the end of the fourth inning, so you knew that he was going to get multiple stabs at completing it. In the ninth inning with a 3-1 count, Ken Giles grooved a 97 MPH fastball right down the middle. Mookie fouled it back and you could see the visible disappointment in his face because he knew he missed his pitch to put on the moon. The next pitch, Giles hung a slider right at the top of the strike zone and Mookie absolutely crushed it.

THAT was an exciting cycle. When a guy needs a single to complete it, and he gets an infield single to finish it off in the eighth inning, who cares? When it’s the ninth inning and you need a home run to complete it, you’re facing the other team’s closer, the batter misses his 3-1 fastball so you think that’s a wrap on Cycle Watch, and then he destroys a 3-2 slider into the seats, then yeah, that’s an exciting baseball moment.

You know what wasn’t exciting? Watching Rick Porcello pitch. I don’t know what it is about the Toronto Blue Jays, but Porcello stinks against them. Like, big time stinks. Porcello has to be doing something that’s tipping his pitches that the Blue Jays have noticed but no other team has, because if Toronto hit as well against everybody else as they do against Porcello, then they wouldn’t be 28 games back of first place.

On Thursday night, Porcello got shelled and gave up seven earned runs on six hits over four innings. Two of those six hits were homers. In four starts against the Blue Jays this year, Porcello has a 9.15 ERA with 20 earned runs allowed in 19.2 innings. In his 20 starts against everybody else, he has a 3.38 ERA with 119 strikeouts in 125 innings.

There’s gotta be something to that, especially since the Blue Jays have a long history of being accused of stealing signs and whatnot. Just doesn’t add up. It’s not like David Price against the Yankees where you can point to the Yankees being a great lineup. The Blue Jays don’t have a terrible offense, but they’re not a holy shit offense, either. Maybe they just have his number? Who knows, but there’s something there and I suppose the Red Sox are lucky that the Blue Jays won’t even remotely sniff the playoffs this year.

JD Martinez hit another home run on Thursday night, but you can just guess that happened the morning after any Red Sox game, and more than likely you’re going to be correct. That’s number 35 for him to lead the majors. Mookie doing that whole cycle thing didn’t help the Triple Crown chase. He’s one RBI shy of a hundred, which leads the majors, and his .331 batting average is just behind Betts’, whose average went up after a 4-hit night to .347.

The Red Sox now head to Baltimore for a weekend series with the Orioles. In game one, you’ve got Nathan Eovaldi against Dylan Bundy. Eovaldi, as you know, has not allowed a run in his first 15 innings over two starts since joining the Red Sox. And despite coming from the Tampa Bay Rays, he’s not yet faced Baltimore this year.

Since the start of July, Bundy has been a big time hit or miss pitcher. Hasn’t really gotten into much of a groove at all. His last time out, he allowed just one run to the Rangers over six innings, but his ERA since the start of July is a very unimpressive 6.75 with the Orioles winning just one of those five starts, and it wasn’t even the one start that he pitched well.