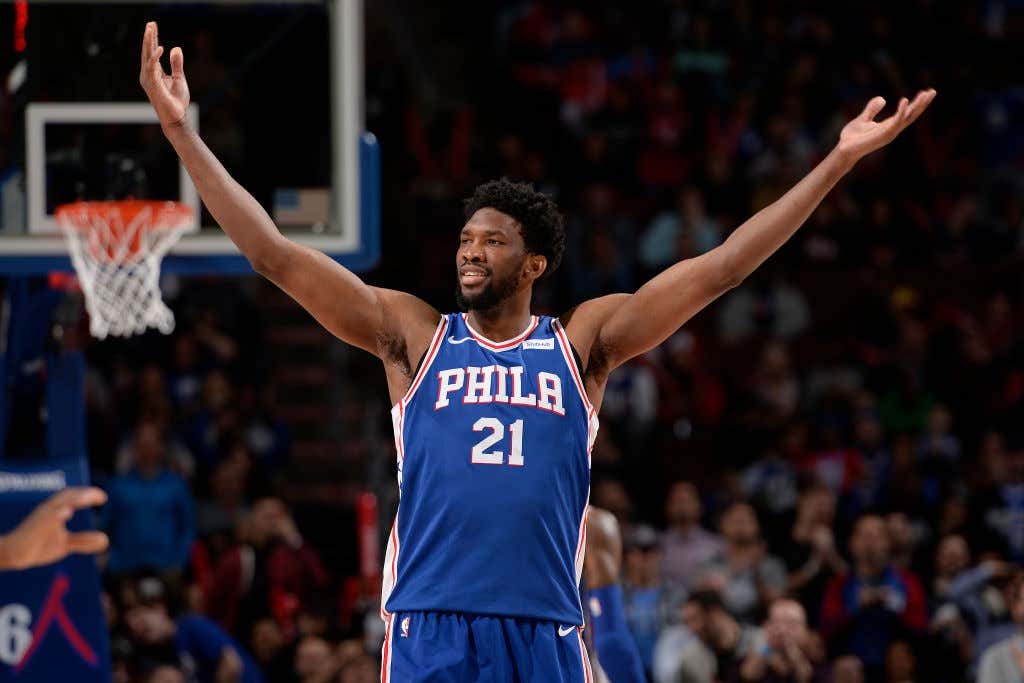 Good morning everybody, happy Friday! We did it, we make it to the end of the week and the weekend is just one short work day away. That’s why I’m here, to help get you started with something that will hopefully take up a chunk of your morning. Let your Monday self worry about all that shit you have to do today, you earned the right to basically do nothing until it’s time to go get some lunch. If I had to guess, you probably have a decent amount of joy today, which is why I wanted to have today’s blog be about someone who for sure displays a great deal of joy whenever he’s on the basketball court.

Now I know what you’re thinking. Why the hell would you want to listen to a Celtics fan talk about the Sixers franchise player? But this blog serves a different purpose than almost any other time I mention a Sixer. This blog is about celebration, and as someone who thoroughly enjoys the game of basketball, a healthy Embiid is something we should all take time to celebrate because he’s a bit of a basketball alien. I mean when Embiid started playing basketball just SEVEN YEARS AGO, he looked like this

Now he’s a certified monster, and a player that only a few in the league can actually handle. And while Sixers fans love to prematurely celebrate, everything they say about Embiid is valid. Even with his injuries in 2016-17, the one thing you cannot deny is whenever Embiid is actually on the floor, he’s one of the best players, period. The good news is he doubled his games played last year at 63, and honestly nothing really took a step back in his production, if anything, he got better. Nobody should raise their nose at 23/11/3 on 48/30% splits while playing 30 minutes a night. Those are legit as fuck. Did you also know that Embiid was 4th in the NBA in blocks and had the 3rd best Drtg and 4th best Net Rating of any Center? His ability to overpower you on the block but also be able to stretch the floor and either hit a three or put the ball on the floor is what makes him such a unique and hard to stop player. Again he’s 23 and has been playing basketball for less time than I’ve been out of college.

Now he’s not perfect, his conditioning is an issue, and sometimes his mouth writes a check his game catch cash, but that’s all part of being young, and if you were honest with yourself that’s a trait that you would want your young franchise player to have. He has all the confidence in the world and is not afraid to talk shit, two things I personally like watching. It also should go without saying he’s by far the best poster in the league on social media. The level of self awareness and ability to joke on himself is what adds another layer to his mass appeal

I’ve said it before and I’ll say it again, I want nothing more than Joel Embiid to remain 100% healthy for the rest of his career. It’s clear he’s a special generational talent with what he’s able to do at his size, and as a basketball fan all I want is to see him play each and every night. A huge reason why the Sixers rebuild is heading in the direction it is, is because Embiid turned out to be as good as everyone hoped if not better. Theres a reason the Sixers made a step forward last year and had the 3rd best team Drtg in the NBA last season, and Embiid is pretty much why. He still has a ways to go in terms of team success, but from an individual standpoint I’m confident in saying that last season’s ALl Star appearance was the first of many to come. Clearly one of the best big men in the entire league, my guess is as long as he’s still in the NBA he’ll be an All Star caliber player.

So Philly fans, basketball fans, Kansas fans, whatever, this blog is for you. I hope it brings you as much joy as Embiid plays with, and as always if there’s a certain player or type of countdown you’d like to see just leave it in the comments below. In the meantime enjoy the video and have yourself a great Friday!