As the markets enjoyed a much-needed breather with the Good Friday holiday, today marks the first day-off for Davey Day Trader and (one of) his newest ventures- DDT Global. 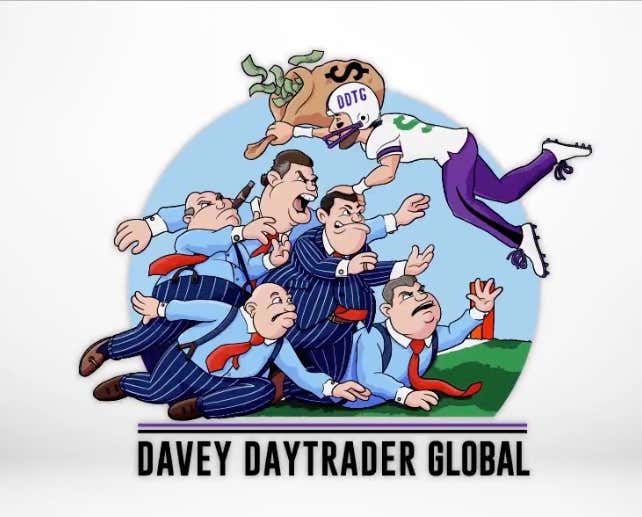 It's been a roller coaster 3 weeks for Dave's p&l, and this week, in particular, his unfamiliarity with trading coupled with his newfound ability to short stocks in a tape that has recovered back into bull market territory has made for some tough sledding.

If you listened to yesterday's show, Dave has turned the quest for ebbs and flows into a good old fashioned street fight vs the Fed and everyone else who has ever worn a pinstripe suit and two-tone dress shirt.

He seems intent on making it all back, and I wouldn't bet against him.

Outside of Dave, my fly-on-the-wall job of hosting Stock Central every day has caused people to reach out to me for my own advice, guidelines, and/or resources.

As I have told my boss and others on numerous occasions, I have no investments to recommend.

I was an Equity Specialist and then Position Trader for most of my career... Never a financial advisor.  And I don't have the skill-set nor the desire to tell people where to invest their hard-earned money.

Since I have not doled out any trading advice, listeners have then asked me what books or websites are best suited to give them a good background into markets, and perhaps teach them how to come up with trading strategies of their own.

Unfortunately for those inquisitive DMers, I don't have a go-to resource for the casual observer.  The shit I did for a living for 25 years was very specific, only moderately profitable, and exclusively learned by being "in the trenches" (a saying that is anything but apropos for a profession that served desk-side rib-eye steaks once a week).

Therefore- I have no books to recommend.

Similarly, a number of followers have asked me if I had any favorite Wall Street movies.

This is BY NO MEANS an apples-to-apples comparison, but I remember asking one of Barstool's resident veterans/heroes a similar question about war movies.

It might have been when 1917 came out... A movie I enjoyed IMMENSELY, but perhaps more for the one-shot camera work by the legendary Roger Deakins than anything else.

Either way, I asked, "Chaps, which Hollywood war movie has the closest portrayal to the culture and struggle that you saw during your service?"

His answer was Jarhead, a movie I saw only once and barely remember.  But I vividly remember the immediacy in which Chaps answered that question.

I don't have any such immediate answer.

In fact, I don't have any answers at all.

Movies like Boiler Room are fun to watch, but I never worked in an atmosphere like that.

The Wolf Of Wall Street was an equally entertaining romp with Margot Robbie at her most Margot Robbiest, but outside of that one time I tried Quaaludes, I don't have a connection to what the story brought.

The classic movie Wall Street might provide the closest parallels for what I witnessed out of my periphery during my time on the curb, but it's essentially what I am sure Sylvester Stallone's vehicle Over The Top is for most of the hard-working men and women on the professional arm-wrestling circuit.

Therefore- I have no movies to recommend.

That's a lot of "No"s to listener questions, so I was trying to find something... anything... that I could give to people in lieu of my total disregard for trading advice, how-to books, or Wall Street movies.

Not long after I started at Barstool in June of 2018, Caleb approached me to do a spread in a coffee table book he was going to put in the company store that Christmas.

I am not sure anyone actually bought that book, but if there is still demand, it is now on sale for 76% (not a typo) off of its original price.

My contribution was a bloated picture of me drinking gin coupled with some words of advice that were supposed to be "evergreen".  When I submitted my list and picture, Caleb was (obviously) blown away with my looks AND writing style and he BEGGED me to not publish my list anywhere for at least a year.

Well… It's been WAAAAY over a year, so for anyone who was asking for some semblance of counsel that barely ties into my experience as a trader, here are…

Large's Top 10 Pearls of Wisdom For Health, Wealth, and Happiness

10. People with money to spare are in such a rush to invest, they often race into positions that are poorly set up.  Take your time when making an investment. Spend the energy it takes to be well informed while your savings sit in an interest-bearing account… Sometimes the easiest way to double your money is to fold it over and put it in your pocket.

9. The best carwashes are in the worst neighborhoods.

8. Oscar Wilde once said, "Anyone who lives within their means suffers from a lack of imagination."  Oscar Wilde died destitute while in exile in Paris at the age of 46.  Fuck Oscar Wilde, and stop spending more than you save.

7. Back up your hard drive, and erase your cookies.

6. If I am out with my wife, I make sure I hold her hand for as long as humanly possible.  It shows her just how much I love her, and it stops her from running off and spending money.

5. Make sure your tailor is British, your accountant is Jewish, your chef is French, your bartender is Irish, and your backup dancer is African-American.

3. The time will come when you need to cut bait on an investment, so sell when you can, and not when you have to.  Sometimes the only way to make money in photography is to sell your camera.

1. If the paying down of your high-interest debt is not your greatest priority, then you are not ready to invest.  You can't build a castle on a foundation of quicksand.

Enjoy the weekend, and rejoice (in a socially distant manner) in the fact that HE has risen, I guess.