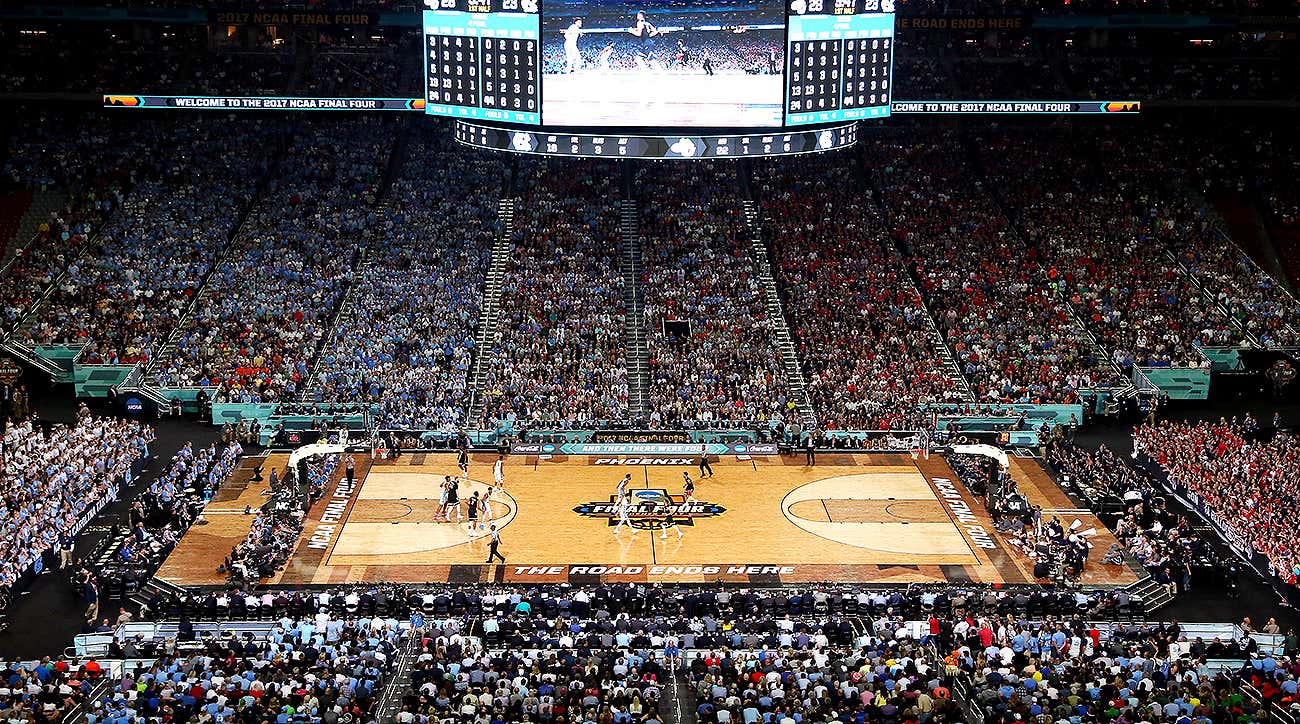 So, the NCAA came out today and announced some major changes to the world of college basketball and I, uh, well, they are changes that almost worked.

Here’s probably the biggest change and it’s one that makes sense, but of course, there are some major questions involved. The NCAA is going to start letting players work with agents (a rule that is far too old). Here’s what they have to say:

I’ve talked about it before but it makes all the sense in the world for college basketball players to work with agents. They are typically dealing with more money than any 18 or 19 year old can imagine in a year and having someone they can work with during the time leading up to that is just helpful for the player. There was never a reason to not let agents in the game.

However, since it’s the NCAA, here’s the problem. It’s only ‘elite’ players. I have no idea what that means, but I’m going to petition my ass off that the NCAA lets PFT decide who is elite so it stays on brand. That’s going to get messy.

USA Basketball is going to define who is an elite senior prospect, but who within USA Basketball is deciding that? What happens if the player is an international prospect like Svi? He was well-known but not part of USA Basketball, how would that come into play here? Also, coaches are involved with USA Basketball, are we giving them the right to determine if their recruits are elite or not? That’s such a huge grey area and the one thing that’s preventing this from being the perfect rule. Just let every college basketball player work with an agent if they want to. What does it matter if the agents are all NCAA certified?

The second thing that people are noticing right away and talking about is the NBA Draft flexibility. Here’s what the NCAA says: 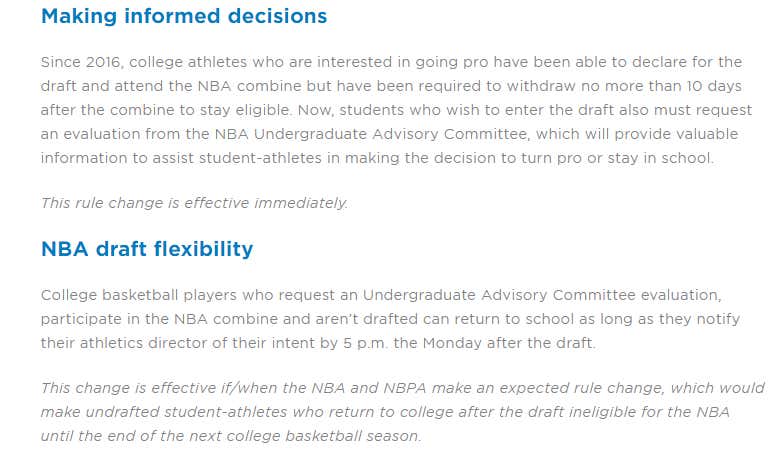 The biggest thing here is the fact that undrafted college players can return back to college as long as they notify the college the Monday following the draft. Now, this is still up in the air as the NBA/NBPA needs to make a rule change and it will be interesting to see what sort of loophole they build in because we’ve seen the rise of undrafted free agents getting 2-way contracts and teams taking chances on those guys. That said, I do like this rule assuming it comes back as stated. I have no problem with a player going through the Draft process, the entire way through. The extra couple of weeks aren’t going to kill a program waiting to see if a player comes back or not plus the extra few days following the Draft lets the player get enough info about 2-way deals or an overseas deal. That’s the important thing here for me, letting the player make an informed decision after all the facts are out. One question I do have is, what happens if a kid wants to come back to school but all the scholarships are used up? Does he have to become a walk on now? Will the school move someone else to a walk on? There’s a lot to be addressed here still.

Another major part of the change:

There is a bunch of stuff in the new changes about harsher penalties and how the NCAA can enforce it but as Norlander points out, this is a major one. It’s already instituted in the NCAA bylaws that the use of outside information can be used for the NCAA. That means the FBI investigation can now hold serious weight against programs. I’ll be honest. I have no idea how this will work because this is the first time we’re seeing something like this. The FBI has more ways to get information than the NCAA, so I guess it makes sense. But, with court hearings coming up soon, this is a serious bylaw to follow.

As I mentioned with harsher penalties, here’s what the NCAA addresses: 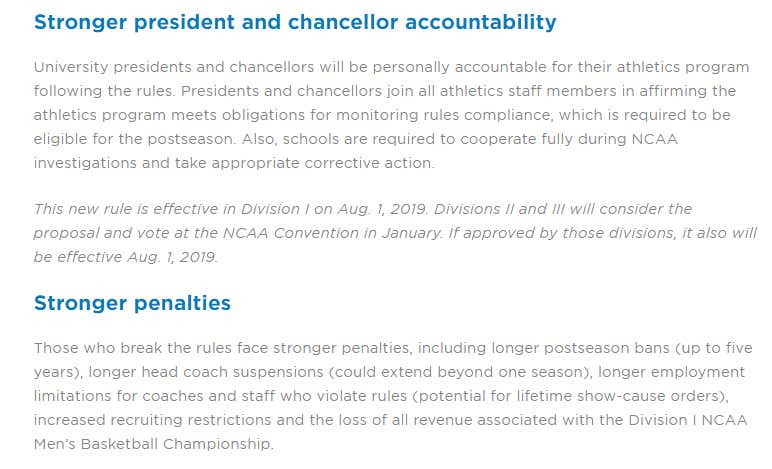 In a year we’re going to see the stronger president and chancellor accountability come into place. Essentially the NCAA is holding those in charge of each university accountable for rules compliance. They are the ones that can take the first fall before we see stronger penalties for teams and coaches.

This is one floating around Twitter now simply because people are talking about how they’ll just use these visits as trips to Miami, Hawaii, UCLA, etc. Yeah, maybe, but at the same time, who cares about how many trips they go on? What if they use one of the visits and ends up fitting in perfectly at say USC? This has no impact on your favorite team, you or anything unless you’re a former prospect where you are salty about not getting the trips.

This is one that Goodman put out and it truly doesn’t make sense. This is used for programs who has coaches out recruiting and uses director of basketball ops, managers, etc., to stay back and help train players. Why would the NCAA prevent that? It’s again development of players. That’s something we should be wanting not holding back.

The one change that’s no surprise and is so dumb that I’ve talked about quite a bit is changing the recruiting period for July and forcing coaches to go to camps instead of AAU tournaments. Again, this isn’t the problem. This is only hurting kids and not helping those who aren’t can’t-miss prospects. Coaches don’t want to go camps. Kids don’t want to go to camps. This is the NCAA pointing blame at the AAU – where it shouldn’t be – and not looking at other rules. This solves nothing and is simply a huge mistake.

While these changes are good in some theories we still aren’t addressing the major issue of the FBI investigation and why all this shit is coming up. The model of amateurism. You’re still not addressing that issue, which is the heart of it all. I’ve said it 100 times now, the NCAA needs to address that. Let these guys make money off of name, likeness and image. It’s that simple with way more complex details to follow. But, take away schools paying the players because of Title IX and let outside people do it. If a booster loses money because the player stinks or it doesn’t sell, that’s on them. But, let these guys make money based off of NLI when they are arguably at their peak marketability. That’s what sucks about this all. It’s very clear as to what the issue is and it’s not being addressed.