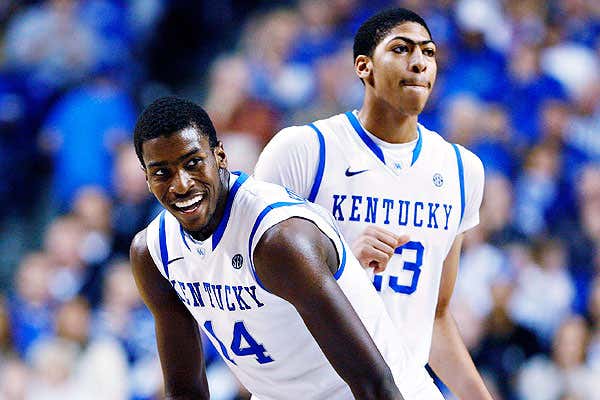 We’re moving on in the August flashback/ranking series today with one-and-dones. We went with four-year careers yesterday, so let’s go the opposite way. One-and-dones have been great for college hoops as we’ve gotten some big time stars coming through even it’s just for a year. We’ve seen teams like Duke, Kentucky and Kansas really go after these guys in recruiting and bring in a handful of one-and-dones. Just a reminder 10 seasons ago is the 2008-09 season. So let’s get into the 10 best one-and-dones during that time.

10 Jabari Parker (Duke)
Jabari Parker was one of the first big name one-and-dones for Duke during this stretch. He was a consensus first team All-American and National Freshman of the Year during his time at Duke. He finished 2nd in ACC Player of the Year voting, losing out to TJ Warren of NC State. Parker averaged 19.1 points and 8.7 rebounds per game during his 35-game career at Duke. Unfortunately for Parker, his career at Duke will be remembered with them losing to Mercer in the first round of the NCAA Tournament.

9. Michael Kidd-Gilchrist (Kentucky)
One of the most beloved one-and-dones at Kentucky, MKG was a bit overshadowed by Anthony Davis but had a hell of a year nonetheless. Kidd-Gilchrist was arguably the wing/perimeter defender in the country that year and if not for Anthony Davis could have been the best defender in the country. He was a consensus Second Team All-American and put up arguably his most memorable performance against Louisville with 24 points and 19 rebounds.

8. D’Angelo Russell (Ohio State)
Russell wasn’t exactly viewed as a one-and-done prospect despite being a five-star coming out of Montverde Academy. However, his one year at Ohio State was enough to turn him into the No. 2 NBA Draft pick. Russell was a consensus First Team All-American while also winning Big 10 Freshman of the Year and the Jerry West Award. Russell became a highlight reel during his one year at Ohio State thanks to his passing as he finished the year averaging 19.3 ppg, 5.7 rpg and 5.0 apg.

7. Lonzo Ball (UCLA)
Yes, it’s easy to make fun of Lonzo Ball because of his raps, his dad or his shot form, but he was damn good at UCLA. He led the nation in assists during his one year at UCLA as well as being the first person in the Pac-12 since Jason Kidd to average 14 points, 7 assists and 6 rebounds per game. Ball was a consensus First Team All-American while also winning the Wayman Tisdale Award for best freshman in the country. Ball also became the first player since 1992-93 to shoot 70% from two and 40% from three. UCLA advanced to the Sweet 16 during Ball’s year in Los Angeles.

6. DeMarcus Cousins (Kentucky)
One of the key members of the first class for Calipari at Kentucky, Cousins was a dominant big man during his year in Lexington. Boogie was a consensus Second Team All-American while also winning SEC Rookie of the Year. His best moment came as his putback against Mississippi State pushed the SEC Tournament final to overtime and a win for Kentucky. Cousins nearly averaged a double-double while at Kentucky, putting up 15.1 ppg and 9.8 rebounds per game.

5. Marvin Bagley (Duke)
One of the most recent players on this draft, Bagley had a ridiculous year this past season at Duke after he reclassified from the class of 2018. He immediately became the offensive focal point for Duke and he lived up to the hype as he set a school record for double-doubles in a season. Bagley was a consensus First Team All-American, ACC Player of the Year and won the Pete Newell Big Man of the Year Award. Bagley 21 points and 11.1 rebounds per game this past season. Duke ended up getting to the Elite Eight before losing to Kansas in overtime after a Grayson Allen jumper rimmed out for the win.

4. John Wall (Kentucky)
The first star that Calipari had at Kentucky was John Wall, who made his name known in his first game as a Wildcat. He hit the game-winning jumper over Miami (Ohio) in Rupp Arena in his first game. Wall was the SEC Player of the Year and a consensus First Team All-American during his one year at Kentucky. The Wildcats lost in the Elite Eight to West Virginia after being a No. 1 seed and a favorite to win the national championship. Wall ended up setting the single-game assist record at Kentucky with 16 against Hartford in a game where he also just had one turnover.

3. Trae Young (Oklahoma)
Regardless of what you think of him now, you can’t knock the season Trae Young had at Oklahoma. He’s the lowest recruit on the list that turned into a one-and-done prospect and became the first player in over 20 years to lead the nation in points and assists. Young tied the NCAA record for assists in a game when he dropped 22 dimes against Northwestern State. Oklahoma was no doubt the worst team on this list as they lost to Rhode Island in the first round of the NCAA Tournament, but from an individual standpoint, it’s hard to beat what Young did.

2. Jahlil Okafor (Duke)
Yes, Jahlil Okafor is trying to stay in the NBA currently, but he was one of the most dominant players while at Duke. Not only did he lead the Blue Devils to a National Championship, but he was in the race for National Player of the Year with our beloved Frank Kaminsky for the majority of the season. Okafor was ACC Player of the Year, consensus First Team All-American and won National Freshman of the Year. Okafor was one of the most efficient players in the country as he shot 66% from the field.