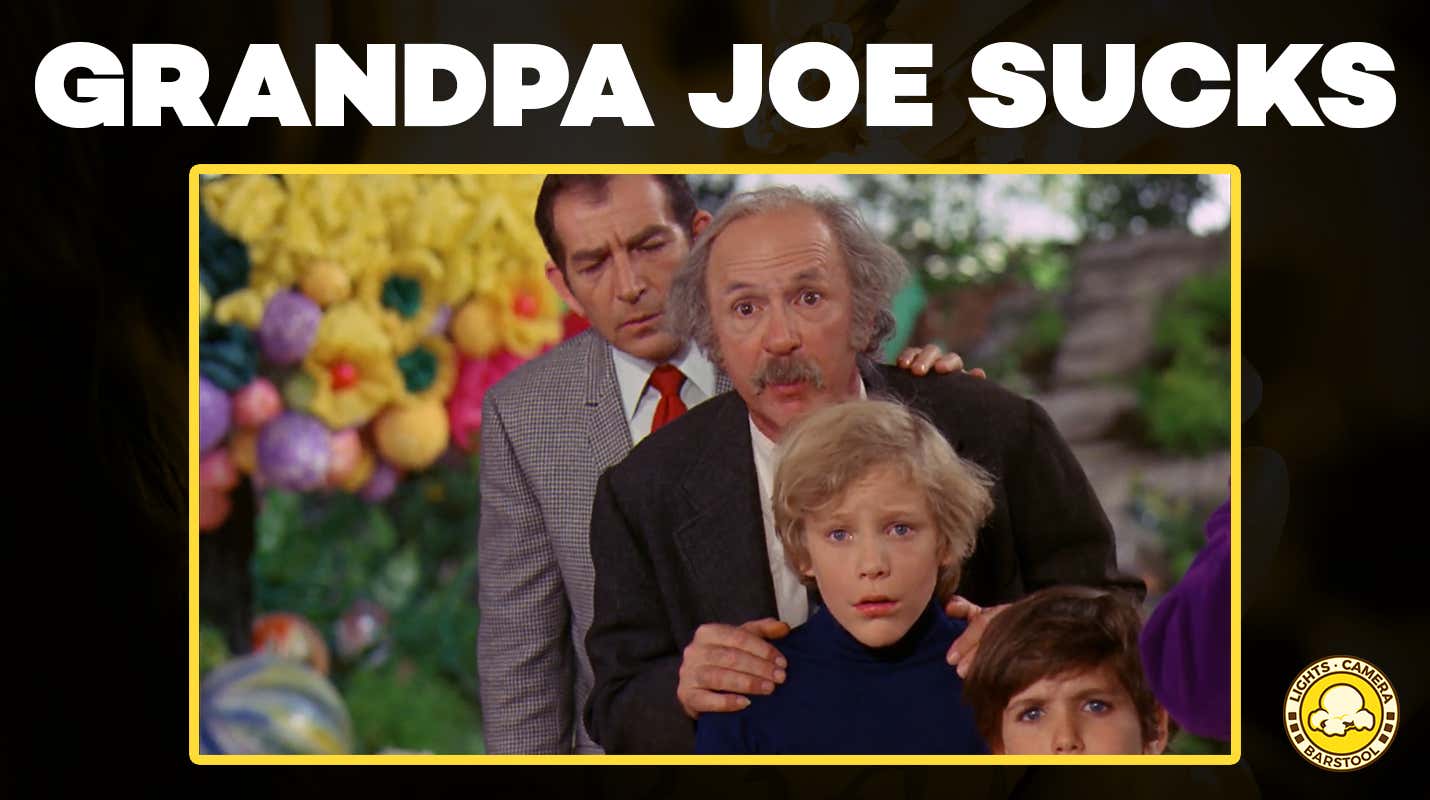 Grandpa Joe is a big heaping pile of trash. I won’t even try and pretend this is an original take, either, because there has been an anti-Grandpa Joe website around for years. I owe a lot of my thoughts and quotes to this website and you should give it a glance. But I felt the need to close the book on my hate for this character and express my own thoughts on why he is the true villain of the movie ‘Willy Wonka and the Chocolate Factory’.

There are a lot of random theories that involve people trying to declare who the “real villain” in a movie is supposed to be (‘Home Alone’ for example), but most of the time they’re a stretch. Not the Grandpa Joe theory, though. Not at all.

Think about this for a second: who is the antagonist in ‘Willy Wonka’? It’s certainly not Slugworth, despite the setup for him being the bad guy. In the end Slugworth was a fake out and actually works with Willy Wonka. You could argue that the other kids are the antagonists, but the counterpoint is that they don’t actually cause any direct issues for Charlie, the protagonist. Sure, they’re all huge piles of shit, but they don’t actually make Charlie’s life difficult or challenge him.

Do you want to know who does cause an obstacle for Charlie? Grandpa Joe, that’s who. Almost all of Charlie’s issues, both before the events of the movie and during them, stem from Grandpa Joe.

This post is not an attack on old people, let me be clear, it’s more of an attack on lazy, selfish people. I’m sure Grandpa Joe isn’t in the best of health, so I cut him a little bit of slack. The house they live in is basically a couple of rickety boards tossed together with cold floors and no heat. Grandpa Joe actually says “maybe if the floor wasn’t so cold” he would possibly get out of bed.

The conditions aren’t ideal, but guess what? Had this fucking hack not been in bed for 20 years, maybe he could have gotten a job or done something to make money and help improve the family’s living situation. Charlie has no problem trying to help out his family and basically sleeps outside. (I know this is from the crappy remake, but it’s all the same when it comes to the Bucket’s living conditions).

Look at that shit. Imagine sitting sleeping in front of that giant opening in the roof, with cold weather, a shit blanket and a rusty cot on top of a door, all while Grandpa Joe complains about the flooring while sitting in his California King sized bed with superior blankets.

Selfishness from Grandpa Joe is evident and doesn’t need much more of an explanation. Bottom line, he sat on his smelly ass for 20 years complaining and making Mrs. Bucket struggle with her low-paying laundry job to support five other family members.

The SayNoToGrandpaJoe.com website also notes that, in the book and the newer Tim Burton movie, Grandpa Joe used to work for Willy Wonka and seems to know an awful lot about the company. Could he have been a spy? Could he have been the reason Willy Wonka originally shut the public out of his factory? It’s a bit of a stretch, but this asshat is certainly not above such a heinous act.

There’s no doubt in my mind that Grandpa Joe shits his pants, by the way. He hasn’t gotten out of bed in 20 years. Unless Charlie is holding a poop bucket on the side of the bed, Mrs. Bucket is washing poop sheets a few times a week. Not to mention, they surely have to sponge bathe this fraud as well.

GRANDPA JOE SUCKED DURING THE EVENTS OF THE MOVIE

The list of shit Grandpa Joe tries to pull during the movie is insane. He gets Charlie’s hopes up a lot, which is pretty dumb to do considering he’s a poor, struggling young kid and the odds of getting a golden ticket are astronomically low. On top of that, the old wrinkly fuck mentions how he will help Charlie, a 12-year-old with a job mind you, once he gets his strength back. We will remember this comment later on. His worst early moment is right here, though…

You bought him a candy bar!? Your family needs real food, you old prick. They don’t even eat the chocolate, it’s just a straight up waste of money. This isn’t even the worst part, because at least there was some kindness behind the act of getting Charlie the chocolate bar. The worst part is that the money for Grandpa Joe was originally meant to be for him to buy tobacco. Do you really need tobacco that badly where you’d waste the family’s money when it could be used for actual food, instead of cabbage water that was cooked in the laundry water?

That is disgusting, plain and simple. When Charlie brings the family bread, they call it a banquet. How is this not a wakeup call for Grandpa Joe to grow a pair, stand up and help the family?

We now arrive at the absolute worst and most egregious thing Grandpa Joe does in the entire movie: standing up.

Are you fucking kidding me with this shit? Anyone in bed for 20 years who hasn’t moved a muscle in their legs would never be able to walk, let alone dance as if he is on Broadway, that quickly. If you sit on the toilet too long you lose feeling in your legs and can barely stand up. As many people have noted, Jim Rome, SNL, John Mulaney, and more, the fact that he just stands up should enrage the family.

Remember the comment we mentioned earlier from Grandpa Joe about helping the family once he gains his strength? That didn’t age well. What a miracle! He was able to stand up and dance the second his freeloading ass was given the opportunity to experience an event filled with food and comfortable living conditions. He’s also singing the lyrics “I’ve got a Golden Ticket” while dancing. No, Grandpa Joe, that’s Charlie’s ticket, who the hell do you think you are dude?

I could sit here all day and type out the stuff Grandpa Joe does while in the Chocolate Factory. He is nasty to the kids, which is somewhat warranted but they don’t affect Grandpa Joe, just Willy Wonka. I’m also pretty sure he wishes bad things upon all of the other kids. I can’t go without mentioning that many people have said that Grandpa Joe is a pervert.

The Grandpa Joe website lays out a few more of his perverted moments, but he should’ve been booted from the Chocolate Factory for getting too close to Mrs. Teavee.

There are two big things Grandpa Joe does in the Chocolate Factory that prove he is the villain: him willingly breaking the rules and then threatening to screw over Willy Wonka.

Great way to teach Charlie a lesson, Joe, nothing like showing him how to steal, break the rules and waste more of other people’s money. Also, hey Joe, way to almost kill your grandson.

After shaming all of the other kids and their parents, Grandpa Joe waltzes into Willy Wonka’s office as if he did nothing wrong at all. My man, you are a thief and directly violated the rules in the contract that Charlie signed. You lose, good day sir!

Nice comment there at the end by Grandpa Joe, basically blackmailing and threatening Willy Wonka. Another great lesson for Charlie and example as to why you’re a scumbag. You want to get even with somebody that had every reason to be mad at you and kick you out of his place of work? Whatever you say, Joe.

Luckily, Charlie doesn’t learn too many bad lessons from Grandpa Joe, because he finally does the right thing and returns the Everlasting Gobstopper to Willy Wonka. Good for the kid who deserves something nice after enduring cold weather, being poor and a severe lack of food. No way Grandpa Joe can ruin this great moment, right? Wrong.

“What about me!?” The balls on this guy to immediately ask if his coat tail riding dumb face can move into a Chocolate Factory that he doesn’t deserve to live in. He doesn’t congratulate Charlie or ask about his daughter, who struggles with her hand-wash laundry business every day just so Grandpa Joe can pack his pipe.

From start to finish Grandpa Joe put on a show that only a true villain could pull off. While he may not be as true a villain like Darth Vader or Hans Gruber, he is for sure the best candidate for the antagonist in ‘Willy Wonka and the Chocolate Factory’.

Get fucked, Grandpa Joe, you stink.

On an episode of Lights, Camera, Barstool, Trillballins noted that the candy store owner is also kind of a piece of shit. He just tosses free candy at all of the kids in his shop during the “Candyman Man” scene but makes Charlie pay for every piece of chocolate he comes into the store to buy. That’s pretty cruel, candy store owner.

NOTE: Thank you to SayNoToGrandpaJoe.com for supplying a lot of the content and many quotes from their hilarious website.

—
Per usual, make sure to follow us on Twitter, Instagram and subscribe to the Lights, Camera, Barstool podcast by clicking all of these links. We will update for Final Four voting after Elite Eight voting is complete.