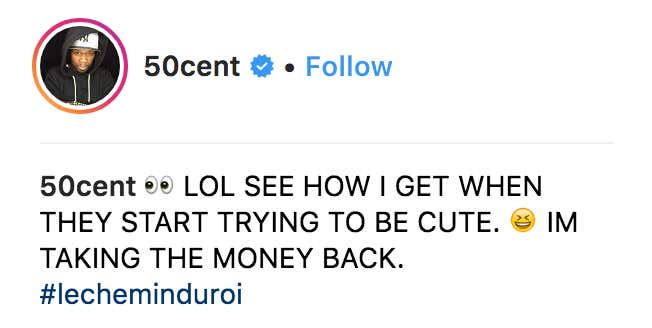 NYP- A gallant 50 Cent heroically stepped in to prevent a stripper fight over the weekend, we’re told. Scantily clad sources tell Page Six that after spending the evening showering the topless ladies at Angels jiggle joint in Flushing, with singles, the rapper was spotted scooping up armfuls of cash from the stage and redistributing the money so that everyone got a share of his largesse. “He took the money from the strippers’ dance floor and moved it to the bartenders because the dancers were trying to fight the bartenders over him,” said an insider. While some onlookers mistakenly thought the “In Da Club” singer was taking back the cash he had lavished on the dancers (not helped by the fact that Fiddy himself joked online that he was helping himself to a refund), we’re told, “He just moved it because they were trying to fight over him and his money.”

Not all heroes wear capes. Sure, that video 0f 50 Cent doesn’t look great on the face of it. It looks like he’s taking money back from hard working strippers but that’s not the case once you add context to it. That’s the story of 2018, really. There always needs to be context otherwise people would just assume 50 Cent was being an asshole by taking back that money when he was really being a saint, a moderator and gentleman. In fact, give the man a Nobel Peace Prize. He stopped an all out war between strippers and bartenders. As Adam ‘Pacman’ Jones has taught us in the past, things can get outta hand REAL quick when people start taking the money back at the strip club. Luckily 50 Cent handled the situation with honor and grace. What a guy.

You know who wouldn’t split the money between strippers and bartenders? Floyd Mayweather Jr. If he can’t read I very much doubt he can look at thousands of dollar bills, quickly do the mental math and split it evenly. Score another point for Curtis Jackson.

PS- All due respect to bartenders but shouldn’t strippers make more money than them? I’m out of my depth but it sure seems like the employees who take their clothes off and pop their pussies in front of Tony Yayo should get a bigger piece of the pie. That’s all I’m saying.