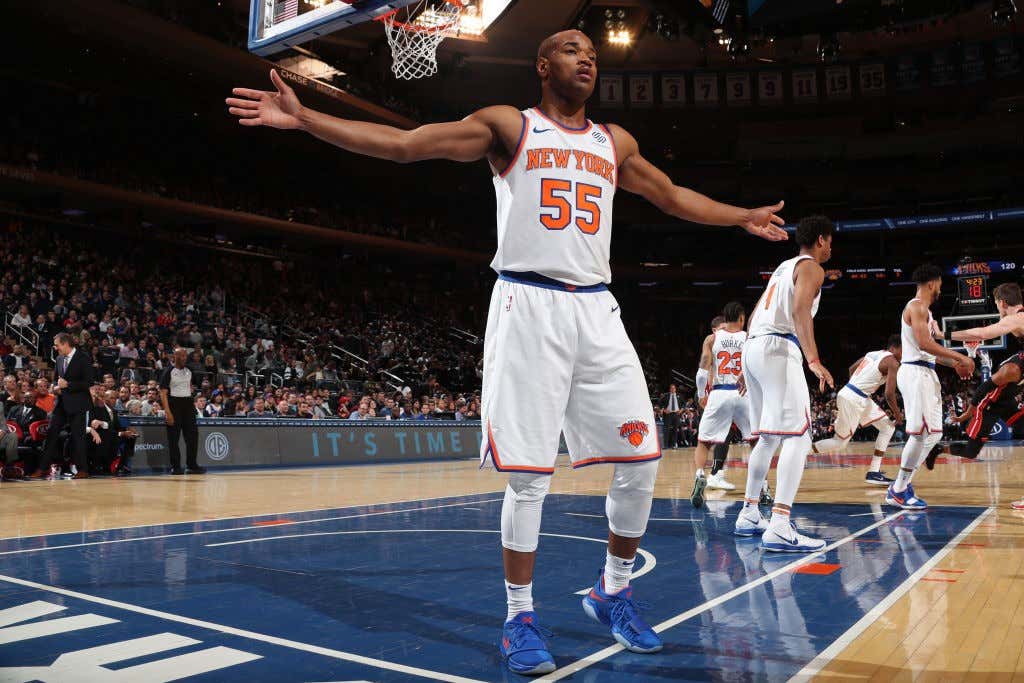 At this point in the NBA calendar and free agency in particular, the major Woj/Shams bomb have dropped. I suppose the Melo to Rockets announcement isn’t “official” but it may as well be so looking around at who the hell is even left and if they could even help a team with a roster spot open isn’t exactly pretty. But that doesn’t mean there aren’t some warm bodies out there currently on the open market that you have to think end up on a team at some point before training camp opens relatively soon. Remember when it comes to the regular season that’s where a team’s depth really shows up, and with how tight both conferences are expected to be, there’s always some random asshole that a team got for cheap that plays way above his contract and is a difference maker to some degree.

At just 30 years old, Trevor Booker is one of those high energy glue guys that pretty much almost any team can use. He played for three teams last season but don’t let that make you think he wasn’t half bad. As a Net, Booker put up a respectable 10/6 on 51% shooting, and when PHI traded Jahlil Okafor and Booker was included, eventually the Sixers moved on so they could add more shooting so I don’t consider it a knock on him that he got released. If you’re a team that’s looking for big man depth and want a guy who will go out, body people on the offensive glass and will play with great energy, Booker will probably be a low cost option. Definite candidate for a guy who would outplay his contract

I would say don’t expect a whole lot, but if you’re a team looking for end of the bench wing depth, you could certainly take a chance that Brewer would be more like his OKC version (10.1/2.4/1.3 on 44/34%) than his Lakers version which was essentially a disaster. He played 28 minutes a night in OKC, so even at 32 he still is showing that he can play, and you know what they say you can’t teach length and as a backup wing at this point in the summer you could do worse.

If I had to choose a guy that surprised me the most that they remain unsigned, it’s Jamal Crawford without a doubt. I know he’s 38, I know he’s not the most efficient guard in the league, but the facts are the dude is still a microwave. He can go out there on your second unit and have a 2-3 minute stretch where he scores like 6-8 quick points until your starters are ready to get back in. I know people hate on those who join the Warriors, but I’m going to allow it for Jamal Crawford. I’m be down to see him get a green light on that team if only for the reactions we would get in Oracle. Add in that he’s from the Pacific Northwest it would be cool to see him play close to home. Same for Portland too.

I’ve been a huge Jack guy since the days of watching him play at Worcester Academy. To think that kid would have a 13 year NBA career is crazy, so I’m all for seeing him keep it going. There has to be a team out there that needs a backup veteran point guard. There just has to be.

Iso Joe say it ain’t so! After 17 years is it true Joe Johnson doesn’t have a team right now? That just feels wrong. I’m not sure people even remember his stint with the Rockets after being bought out by the Jazz, and his efficiency for sure isn’t what it once was, but for some reason when I think of guys that can go out and get you a bucket when you need it, Joe Johnson makes that list. Johnson to this day can still give you 20 minutes and he has now transitioned into that old man rec league type game where you won’t know how he’s doing it, but he’ll carry a team for a stretch or two. I will always have love for the Celtics legend, and I’m not ready to say goodbye just yet.

At this point Monroe is probably the best available big man on the market. I’m sure he’d tell you this hasn’t exactly been the most ideal summer, as he was probably wishing that Brad Stevens magic would have helped him land on a team by now. To be hones the wasn’t all that bad in his 26 games as a Celtic, I mean there were definitely moments where his defense made you want to gouge your eyes out, but for what he was, a moose down low who was a decent offensive player and offensive rebounder, if you have that need on your roster right now you could do a lot worse.

Monroe’s issue is he doesn’t really stretch the floor, so he would work best where you can add him to a team of shooters so he can have space to go one on one on the block. I don’t think he’s a starting big anymore in today’s NBA, but he’s certainly serviceable.

Muhammed is an interesting player in my opinion. He flashed some potential early in his MIN career, but ultimately never panned out and was moved to MIL where things didn’t look all that great either. But he’s only 25, and is a career 9 point scorer on 47% shooting. Obviously we’re hearing how he’s in the best shape of his life this summer and who knows how true that is, but if you’re a team that can afford and end of roster spot for potential wing depth, why not take the risk? The two situations he’s coming from in MIN/MIL aren’t exactly model franchises right now, and sometimes a player just needs to find the right situation for him the flourish. Maybe that’s all this is with Muhammed and he’s another guy who could ultimately outplay his deal.

Man, so crazy he got out of PHI and things didn’t work out huh? Well, that’s OK because Okafor is ready to take that leap!

Is West coming back to GS? Have we heard news on that and maybe I’ve missed it? I thought I heard he wasn’t coming back and is on the market but not retiring. If that’s the case, I’d still kick the tires, if only for the championship presence it would bring to the locker room. He did play in 73 games last season and shot 57%, so even at 37 I wouldn’t say West doesn’t have anything left in the tank. I would understand if he just retired, but if I’m a young team that needs big help, I make the call

To me this is mostly down to Wade either retiring, or going back to play in MIA. I don’t think he’s going to take that money in China so really if you’re a different team you probably aren’t even kicking the tires. Wade is one of those guys that may have looked washed in CLE but found new life in MIA, and hey at the end of the day he still puts asses in the seats. Especially coming off the playoff performance he had last year.

Sorry, that’s NBA Champion Nick Young. To be honest, Young may not even realize he doesn’t have a team right now. I would expect he’s still rightfully celebrating his NBA championship and has no clue what month we’re in let alone know if he’s employed or not. I find it highly unlikely that Young is done playing in the NBA, so it’s just a matter of time before a team realizes they need outside shooting and they bring him in. To be honest he would be perfect for the Lakers had that not happened already. With that band of misfits over there, you can’t tell me that team needs Nick Young back.