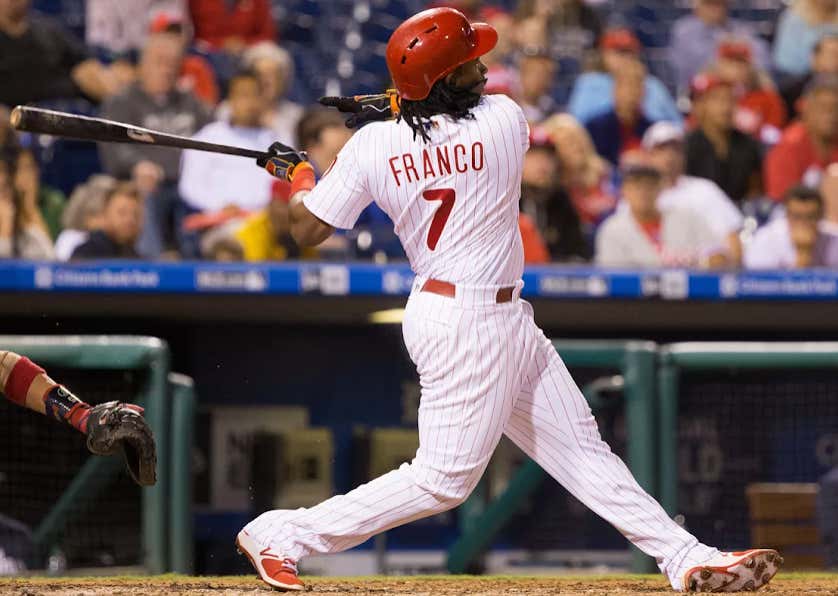 Seriously, Machado who? For those of us still butt hurt about missing out on Manny Mach, then hopefully that walk off blast by Maikel was your Preperation H.

I was dead asleep in my 5th floor Air BnB in Hampstead, London. Apparently, air conditioning hasn’t made it to this side of the pond yet. It was like fate when I woke up at 3am local time in a pool of my own sweat to a runner on 1st and 1 out in the bottom of the 9th.

I check the box score and of course our only run at that point was manufactored by the one, the only, Rhys Hoskins. Allow me pivot to him for a second before returning to Maikel.

My lord did he smoke that ball. That makes it 22 HR now on the season and with that blast, Rhys raised his OPS on the season to .899. Rhys is now 7th in the NL in OPS and 8th in HR. Since coming off the DL on June 9th with a fractured jaw, Rhys has the 5th highest OPS in baseball with a 1.016. He has the 2nd most HR with 16 and the 2nd most XBH with 29. At this point, it is really hard not to include Rhys’ name in the MVP conversation.

One more pivot to Nick Pivetta, Austin Davis and Tommy Hunter, before we return to our main attraction.

That’s more like it Nick. In his previous 6 appearances before last night, Pivetta had an ERA of 7.71 with an OPS against of .937 and a BABIP of .410. While the K/9 remained high, there was a lot of barreling going on. Pivetta’s last start in which he K’d 12 batters in 6 innings of work was enough confidence for the Front Office to stay stagnant in acquiring Starting Pitching help at the deadline. I’m sure Nick made a lot of rich dude’s in the deluxe suite very happy last night.

It was another solid outing for Austin Davis, who gave the Phils two quality innings and keeping the game within reach. But how about Tommy Hunter. Congrats to us Phillies fans, I think we are now past the point of hating Tommy.

It is my pleasure to report that we no longer have to hate Tommy Hunter. Tommy boy has lowered his ERA .81 points since June 28th. Happy to have you back, Tom. https://t.co/Sp5b8H5UV2

Back to Maikel. So here I am drenched in sweat in a double bed in London. I got my phone in one hand and I’m ringing my briefs out in the other. Carlos Santana hits a $20 million a year cue shot single, Asdrubal walks and Nick Williams ties the game on another cue shot ground out. In steps to the plate the stylin’, profilin’, limousine ridin’, jet flyin’, kiss-stealin’, wheelin’ n’ dealin’ son of a gun, Maikel Franco!

Before the Nick Williams ground out, Kyle Barraclough threw him two hanging breaking pitches that Nick must have been screaming at himself in the dugout for not murdering. Sure enough, on a 2-0 count, Maikel get’s the same pitch and the rest is history. Once again, props to me for bringing out the best in Maikel.

You know Luke after last night, I think it’s my destiny. My work with Maikel over the past few years hasn’t been easy. We have had our ups and downs, but like they say, success is no accident.

After the home run, Maikel had the bat flip heard round’ the world.

New favorite gif of all time, give me your best caption? #walkoffsarefun pic.twitter.com/0CWtbsmfoI

But is this the greatest walk off celebration in Phillies history? In my opinion, the Pat Burrell point to the dugout after walking off the Braves in 2002 is the greatest.

What is the greatest Walk-Off Celebration in Phillies history?