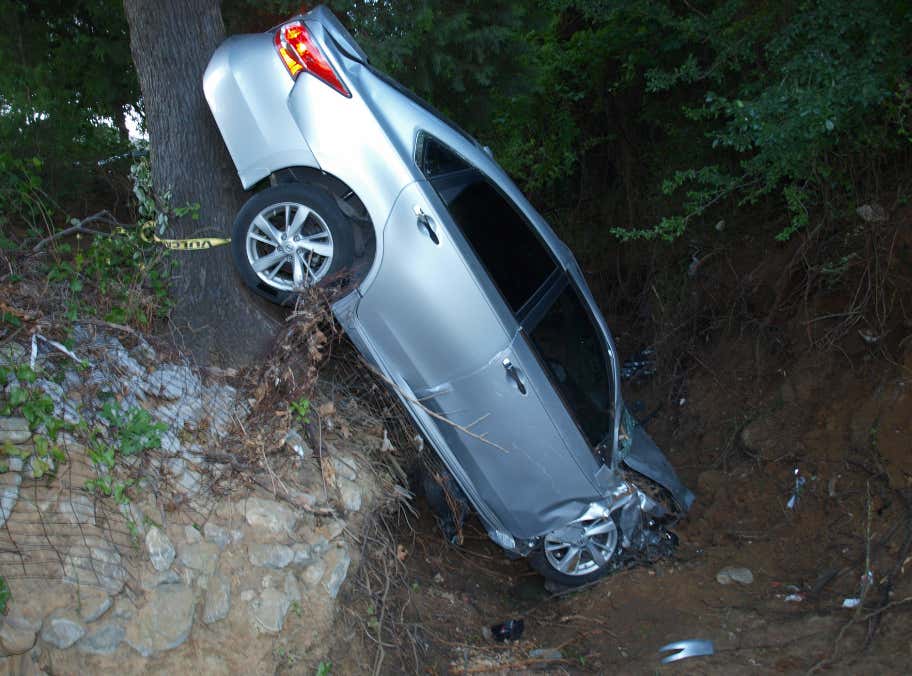 Bloomberg- It’s not Super Bowl Sunday or even New Year’s Eve that makes for the most lethal day on U.S. highways. It’s Aug. 2.

Thursday is when, on average, car wrecks are likely to kill more Americans than any other day of the year, according to the Insurance Institute for Highway Safety, which based its calculations on fatalities from 2012 to 2016. A total of 505 people were killed on that day during the period.

Since the culprit isn’t icy roads or drunken revelers, what makes that seemingly random date on the calendar so lethal? Sunny skies and vacation travelers, the same reasons the month of August is also one of the deadliest, says Becca Weast, a research scientist at IIHS.

“In the summer, the weather is nice, sunny, and people just are a little more reckless, they’re a little less careful,” Weast said. When the weather is bad or there are other obvious risks that make driving more difficult, “people tend to be a little bit more on guard or more careful,” she said. 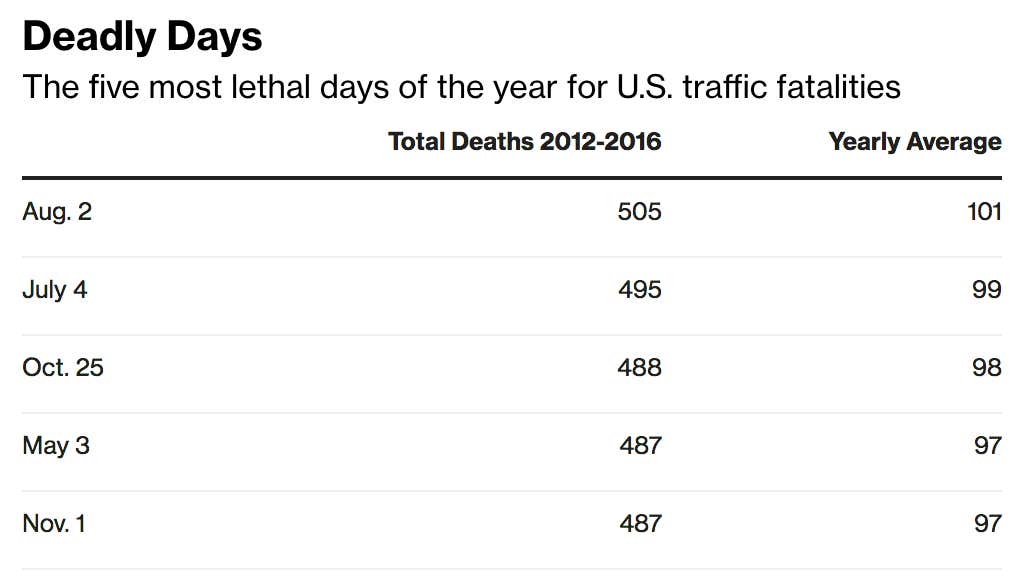 It’s morning in America. Children are strapping on their shin guards and hopping out of minivans to run to soccer camp with their sandwiches and juice tucked lovingly alongside the powder blue cooling pack in their igloo cooler; fathers are hoisting up bike spandex and clipping in to their new 21-speed, 6 ounce bikes, leaving the car in the driveway to bike to work; mothers are running businesses and/or taking a spa day after dropping the kids off at soccer camp. All seems right in the world as the United States of America enjoys this final month of summer, knowing that a glorious fall awaits, knowing that our economy is booming, knowing that the frequency of celebrities being outed for sexual misconduct has slowed to a trickle.

Against that backdrop, the visionary female CEO of a wind farm company, late for work due to the kids, applies her eye-liner in the rearview mirror as she drives. Marissa wears minimal makeup and doesn’t fuss too much over coloring within the lines. On the radio, the BBC offers global market projections through the lilting cadence of a British baritone. Marissa flits her eyes between the road and the mirror as she hums along in the right lane. The roads are dense but the traffic is moving well.

Meanwhile, her husband Tom has worked up a full lather as he speeds along, hunched over the handlebars, looking forward to a hot shower at the clinic. He’s an orthopedic surgeon specializing in hip replacements, which are all the rage these days. The technology is progressing at a startling pace and ecstatic patients express their gratitude with vintage wines and offers of weekend stays ski houses in Tahoe. Come ski season, Tom and Marissa will take the kids up to a palatial cabin, free of charge thanks to his brilliant handiwork, thanks to his focus at Georgetown Medical, thanks to his relentless preparation for the MCAT. He smiles but keeps his lips closed to prevent bugs from flying into his teeth as the rust-red spires of the Golden Gate come into view.

At the same time, a drifter named Sam stands in the walkway at the center of the bridge. He knows the statistics: the San Francisco Coast Guard spends more money each year on body bags than boat fuel. They fish corpse after corpse out of the freezing, swirling waters under the bridge. Kite surfers and wind surfers brave the shifting currents and gusting winds for sport, whipping around the jagged rocks of Alcatraz Island and jumping the wakes of ferry boats from Sausalito and Marin County. But the forgotten and the damned simply know the water as the portal to the afterlife. Sam once read that when a body enters water at 60% of terminal velocity, the surface feels like cement. With that in mind, he takes a deep breath and hoists himself onto the railing. Immediately, a crowd of tourists steps back. The Asians position their selfie sticks, thinking a base jumper is readying for a stunt. And yet he wears no harness, no parachute pack, no helmet. He is simply a man in a ratty t-shirt, with nothing to lose except his pulse.

Had the kids not dawdled in the kitchen, chewing their pancakes as slowly as possible to ward off the morning ball-skills portion of camp; had Tom not spent that extra minute inflating his front tire to the perfect PSI; had Sam’s scratch ticket revealed the symbols he needed to win $25,000/week for life; had any one of those things gone differently, then perhaps it wouldn’t have happened.

Instead, Marissa’s van and Tom’s bike arrive at the center of the bridge just as Sam closes his eyes and steps off the railing. Out of the corner of her eye, she catches the commotion and turns her head just in time to watch gravity take control of his body. She reaches out with her hand and whispers “no,” as if to catch him with a spell. This motion causes her to turn the wheel ever so slightly with her other hand, which sends the car drifting into the bike lane where Tom is also watching the scene unfold. Because he’s looking right, he doesn’t see his wife’s van closing the distance. At the last second, he spins his head back to the road and for an instant, he and his wife lock eyes. Their recognition is pierced by a bolt of fear. She rips the wheel back to the left, overcorrecting and sending the top-heavy van into oncoming traffic. A Kia Soul, Car and Driver’s 2018 subcompact SUV of the year, glances off the van’s right fender and spins left, t-boning Tom on his tin can bike. The bike crumples like an origami swan. Due to Tom’s lean body mass, he sails through the air like a kite, over the still-raised selfie sticks of the Korean tourists, following Suicidal Sam over the railing. Across the bridge, Marissa’s car is completely out of control and she collides head-on with a produce truck carrying crates of local, organic carrots and snapped peas. A child of divorce, Marissa never wore a seatbelt as a small act of rebellion against her parents. She maintains this habit today, and consequently, she sails through the windshield like a circus dwarf shot from a cannon. Somehow, her trajectory sends her skidding through the bed of the produce truck, but the momentum is too great for the carrots and peas to stop her, and she flies off her side of the bridge.

One after another, Sam, Tom, and Marissa fall to the bay below. Marissa lands twenty yards from her husband, but due to her collision with the vegetables, she’s covered in wounds that bloom like mushroom clouds in the water. It’s mating season for the Great Whites that circle outside the bay. They rarely swim under the bridge unless someone rings the brunch bell. In they come, racing towards a three-course feast. Sadly, they leave Sam alone because he’s full of PCP and rotting from the inside. But the other two provide some of the leanest, cleanest protein they’ve had in weeks. Within minutes, the tattered bones of Marissa and Tom sink to the silty floor of the bay, nestling on top of each other like pickup sticks. That afternoon, no one comes to fetch the kids from camp; the news hasn’t caught up to the logistics yet.