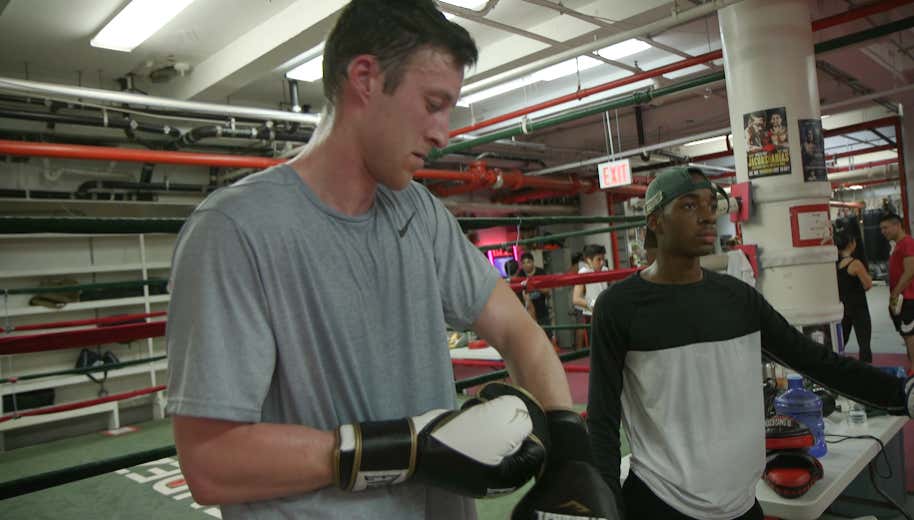 Quick update on my RnR progress: training still blows. I thought things were going to get easier the week of the fight but they’ve only gotten tougher.  My trainers increased the intensity and duration of every. single. exercise. That’s not to say it hasn’t paid off, because it has. I’m running faster, longer, and further than I ever have in my life and my confidence is at an all-time high. In the words of Stevie Janowski…

That said, my entire body KILLS. So much so that I was laying in my bed last night researching fibromyalgia.

This past month has been beyond exhausting. And from what I gather, the level of exhaustion I’ve experienced during training is nothing compared to what I’m going to experience during the fight. I’ve heard it from Smitty, I’ve heard it from Hank, and I’ve heard it from Shaun who reached out to me yesterday with words of encouragement; I will get gassed. It’s just about who gasses first. Who can keep their composure and remember the little things when they feel like they’re about to double over and die.

It’s a scary thought because I have no idea what my opponent is doing to get ready. He could be hanging around burning crosses or he could be training his ass off. I’m completely in the dark. All I know is that I’ve been putting in the work and the entire office, with the exception of Hubbs, who hasn’t liked me ever since I made a short joke four months ago, is behind me.

Which brings me to my next point: home field advantage. Obviously, the crowd is going to go nuts when McAfee introduces my opponent because he’s from Youngstown. Especially considering most of  the 5900-person Cavelli Center Crowd will be from Ohio. But if we’ve learned anything from the 2018 NBA finals it’s that home court doesn’t matter. All I have to do is drown out the noise and focus on the task at hand.

Not sure if I like him getting on the boss’s good side, but if he fights like he talks I should be okay.

We’re five days out from the fight and I couldn’t be more dialed in. I went to the gym last night and was a fucking animal. The “what ifs” are starting to disappear from my mind. I’m going to go in there, take care of business, and go home. That’s all this is– a business trip. A business trip with the added bonus of getting to knock out one of the biggest pieces of shit in all of Ohio. Buy the fight HERE before prices go up.