Being the “finance guy” here, people ask me for old school Wall Street stories exponentially more than they ask for stock specific tips, so I am going to give you one today.  The guy I am going to talk about will be familiar to those who have been in the biz for a while, but I think he will be equally interesting to those who have never seen a BUY/SELL ticket.

His name was John Mulheren, and he is a Wall Street legend.

John made and lost billions during his career, and we weren’t close friends at all, but he came to the aid of my wife and I post 9/11.  He had a partnership with my father-in-law before he (my father-in-law) was murdered, so John had offered up to us his own personal attorney as we (primarily my wife) were saddled with the job of literally sifting through the ashes.  Both emotionally and professionally, we were way ahead of our skis in the weeks/months following 9/11, but with John’s help we (again, primarily my wife) were able to salvage a company, keep survivors employed, and carve out some dough for widows and orphans.

Before I get into the meat of my story, here’s some background on John.  Most of it I cut and pasted.

Mulheren was head of Bear Wagner Specialists and Bear Hunter Holdings, a stock trading firm and market maker, and he had a well-earned reputation as one of the sharpest minds in the brokerage business.

At age 25, he was a managing director of Merrill Lynch, working in the arbitrage and derivative areas. He began his career at G.A. Saxton as an over-the-counter trader in options, derivatives and risk arb.

From 1985 through 1998, he was a managing partner with Jamie Securities and Caronan Partners. Prior to that, he was a partner and member of the executive committee at Spear Leeds.

He liked to say that trading stocks was so simple that even a chimpanzee could do it. He proved his point one day by taking an actual chimpanzee dressed in a suit and tie and letting it run loose on the floor on the New York Stock Exchange.  That was the inspiration behind DiCaprio’s scene with the chimp in Wolf of Wall Street. 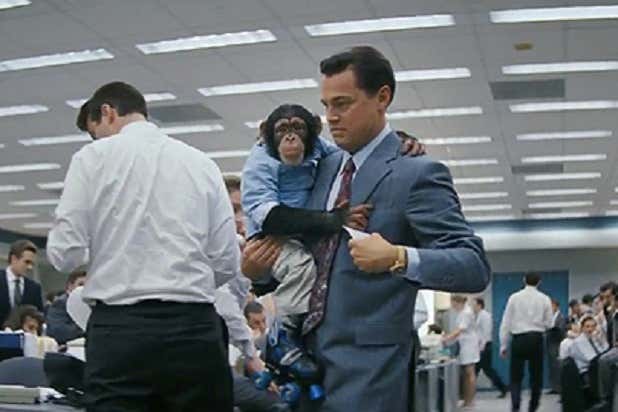 He was implicated in the insider trading scandals of the 1980’s and his personal animosity toward stock speculator Ivan Boesky, who testified in a stock manipulation case brought against Mulheren, was well known. On two separate occasions there were reports of John threatening Boesky with a gun.  In February 1988 John was arrested while traveling on the LIE with a shotgun in his car. At the time, police contended he was heading toward Boesky’s home intending to kill him. This led to him getting the nickname “Shotgun John.”

In his trial for stock manipulation and insider training, Mulheren was convicted and sentenced to a year in prison, but that conviction was subsequently overturned by the Second Circuit Court of Appeals.

Speaking at the 2002 commencement ceremony of his alma mater, Roanoke College in Salem Va., to which he donated more than $500 million ($500 million!) over the years, Mulheren opened his remarks saying, “As I recall, the last time I was in front of a group this large, I think the day started with the statement, ‘May the defendant please rise.’”

For all of his legal troubles, John spent only a month behind bars at Rikers Island. While he was there, he was befriended by mob boss Anthony “Fat Tony” Salerno. Fat Tony was thrilled to have a multi-millionaire in “his” jail.  He sat down on the bunk next to John during Mulheren’s first week at Rikers and explained just how things worked. Once a week someone would show up at John’s house and his wife was to give that person an envelope full of cash in return for protection, better food, and booze. People say that month cost him almost $100k in protection money, but that’s a lot better than rape and prison issued grilled cheeses, I suppose.

He was a TREMENDOUS philanthropist, who donated millions of dollars to hundreds of causes… Primarily anonymously.  He had 7 children total.  I believe 5 were adopted, and some of them adopted after being diagnosed with special needs.

He was a local legend in Red Bank and then the Rumson, NJ area, and for years Mulheren traveled from his home in Rumson to his office in New York via a helicopter that operated illegally out of Sea Bright.

And people think I am a Wall Street character because I blog and do that stupid thing with the wine glass on my head.

I wasn’t aware that John had even died when my wife and I received an invite in the mail to his funeral… Which is a weird thing to type, but we received 2 VIP lanyards and a tastefully crafted invitation.  The passes attached to the lanyards were simply laminated pictures of John in a red velvet suit.

The same picture was used for the little mass cards they gave out at the funeral, and I dug one up for the benefit of this blog. 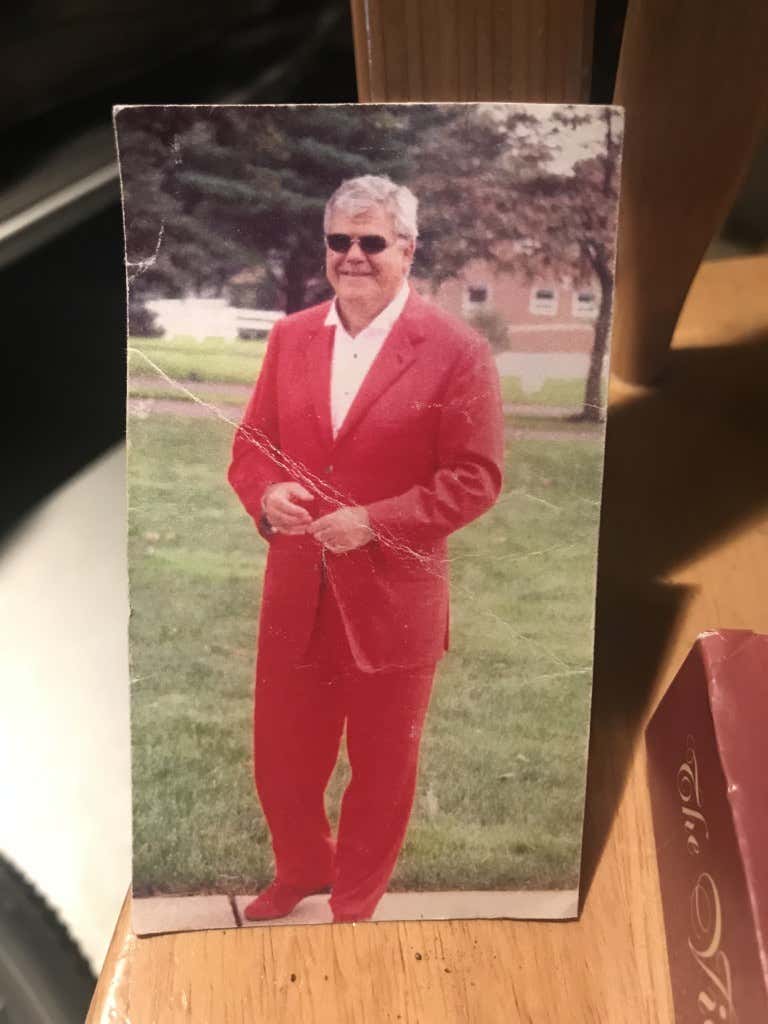 The ceremony was held at a small chapel in Rumson, NJ called Holy Cross, and the lanyards made zero sense to either my wife or I until we pulled up to the church and saw that there were 1,500 people waiting to get into a church that held maybe 400 bodies.

There was a huge tent erected next to Holy Cross, with additional seating and 2 big screen TV’s that were televising the proceedings next door.

I had no idea what the protocol was for us, but as we slipped on our lanyards, security led us deeper and deeper into the crowd, until we realized that our passes were going to actually get us inside the church.

Standing room only, but we found some seats in the middle of a packed pew, and just kinda tucked in as the ceremony started.

— Before I go on.  This funeral was 15 years ago, so if there is anyone who was also there that remembers it in greater detail, feel free to refresh my memory in the comment section.  Otherwise, I am giving you as close of a recollection as I can manage. —

The casket was brought in on a classic firetruck from the 1920’s that John owned. Walking in front of that truck was a women dressed up as a Christmas tree leading a horse that had a pair of John’s boots shoved backward into the stirrups.  There was also a hovercraft in the procession… All of these vehicles were from John’s garage. 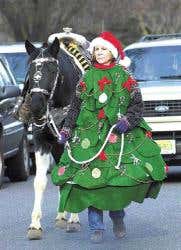 Mulheren’s family were mostly dressed in tacky Christmas sweaters (about a decade before ugly sweaters became a thing), but the pallbearers were in more traditional suits.  One of them, however, was wearing a women’s red jacket and an arrangement of fruit on his head, and I believe that man was the attorney John leant us years prior. 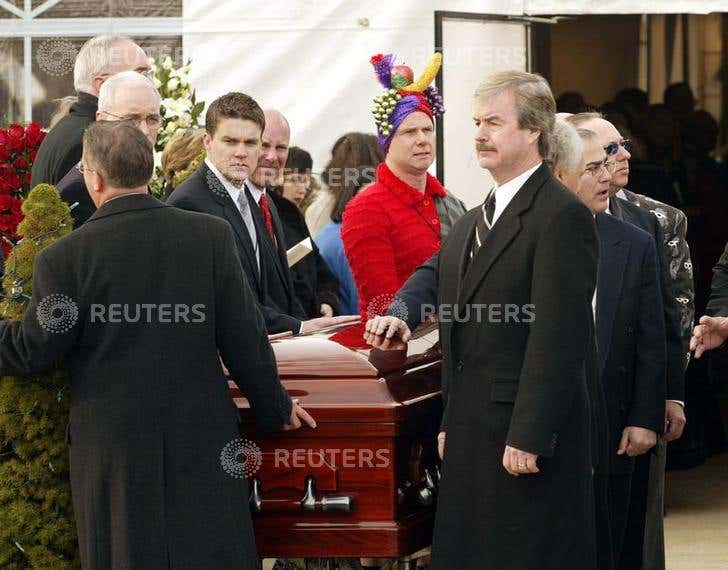 I wish I could dig up some more pics, but there were no photographers inside or outside of the church except the cameramen filming the mass for the simulcast to the poor bastards watching in the tent outside.

When the actual mass started, the priest who got up to eulogize John told a great story about how Mulheren was at a charity function the priest had thrown to raise dough for a new roof. During the event, John had found out he and his wife paid only $500 a plate, so he told the priest to knock the number up to an even 5 grand a piece, and that he would cut him a check in the morning.

The priest went on to say how he passed out when John made the more generous donation. Fell right on the ground.  When he was revived, John had asked him why he was so overcome to the point of losing consciousness.

The priest explained that John’s new $10,000 total donation was going to get them within $25k to fix the roof, which was much further ahead of schedule than the priest could’ve imagined.

The priest ended by saying that the next thing he remembered was waking up in an ambulance after passing out a second time… This time hitting his head on an end table on the way down… And having an anonymous donation of 40 grand delivered to his hospital room the next day.

The musical part of the ceremony began, and a guy named Nils Lofgren came out of the crowd and sang “Wind Beneath My Wings“.  I didn’t know much about Nils at the time, but apparently he was/is a member of The E Street Band, and he sounded very good in the small venue.

After Nils wrapped up, he introduced another person from the audience, and Bruce Springsteen came walking up to the altar with a couple other members of the band.

And then Bruce had asked “his friend John” to come up and help out, and Jon Bon Jovi walked up and grabbed a tambourine.

And that’s when shit got real.

I am not a huge Bruce fan.  Not a huge Bon Jovi guy either.  But seeing both of them perform at a funeral maybe 10 pews away was a pretty surreal experience.

Bruce had introduced himself and his supporting cast, and informed the congregation that after he heard news of John’s passing, he approached Mulheren’s widow, Nancy, about possibly singing a song at the funeral.  Nancy said yes, but only if Bruce was to sing John’s favorite Springsteen tune.

“1, 2, 3, 4… You better watch out.  You better not cry…”, and Bruce and Jon, and Nils, and the girl with the red hair belted out Santa Claus Is Coming To Town standing next to a Wall Street tycoon’s casket.  I don’t think Clarence was there, but they brought the house down nonetheless.

There’s a part in the song where Bruce stops singing and starts just talking to the audience, and when that part came around, Bruce started talking to the coffin while Bon Jovi shook a tambourine behind him.

Bruce pretended he was talking to John inside the box and at one point he said, “What’s that John?… What did you leave Nancy and the kids for Christmas this year?… A GREAT BIG INSURANCE POLICY!!!… 1, 2, 3, 4… SANTA CLAUS IS COMING TO TOWN!”  And everyone began laughing and singing along.

I turned to my wife, and at the same time we said to each other, “Is this crazy motherfucker going to jump out of the casket, and Punk us all?”

They finished up the ceremony, and proceeded back out of the church.  Once they got outside, the pallbearers fired off shotguns filled with confetti for “Shotgun John” one last time, they loaded his remains onto a hovercraft, and John Mulheren rode off into the sunset.

PS:  What should I say to people if they ask me if I have ever seen Springsteen live?